Cold Weather is an experiment that does not quite work but which is all the more beautiful for its failure.

Aaron Katz is one of several young American filmmakers to be tarred with the Mumblecore brush. Neither a genre nor a movement, ‘Mumblecore’ refers to one of those rare and beautiful moments when a group of creative artists with similar tastes and interests come together and begin to learn from each other’s methods and respond to each other’s ideas thereby creating a series of works with a similar set of aesthetic priorities. While these aesthetics are still evolving, it is possible to see in the work of such directors as Andrew Bujalsky (2002’s Funny Ha Ha), Lynn Shelton (2009’s Humpday) and the Duplass brothers (2008’s Baghead) the development of a cinematic style that has been heavily influenced by the films of John Cassavetes, Mike Leigh and Maurice Pialat.

Mumblecore films tend to be made with small budgets, small crews and small casts composed of largely non-professional actors working from and improvising around a more or less pre-written script. The non-professional nature of the actors and the improvisational aspects of the dialogue along with the tendency to frame character development in such a way that the audience has to draw its own inferences about the characters means that Mumblecore films frequently feel remarkably rough, realistic, unpolished and spontaneous. Mumblecore films invariably feel as though they simply ‘happen’; a stylistic tic also that owes quite a lot to the tendency to use 20-something actors and unglamorous settings that make it look as though the films might have been made in the director’s spare time.

Cold Weather is an attempt to move Mumblecore outside of its comfort zone by taking the aesthetics of spontaneous authenticity and fusing them with those of a cinematic genre that is defined by its careful plotting and its use of directorial technique to create a sense of tension. While this Mumblecore thriller never feels like more than the sum of its parts, it is difficult not to love a film that so perfectly understands the allure of a good mystery. 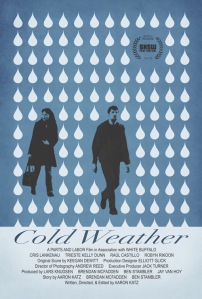 Doug (Cris Lankenau) has recently moved in with his sister Gail (Trieste Kelly Dunn) after dropping out of university where he was studying forensic science. Our first encounter with Doug marks him out as something of a loser as he takes a shitty job hauling ice while explaining to his family and friends that he really has no interest in going back to school. The impression that there is something not quite right with Doug grows apace when he blows hot and cold with his ex-girlfriend Rachel (Robyn Rikoon) and his new friend Carlos (Raul Castillo) when they try to convince him to do stuff like go to nightclubs and science fiction conventions. Doug does not merely turn them down, he turns them down in a way that is both cold, insulting and completely at odds with the fact that he obviously cares about them and likes spending time with them.

Keeping himself isolated from his friends and family alike, Doug is annoyed when Carlos turns up at his door worried about Rachel; she said that she would come to one of his gigs but she did not turn up. We know Doug to be an intelligent man but here he channels his intelligence into coming up with ridiculous reasons for dismissing Carlos’s legitimate concerns about Rachel’s wellbeing. Clearly, Doug is working hard on not giving a shit. 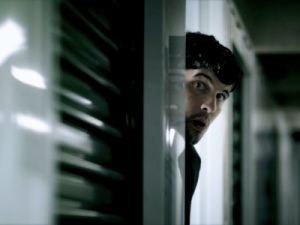 What makes this aggressive sense of alienation so strange is the fact that Doug loves a mystery. Throughout the first third of the film he is never seen without a beautiful hardbound edition of E.W. Hornung’s Raffles stories. We also know him to be a lover of Sherlock Holmes as he presses a copy of the stories onto Carlos. Doug even studied forensic science and criminal law in the hope of becoming a detective. However, when a real mystery presents itself, Doug ain’t interested… until he spots someone watching Rachel’s apartment from a pick-up truck.

At this point, the film transitions from a Mumblecore slacker drama about listless twenty-somethings to a taught and elegantly directed mystery thriller in which Doug tracks down Rachel with the help of his sister who serves as a surprisingly willing Watson to his reluctant Holmes. Using such staple detective tricks as disguises, stakeouts, hitting redial on phones and rubbing a pencil over a pad to gain an impression of the last thing written on it, Doug and Gail quickly realise that Rachel is no legal secretary. 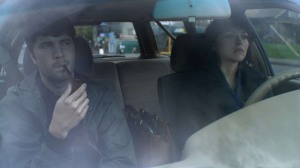 Though very simple by the standards of the increasingly baroque crime genre Cold Weather’s plot is beautifully constructed while Katz’s direction fizzes with delicate intensity. Under Katz’s careful gaze the rain-soaked suburban vistas of Portland, Oregon take on an atmosphere of both sadness and menace while the final reel’s pursuit sequence is a master class in tension. Indeed, once you have seen what Katz can achieve with two slackers and an old car you will come to realise quite how redundant most action film direction really is. With a director as skilled as Katz, you simply do not need explosions, fast cars or Matt Damon stomping about with a fucking earpiece.

Check out the sky

Another particularly nice touch reveals quite how much genre films could learn from Mumblecore techniques. Indeed, while we learn the name of the person responsible for Rachel’s problems, Katz never bothers to show us his face; all we see is a guy in a cowboy hat. This is an inspired piece of direction as it is effectively an adaptation of one of Mumblecore’s key techniques; Mumblecore films (like most contemporary art house dramas) are fond of using negative space as a means of characterisation. Katz does not tell us Doug’s backstory because by conspicuously failing to do so, he is inviting the audience to speculate and thereby drawing them into the film on an intellectual and emotional level. Like 1950s housewives who felt that they had ‘made’ a Betty Crocker cake simply by cracking an egg into the mixture, we feel as though we own Doug because we have deduced his backstory from a few sparse clues. Indeed, we are interested in Doug because he is a mystery that we can play at solving. By keeping the villain’s face and motivations a secret, Katz is using the same technique to create not empathy but tension; because we do not know anything about the villain we cannot help but speculate about him and the intellectual tension created by Katz’s refusal to tell us anything about the villain feeds into the sense of dread that fuels our fear that Doug and Gail might be discovered as they trail him around the city.

While the attempt to mesh the aesthetics of Mumblecore with the rules of the crime genre makes for a film with a somewhat jarring shift in register about half-way through, this shift does provide an interesting commentary on the nature of the detective genre. 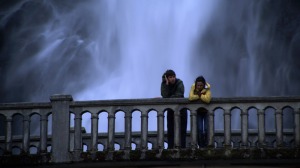 As I said when I wrote about the BBC’s recent Holmesian TV series Sherlock, the detective genre is ultimately a palliative and consolatory mode of writing. In detective stories, the world always makes sense and its hidden truths surrender themselves willingly to the eyes of the sensitive observer. In detective stories, no deaths are random and all details are significant. In detective stories, the world makes sense. Doug is a character who is, for whatever reasons, lost. He started life with the desire to be a detective and the plot of Cold Weather certainly proves that he has the skills to be one but somewhere along the line, his life failed to connect with his goals. All the signs pointed to ‘yes’ and yet the answer was ‘no’.

Doug’s desire to be a detective speaks of his desire to live in a world that makes sense. However, the world cannot make sense to him because the world he lives in (at least initially) is the world of Mumblecore where everything is spontaneous and unstructured: Pre-scripted order and polished results are fundamentally contrary to the aesthetics of authenticity that characterise Mumblecore as a cinematic moment (if not a genre). One could even argue that Doug’s decision to abandon his dreams of being a detective and his hostility to Carlos’s suggestion that something is ‘going on’ with Rachel flows from some instinctive awareness that the world Doug lives in simply cannot make sense. It is telling that, throughout the opening section of the film, Doug carries a copy of the Raffles stories.  Raffles was created to be something of an anti-Holmes; Where Holmes looked beyond the chaos of crime to reveal the fundamental order of the Victorian universe, Raffles was a source of chaos who challenged the establishment by burgling his fellow toffs like the sociopathic tennis coach in J.G. Ballard novel Cocaine Nights (1996). Doug reads Raffles because Raffles personifies the authenticity and spontaneity of the Mumblecore universe. It is only when the world changes that Doug sets down his copy of Raffles and takes up the methods of Holmes. The jarring shift in register at the heart of Cold Weather marks a change in genre and a change in the fundamental nature of the world. Suddenly Doug is not lost… he is a character perfectly adapted to his world; a world whose hidden truths surrender themselves willingly to the eyes of the sensitive observer.