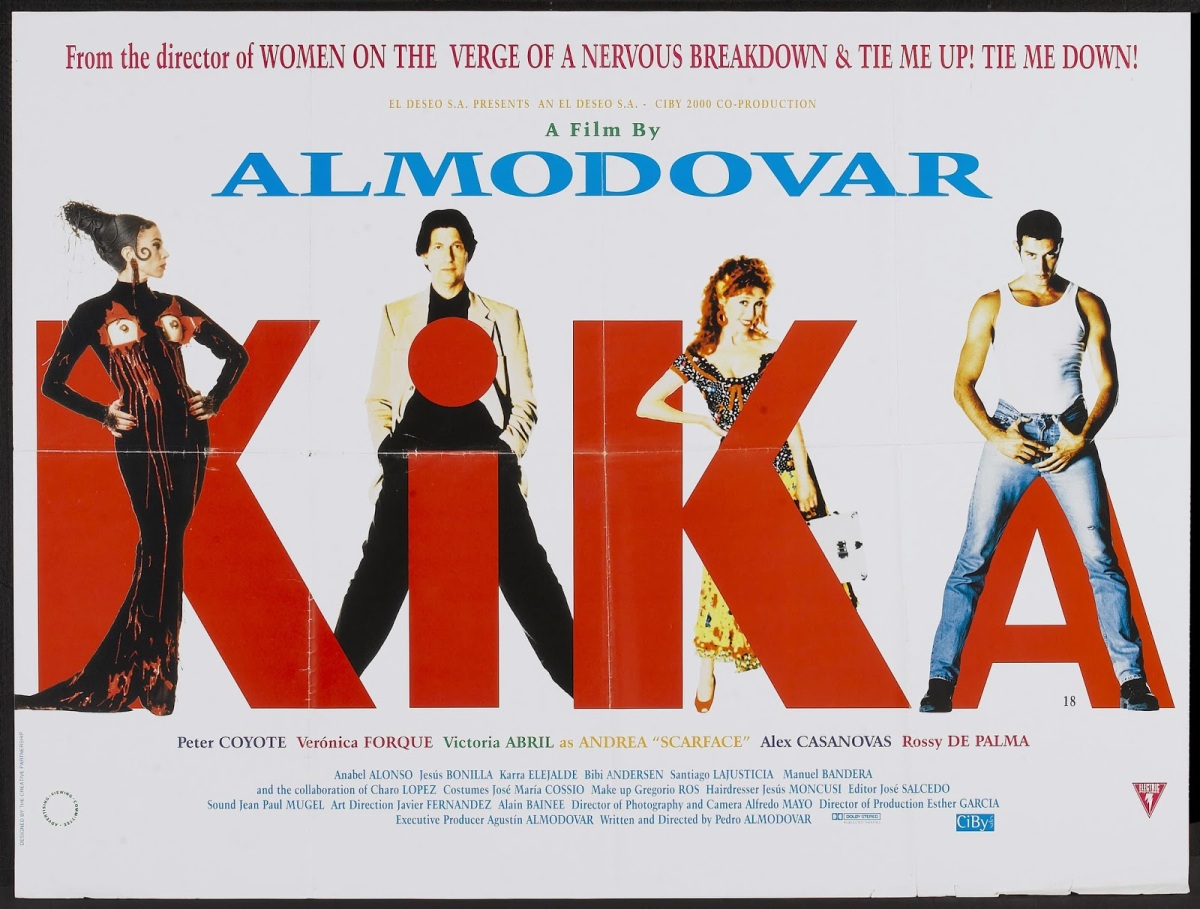 I’m pretty sure that Kika was the first Pedro Almodovar film I ever got round to seeing. I can remember trailers for Women on the Verge of a Nervous Breakdown but I also remember renting Kika based on the insane amount of buzz created by the film and the links it forged between art house cinema and the fashion industry.

If you look back at the comments on my What Have I Done to Deserve This? piece, you’ll find me discussing the importance of Tartan’s Asia Extreme imprint in developing a new generational audience for art house and world cinema. Much like my other area of cultural interest — literary science fiction — art house film reached the 1990s in a state of acute cultural decline. The flea pit cinemas that once dotted London’s West End had been closed by waves of 1980s gentrification and Channel 4 had stopped filling their schedules with cheap foreign films. To this day, whenever someone talks about what it was like to be a cinephile in the 1960s and 70s, it’s a bit like reading a fantasy novel when one of the characters talks about the fall of some great and benign magical kingdom. What-once-was, is now lost and What-shall-be, is yet to come.

Nowadays, when people talk about the popularisation of transgressive images in 1990s popular culture, they use terms like ‘edgelord’ and portray the whole thing as a rather silly and immature experiment in cultural machismo. As someone who was there at the time, I won’t deny that a lot of what drew me to transgressive works was an adolescent and post-adolescent desire for extreme imagery. That aesthetic and those values were fucking everywhere at the time. However, while that aesthetic did create grimdark and usher in a load of problematic tropes that are only now being exiled from common usage, it also served as a really good way of introducing people to culture that they would otherwise never have sought out by themselves. Tartan’s Asia Extreme label may have been constructed to make the most of the J-Horror boom that followed the breakthrough success of Ringu but it did get me used to seeking out and watching obscure and sometimes difficult films.

I remember seeking out Kika because the trailer and marketing materials stressed its transgressive credentials. I also remember thinking that it was all rather light-weight as Almodovar invariably presents his darker ideas and themes in quite a light-hearted manner. Returning to Kika nearly twenty five years later, I can see why I struggled and why I arguably should have struggled more. My FilmJuice review can be found over here.

“The problem with postmodernism is that when the moral purpose of the deconstructive process is overlooked or downplayed (as in films like Natural Born Killers), the techniques of postmodernism result in little more than the commercial process of updating old ideas in an effort to sell them to contemporary audiences. Almodóvar’s films have always been postmodern in so far as they subvert and distort elements of mainstream Spanish culture but while earlier films like Dark Habits and What Have I Done to Deserve This? use their transgressive images to articulate profound emotional truths; Kika seems content to transgress for the sake of transgression meaning that the film’s imagery winds up feeling not just insubstantial but actively exploitative. Turns out that even the most fabulous dresses struggle to conceal the emptiness inside.”