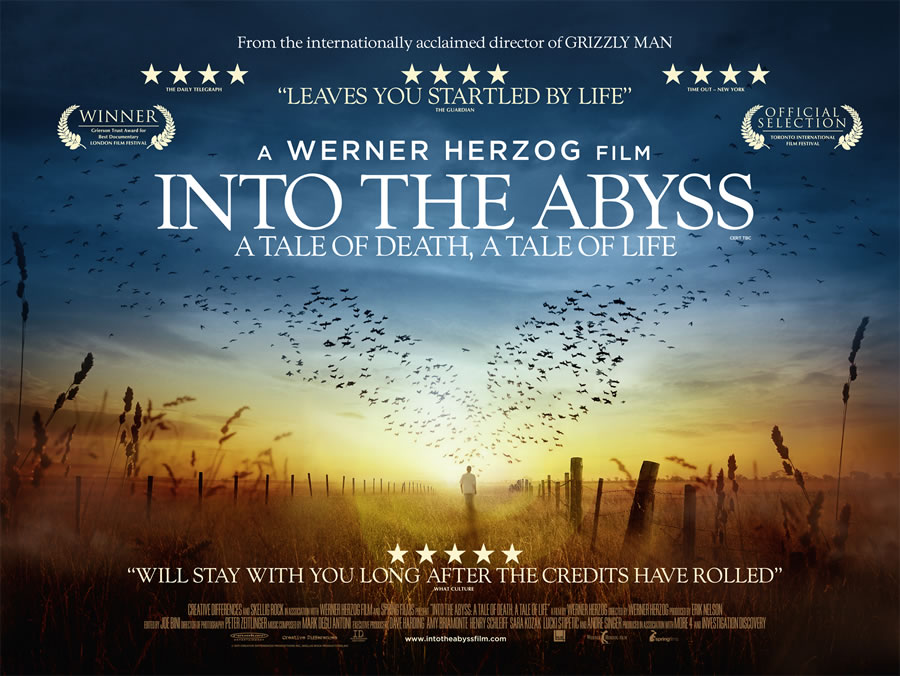 When has Werner Herzog ever made a film that couldn’t be summarised as a journey into the abyss? Early feature films such as Even Dwarfs Started Small and Aguirre, the Wrath of God seem to revel in the existential savagery of the world while more recent documentaries such as Grizzly Man and Happy People: A Year in the Taiga serve as reminders that the world has little time for the collection of bourgeois conceits that we dare to call a civilisation. The question is never whether Herzog will turn his film into a meditation on the savagery of the world, but which tone he will select as a means of approaching it:

Sometimes (as with Encounters at the End of the World and The Bad Lieutenant: Port of Call New Orleans) he is a whimsical fantasist who recognises that silliness is the only possible response to a world so cold and drenched with blood.

Sometimes (as with Fitzcarraldo and Little Dieter Needs to Fly) Herzog is a humanist who marvels at our human capacity to overcome the savage injustices of life.

Sometimes (as with Nosferatu the Vampyre and Aguirre) he is filled with bitterness and cynicism by nature’s ability to dissolve humanity’s finest dreams.

If becoming a cinematic auteur requires a director to develop a recognisable sensibility and carry it with them from project to project then Werner Herzog must be considered one of the most prolific and versatile auteurs in cinematic history. Regardless of whether he is producing documentaries or feature-length narrative films, Herzog is one of the brightest jewels in the crown of world cinema but he is also starting to get on.

Back in the early 2000s, a string of moderately successful films provided the veteran director with a level of visibility that had long since been denied him. Thrust into the spotlight and transformed into a celebrity, Herzog made the most of it by adopting the engagingly self-parodic persona of an austere German filmmaker who muses on the savagery of the world with his tongue planted squarely in his cheek. Long-time fans would not have been surprised by this development as Herzog has always had a fondness for deadpan satire and self-mythologising (the documentary My Best Fiend is at least as full of made up crap about Herzog as it is of stuff about Klaus Kinski). The problem with this moment of visibility is that while it evidently made it much easier for Herzog to secure funding on his next project, it also encouraged him to remain Herzog the whimsical fantasist who undercut his meditations on death and destruction with talk of depressed penguins and mutated crocodiles. Given that Herzog was now reaching 70 and more visible than ever, I was concerned that the whimsical Herzog might become a permanent fixture. Would the bitter and humane Herzogs ever return or would it be nothing but dancing souls and iguanas on the coffee table until the end? Clearly, I needn’t have worried as Into the Abyss is a documentary that shows us an entirely new Werner: Herzog the humane socialist.

END_OF_DOCUMENT_TOKEN_TO_BE_REPLACED

Andrea Arnold is a director renowned for her unrelenting modernity. Set on council estates, Arnold’s first two films are about being on the outside, looking in and trying to find cracks in those protective walls that we call alienation and indifference.  In her directorial debut Red Road (2006), Arnold tells the story of a CCTV operator who finds herself becoming obsessed with observing a man she happens to recognise. Now used to experiencing life through a lens, the operator follows her target into a party and dances with him. Horrified by the intense colours, sounds and sensations of reality, the operator runs from the party and vomits in a lift. Seemingly, real life was just too much for her. A similar withdrawal from the world features in Arnold’s follow-up picture Fish Tank (2009) where a teenaged girl observes her mother’s relationship with a local lothario. Initially treating this interloper as a potential father figure, the girl soon finds herself being lured into the waters of adult sexuality by waves of unexpected kindness and discrete flirting. Believing she is in control of the situation, the girl pushes harder and harder at the limits of her childhood before the complexities and inequalities of adult life threaten to overwhelm her, forcing her to withdraw to a state of adolescent seclusion where everything makes sense and lessons can be learned in relative safety.

While there is no denying that Arnold’s adaptation of Emile Bronte’s Wuthering Heights (1847) constitutes something of a departure for the director, the film’s novelty lies not in its period setting but in the refusal of its characters to back down when confronted by a world they do not really understand. Arnold’s Wuthering Heights is a film in which madness and obsession confront reality and reality loses.

END_OF_DOCUMENT_TOKEN_TO_BE_REPLACED

A lot has been made of this game’s boss fights and the myriad niggles and irritations that conspire to make its game-play something of an uphill struggle. I will not deny, this game inspired more rage-quits than any game in recent memory. However, rather than seeing these irritations as products of genre-confusion and outdated game design, I decided to consider these problems as part of the game’s central aesthetic and sub-text. I conclude that, whereas the original Deus Ex games were all about empowering the player, Deus Ex: Human Revolutions is all about claustrophobia, prejudice and being forced into a position of willing servitude:

Taken together, these racial and economic narratives combine to create an almost intolerable atmosphere of disempowerment. Whereas Deus Ex sought to empower its players, Deus Ex: Human Revolution constantly reminds them of how worthless and incompetent they really are. Playing DXHR is like spending an afternoon with a depressed and alcoholic mother who is not only disappointed with what you have made of yourself, but also insistent on letting you know how she feels about your failure as an individual. However, as unpleasant as DXHR can be, it is an intensely enjoyable game. Indeed, the game’s real thematic power lies not in its narratives of disenfranchisement and oppression, but in the fact that it keeps us coming back for more in spite of them.

All too often, reviewers tend to assume that any mechanic that is not fun is broken. I simply could not disagree more, all mechanics tell a story… you just need to open your mind and play the story that the game wants to tell.