Art is a conceit and cinema doubly so.   For all the demands for greater realism and protestations that one is producing cinema verite, the director can never hope to capture reality itself on film.  If a director is holding up a mirror to the real world with the help of actors, camera crews and sound technicians then the distortions are so great that, in a sense, the director might as well be making a super hero film for all the truth that he has managed to capture on film.  The very artificiality of artistic endeavour means that it is forever on an ontologically slippery slope.  Indeed, consider the evolution of forms of story-telling such as the three act structure or the buildungsroman.  These evolved in order to communicate certain kinds of truths but all too often the demands of the form come to dominate to desire to communicate truth.  Real life seldom fits into a three act structure.  What started off as abstraction from reality quickly becomes obfuscation of it as the cinema begins to create its own fictional worlds.  Simplified parodies of the real world.  Childish facsimiles in which the good guys always win and the cute couple always wind up together.  These forms can then solidify into genres, traditions of stories that follow the same rules or which evolve with the rules in mind.  The original truths behind the rules and the forms long since ignored and abandoned.

Because of this tendency to confuse the cause with the effect, discerning audiences have come to value ambiguity in their stories.  Ambiguity that fills a space normally reserved for boldly fraudulent declarations of how the world works.  Ferocious defences of the natural order of purely literary universes.  This deliberate ambiguity is seen as a sign of intelligence as it is a reminder that there is a universe outside of the artistic, the traditional and the conceptual.  A universe more complex and more intriguing than could ever be captured by a single piece of art.

Andrea Arnold’s Fish Tank is a film that has internalised this understanding of the nature of art.  Ostensibly a formulaic coming-of-age/loss-of-innocence story, its strength comes from a willingness to explore not only the ambiguities within the characters, but also within our perceptions of those characters.

Mia (Katie Jarvis) is a teenager living on a council estate.  When we first encounter her, she has just had a falling out with a friend of hers (“you know what I’m like”) and now finds herself completely alone.  Isolated from her peers and her family, Mia spends her time practising dance routines in an abandoned flat on the estate.  She dreams of being a dancer but will not dance in public.  She even attacks some girls who do practice their dance routines in front of others.  This isolation is suddenly shattered when Mia is found dancing in the kitchen by her mother’s new lover Connor (Michael Fassbender).  Connor’s effect upon the three females of the household is immediate.  He first appears stripped to the waist and rippling with muscles.  He praises Mia’s dancing and chats with her amiably.  The teenager feels uncomfortable and predictably lashes out at him, and yet she is intrigued enough to want to spend time with this new person when the family go out for a drive together.  As the days pass, Mia and Connor’s relationship improves.  He encourages her to dance, lending her his video camera so that she might apply for a job as a dancer and he even gives her money so that she can go off and get drunk with one of the local lads she flirts with.  As a result of this warmth and affection, Mia and Connor wind up having sex.  This causes Connor to leave Mia’s mother and return home.  A home he shares with a wife and child.  Upon discovering the existence of this family, Mia abducts Connor’s daughter but then returns her to her family.  An act that earns her nothing more than the back of Connor’s hand across her face. 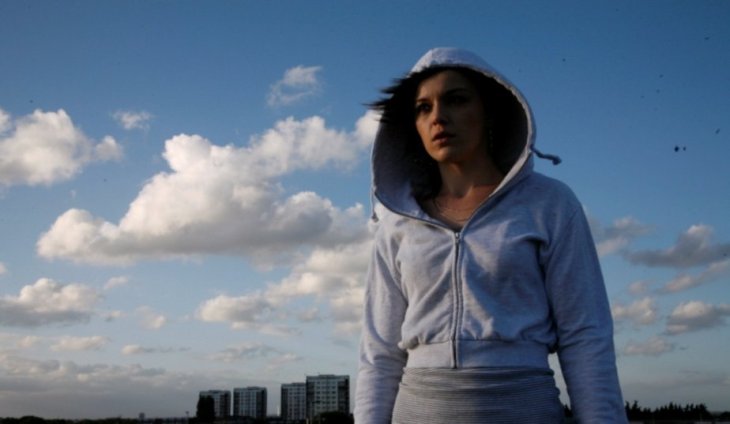 Mia is a deeply ambiguous character. Her behaviour is mostly that of an adult : She drinks, she swears, she stays out all night.  In fact, initially, it is quite difficult to work out how old she is supposed to be.  It is not until reference is made to Mia’s schooling that we can start to guess that she might be under sixteen and it is only once Mia and Connor have sex that we know for certain that she is fifteen years old.  This ambiguity is exacerbated by the way in which the film handles the other women in Mia’s household.  Indeed, Mia’s little sister Tyler (Rebecca Griffiths) is even more foul-mouthed than Mia and she is also seen smoking and swigging from a can of cider.  Even more de-stabilising is the fact that Mia and Tyler’s mother Joanne (Kierston Wareing) is presented as being just as childish as her daughters.  She seems to think of little aside from getting drunk and dancing with her friends.  The relationship between the three females is also intensely immature, like emotionally incontinent children, they scream at each other, call each other names and ignore each other out of spite, anger or genuine grievance.  Nobody wants to be hurt and so you get your digs in first.  Attack attack attack.  In Mia’s family, nobody assumes the role of the mother and so neither of the girls assume the role of a child.  In effect, all three characters seem to be at the same level of emotional and intellectual maturity.

The ambiguity present in Mia filters through into the relationship she has with Connor.  Here, Andrea Arnold brilliantly muddies the ethical waters by establishing a relationship with an exquisitely precarious balance of power.  Initially at least, we are encouraged by three separate factors to see the relationship in a positive light :

Firstly, Connor behaves like a perfect gentleman.  He is warm and affectionate with Mia but he never flirts with her or takes advantage of her when she is in a position of weakness (such as being passed out drunk).  His actions are, if anything, paternal.

Secondly, while Connor’s behaviour is not sexualised, Mia’s is.  She spies on Connor while he is fucking her mother and then watches footage of him getting dressed with a hand laid across her groin.  She also goes out of her way to press up against Connor and parades her not-quite boyfriend in front of him almost as a challenge.  A challenge Connor picks up on during sex, asking Mia if his cock is bigger than her boyfriend’s.

Thirdly, Mia’s adult behaviour patterns and the lack of a ‘more grown-up’ character in her circle means that we are encouraged to see Mia as dysfunctional but grown up and capable of having the degree of sexual agency she has in her dealings with Connor.

These three factors combine to create an impression that Mia’s attraction to Connor is not only natural but a positive thing too.  When Mia films Connor as he is getting dressed, we see it as a playful expression of risk-free adolescent sexuality.  Because Connor is passive, we think that Mia is safe and, even if Connor were to return Mia’s feelings, it is clear that Mia is grown up enough to possess sexual agency and make these kinds of decisions for herself : She wanted it.  Not Connor. 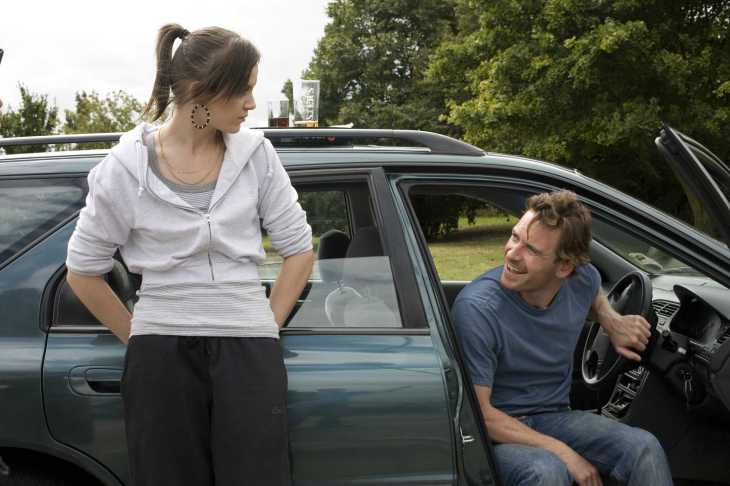 However, the second a drunk Connor asks Mia to dance for him, a second interpretation of the relationship presents itself.  Suddenly, Connor becomes an exploitative predator.  A man who used his paternal position to seduce a fifteen year old girl.  In the wake of this realisation, all of Connor’s actions must be seen in a different light.  Did he intentionally give her money to get drunk in the hope of lowering her defences?  Did he get Mia’s mother drunk in order to get her out of the way?  When he encouraged her to dance, was he encouraging her to express herself or was he wanting her to shake her arse at him? 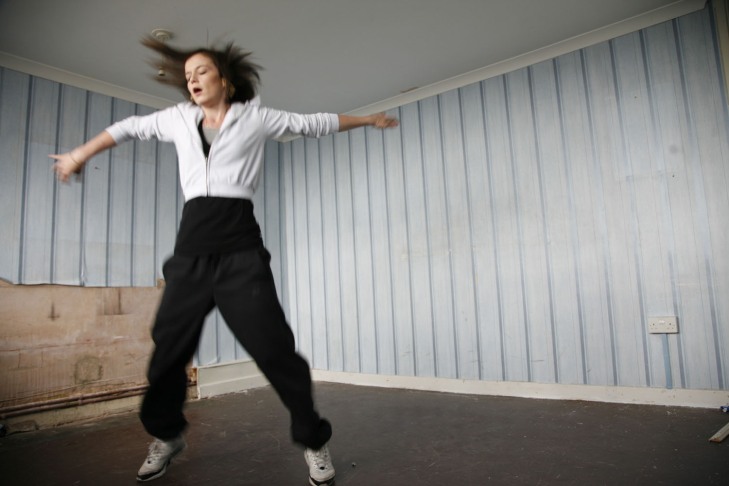 The relationship is ambiguous as the question of Mia’s sexual agency is itself ambiguous.  This ambiguity lies at the very heart of the film and Andrea Arnold does a wonderful job of making sure that the audience never gain enough of a foot-hold to reach the basis for clear moral judgements.  In addition to being written as being in a state of arrested emotional development, the film’s female characters are forever being cast and recast with the trappings of both adulthood and childhood.  For example, after carrying Mia to bed, Connor also carried Tyler to bed.  This seems to suggest that his desire to hold Mia was purely pragmatic and parental, not sensual.  Similarly, after Connor has seduced Mia, we are shown footage of Connor’s daughter singing.  When Connor encourages his daughter, he does so in the same way as he encouraged Mia to dance, calling into question whether his encouragement of Mia actually did have a secret agenda after all.  However, the most powerful act of recasting comes towards the end of the film when Mia abducts Connor’s daughter.

Unsure as to what to do with the girl she has kidnapped, Mia marches across some fields.  When the little girl will not walk, Mia begins to scream at her in the style of a council estate mum.  This gives us an image of Mia’s future, transforming her from vengeful child to single mother.  Her mother.  However, when Connor catches up with Mia he simply cuffs her like a misbehaving child.  Again, Mia is reduced to the status of an adolescent.

Fish Tank is a extraordinary film because, despite being a coming-of-age drama, it is actually all about the lack of clear dividing lines between adulthood and childhood.  Growing up is not a question of black and white but rather of endless shades of grey.  Perhaps there is no black or white.  Perhaps all distinctions between the different stages of life are arbitrary simplifications of a world that is too complex for simple moral and psychological judgements?  Arnold beautifully captures this ambiguity in one of the film’s final scenes as the three females dance together, perfectly in step, to the same piece of music.  Clearly, if maturity is something that is evident in a person’s actions then they are all equally mature and immature.