I’d like to begin this day’s entry with a few words on preparation.  In the bumph we received from Hadrian’s Wall Ltd, there were frequent allusions to the need for us to be both physically and psychologically prepared for the walk.  Reading this, we made fun of the idea that a few days’ walking in the countryside might require a rigorous regimen of fasting and meditation. Oh the folly of innocence! 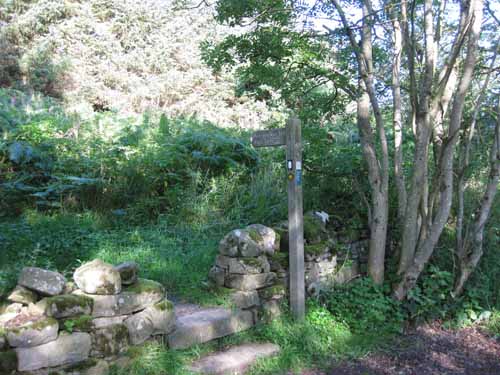 Where our day began

The day began with a long climb up an escarpment.  Chollerford behind us, we slowly made our way into Nurthumberland National Park where hills meet sky and sky meets blasted moorland.  We had decided to stop for lunch at Sewingshields Crag as it was about three hours from the start and boasts a magnificent view over a series of lakes. We also decided to stop there because we mistakenly thought that Sewingshields was the highest point for that particular day’s walking.  This is where the folly and innocence kick in…

A Succession of Crags

While Sewingshields is indeed a big hill and one of the highest points on the entire walk, it is followed by eight more crags.  Crags which, though not necessarily as tall as Sewingshields, are much tougher both to climb and to descend because of how steep and close together they are. After Sewingshields, the first crag was tough enough but each crag we climbed revealed another crag… and another and another… Such climbs are not only physically demanding and occasionally quite dangerous (the crags prompted one fall, one vertigo-induced freak-out and a hurricane of pissing and moaning), but also morale sapping.  Even though the crags were not in and of themselves that tough, the fact that we approached them completely ignorant of both their existence and their number transformed a challenging walk into a grim death march that resulted in us eventually deciding to abandon the official Hadrian’s Wall path and follow the much flatter Military Way that skirts the base of the crags. Yes, we are cowards and yes, we are quitters, but we arrived at these crags with 10 km in our limbs and a complete lack of mental preparation. 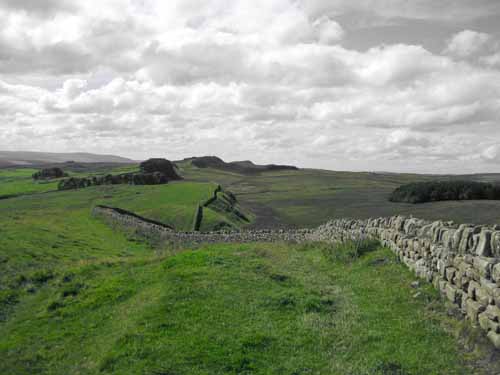 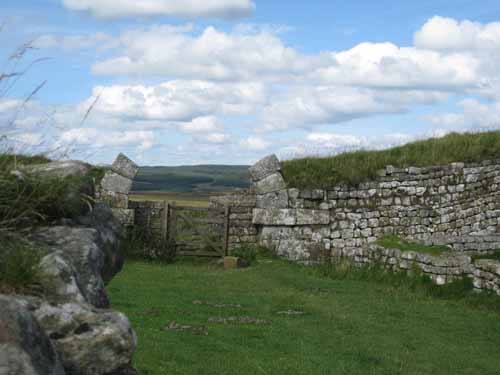 Remains of an Archway 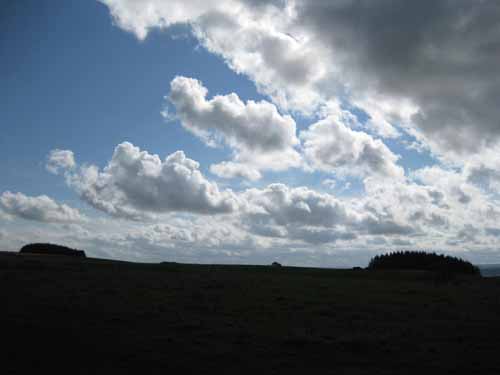 As I am on the subject of mental preparation, it strikes me that this might be a good time to address the question of mind-set.  Even if you are an experienced walker, morale and mood are still vital to ensuring both that you make good progress and that the walk remains ‘fun’. One thing I noticed is that mood tends to track blood sugar levels quite closely. Setting off after breakfast, spirits are invariably high and conversation flows easily but leave it a couple of hours and conversation may well dry up.  This sometimes leads to what the Sheep memorably referred to as ‘trudge mode’ in which you walk along looking at your feet and thinking only about how tired you are and how miserable you feel. We got around this problem by keeping up a constant stream of clicks, hoots and inane in-jokes (such as shrieking ‘SHEEP!’ every time we saw a sheep despite the fact that the fuckers are EVERYWHERE). However, when limbs start to ache and the road refuses to end, it is all too easy for the trudging to turn toxic and this toxicity can all too often lead to the sort of sniping and venting that only serves to lower morale and make the walk that little bit harder for everyone. Once this happens, the only solution is to stop and have a cup of tea.  This sounds very trite and British but it is astonishing how well this tactic works as the break not only clears the psychological slate but also brings with it a sugar rush that can carry you to your destination and lighten the mood considerably.

A Spot of Tea

The crags negotiated, we left the path in search of our B+B. The B+B was actually further into the Northumberland National Park than the Wall and so we felt as though we were moving out into the wilds.  We followed a winding road off the path and crested a few hills before seeing a farm in the distance.

Arriving at Saughy Rigg Farm we were met by a pair of very friendly trail hounds we assumed to be residents of the farm.  As nobody seemed to be about, we wandered around the farm buildings until we encountered a pair of guests and made our way to reception where one of the proprietors poured us a cold drink and mumbled distractedly about the hounds having just turned up out of the blue.  Evidently, the hounds had nothing to do with the B+B but the owner did not seem particularly concerned.  Further animal incursions included the brisk removal of an ambling pusscat during breakfast and the occasional mournful cry of a sheep. This atmosphere of lovably shambolic welcome pervaded our time at Saughy Rigg and really contributed to the B+B’s charm.

Because we had chosen to do the walk in seven days, we spent two consecutive nights at Saughy Rigg with only a half-day’s walking on both of the days.  This actually worked out beautifully as Saughy Rigg Farm has a wonderfully relaxed atmosphere, beautifully comfortable beds and some of the best food we experienced on the trip.  When we were given the menu and told that we had to order half an hour before we wanted to eat, our hearts sank as the choice of dishes seemed far from inspiring.  However, lurking beneath the pub menu language lurked a fantastic array of dishes that were not only delicious and varied but also surprisingly cheap.  Particularly impressive were the duck, the vegetarian options and the puddings.  Breakfasts at Saughy Rigg were delicious and the proprietors were more than happy to ferry us back and forth to the Wall as we made our way along it.

For those of you who may have stumbled across this post, here are all of the posts in the series: