The day began with the sort of breakfast you might expect from a faded seaside hotel.  People sat at tables with white linen tablecloths looking out of a huge picture window at storm-ravaged British coastline.  Alongside the apple and orange juice sat a pitcher of tomato juice, some Tobasco sauce and a few sticks of celery.  Penance, no doubt, for a night on the Courvoisier. Breakfast was decent but no more.  Neither quantity nor quality was anything other than fine.

Bags packed, boots laced, stomachs filled, we headed off on our first day’s proper walking.  Gary had suggested the possibility of walking from Tynemouth to Wallsend in Newcastle but this prospect seemed to appall us both.  We were there to walk the Wall.  Tyneside’s cheap, clean and efficient Metro took us into town and deposited us at Wallsend, near Segedunum and the old Swan Hunter shipyards.

The Remains of Swan Hunter 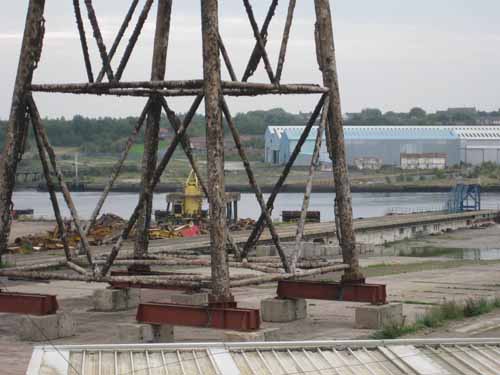 Clearly, Swan Hunter was once an immense presence on Tyneside. The complex’s fences were a long way from the river and while we could see some activity in the distance, most of what we saw was ruins of Britain’s industrial past.  The fact that we were setting off to walk the remains of a vast Roman ruin by passing through a vast British ruin seemed oddly appropriate and I warmed to the place immediately.  There is such poetry and pathos in these old buildings, ignore anyone who dismisses this section of the wall as ugly industrial wasteland for clearly they have no soul. 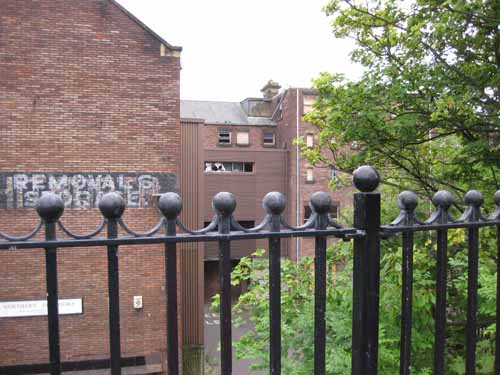 First Steps along the Wall Path 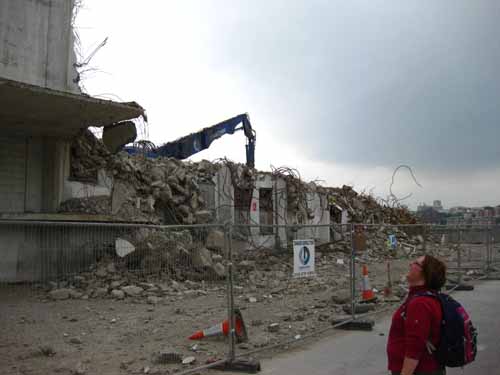 Moving through the suburbs, we soon arrived at Newcastle’s riverside area.  What we discovered were a lot of appropriately impressive edifices built as a result of the latest wave of ‘Development’. As Jonathan Meades once pointed out, ‘Development’ is term pioneered during the Thatcher years and inspired by Nazi attempts at boot-strapping under-developed areas into a more middle-class condition.  ‘Development’ means government cash. ‘Development’ means old buildings turned into offices and apartment complexes. ‘Development’ means ‘eye-catching’ architecture. Sure enough, the further we moved into Newcastle itself, the more benches and conference centres we encountered that expressed their pride at being in Gateshead or a European City of Sport. This sort of civic pride invariably reminds me of the comic Bill Hicks’ remarks upon whether or not he was proud to be an America:

“Um, I don’t know, I didn’t have a lot to do with it. You know, my parents fucked there, that’s about all.”

I’m not sure whether a conference centre can be said to have parents but I’m pretty damn sure that said conference centre had absolutely no say in where those parents might have fucked and so I doubt very much that a conference centre can be proud to be in Gateshead.  Category mistakes and architectural anthropomorphisation aside, a lot of money has clearly been pumped into Newcastle in order to create for it a post-industrial identity and the results are undeniably impressive. Newcastle benefits from the fact that its last wave of development was not only recent but also came at a time when it was fashionable to repurpose rather than simply tear down old buildings. Look at London’s dockyards and you find mostly new-built buildings as the old industrial buildings have all been knocked down by waves of developers.  Newcastle has seemingly moved from post-industrial wreck to aspiring post-industrial space and the transition works nicely precisely because there is no trace of previous attempts at economic or cultural reinvention. 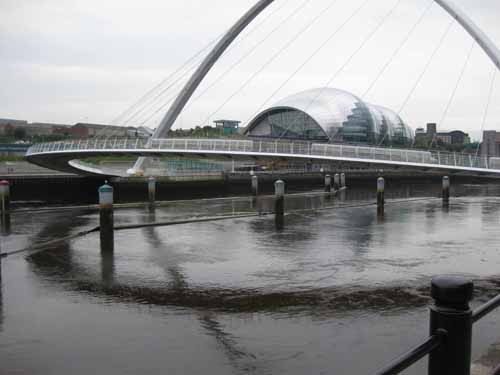 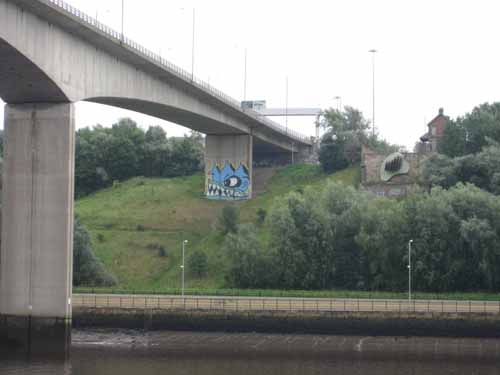 Newcastle is not that large a city and we soon moved out of the city centre and onto the long stretches of largely undeveloped riverside.  Here there are roads, there are pleasant places to walk and the river itself looks lovely despite the stinking sludge it contains. So much empty riverfront space speaks of a development gold rush that simply never came.  Where are the corporate headquarters? Where are the shopping malls? They are conspicuous by their absence and that absence makes for a strikingly beautiful city.

We had expected to have lunch in the nearby village of Lemington but the only places we found were a takeaway and a grungy-looking leisure centre and so we decided to press on to Newburn for a late lunch. Newburn is the name of the village where we had been booked to stay overnight but rather than eat two meals at our B+B, we decided to stop off at a pub called The Boathouse. The Boathouse is very much what you would expect of a local pub in the North East, its booze is cheaper than its soft drinks, Katy Perry blared from the jukebox and the bar was full of 20-somethings getting pissed at 2 o’clock in the afternoon.  Ah, diminished aspirations!  Somewhat surprisingly, lunch was delicious.  My omelette came with a generous and well-constructed salad and the omelette itself was cooked to perfection and packed with flavour while the Sheep’s cheese and onion toastie was everything you’d want from a cheese and onion toastie. 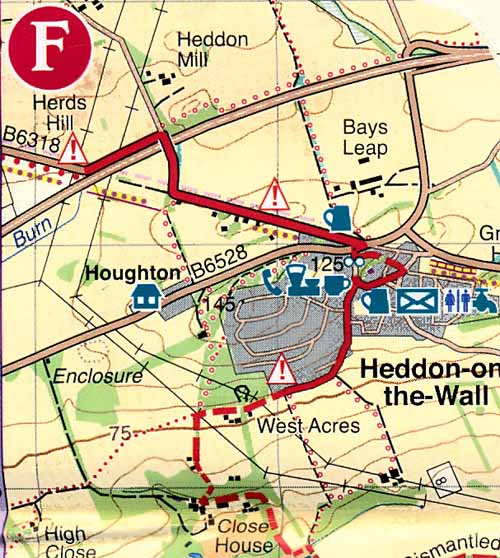 You can probably work out where we went wrong... needless to say, no good ever came from our decisions to depart from the path

Seeing as it was still early, we decided to walk ahead in order to cut down on our projected eighteen and a half mile walk on the third day.  Initially, we did quite well but, upon arriving at Heddon-on-the-Wall, we made the crucial mistake of trying to take a short-cut round the village.  Gary had told us that there was a bridleway to watch out for but we evidently missed it and wound up spending a couple of hours wandering around the foresty bits of a golf course and traipsing up and down a heavily-trafficked B road with no verges.  Eventually, we got back on track and made our way up to Harlow Hill where we discovered there to be no fixed bus stop.

We thought this might have been the bus stop. Turns out it was a McDonalds advert. In the middle of nowhere.

Still a Pretty Part of the World

As with the bridleway mishap, our expectation of a bus stop was derived from our map. However, as with the bridleway, our map proved somewhat misleading and we had to stand on some random street corner and hope that a) a bus would pass and b) we could flag it down when it did. Mercifully, a bus did eventually turn up allowing us to endure the somewhat soul-destroying experience of sitting on a bus for fifteen minutes, traversing a distance it had taken us about four hours to walk. By the time we made it back to our B+B we were very tired and very hungry, which turned out to be a bit unfortunate. 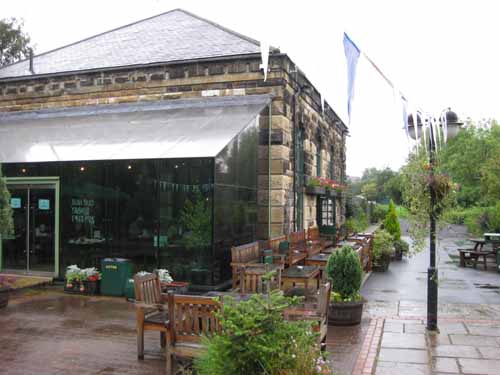 The Keelman’s Lodge is a recent adjunct to The Keelman’s public house made up of a number of out-buildings a safe distance from the pub and its beer garden. Our room was clean and bright and boded well for our evening’s stay.  Then we went to eat in the restaurant…

The restaurant itself was hot and noisy.  The menu was very much what you would expect from a pub.  The Sheep ordered toad in the hole and I went for some grilled trout.  We also ordered some side dishes.  The waitress who took our order was surly to the point of outright hostility.  Refusing to write anything down, she promptly forgot half of our order.  She also seemed to spend the bulk of the evening chatting to regular customers while a much younger waiter struggled to keep control of two quite busy sections.  I suspect this waitress may have been used to working behind the bar but I have never encountered such obvious contempt as that contained in the waitress’s stare as we ordered.  Maybe it was the green toenail varnish? Despite being priced at a level that make it competitive with many of London’s better mid-scale restaurants, The Keelman’s food is uninspired and not particularly well made… The Sheep’s pudding was particularly horrific as something advertised as a home-made brownie and ice cream covered with melted white chocolate sauce transpired to be a flavourless brick of brown matter covered in what I assume to have been the semen of a diabetic: milky white sugary goo.

The Keelman’s is a micro-brewery and if you enjoy your beer, I suspect it is lovely.  It certainly has a nice beer garden out the back.  However, should you find yourself staying there overnight, I would recommend eating at The Boathouse as the staff are friendlier and the food is both cheaper and considerably better.

For those of you who may have stumbled across this post, here are all of the posts in the series: