One of my greatest bugbears in fiction is the concept of the “well-drawn character”.  If we wants to talk about a film in terms of its mis-en-scene or its shot selection then we can read books and treatises about such matters.  Books filled with Eisenstein’s montages and Welles’ long takes.  Similarly, if we want to talk about a book in terms of its narrative structure or its subtext then one can read Aristotle’s Poetics or the countless introductory guides to literary theory that fill the book shelves of people who really should be reading the original source material.  These elements of fiction are well understood.  Their subtleties catalogued.  Their aesthetics understood.  But what about the aesthetics of character construction?  What distinguished a well-drawn character from a tissue-thin one-dimensional empty suit?

Presumably this area of aesthetic achievement is comparatively less well-travelled because, as humans, it should be obvious to us which characters are believable and which are not.  We humans deal with each other quite a lot and so we presumably have a firm enough grasp of human psychology that we should recognise a character who is ‘off’ and unbelievable.  Perhaps they behave in an erratic manner, perhaps they do not speak in a voice of their own, perhaps their actions do not follow from what we know of their character.  In effect, we our ability to detect poorly drawn characters flows from the same place as our ability to read and interpret other people’s emotional states, the catalogue of theories, intuitions and received opinions that philosophers call Folk Psychology.  However, some philosophers question the validity of folk psychology.  They argue that most of our understanding of human behaviour is based on absurdly simplistic theories that are little better than superstitions.  I share this doubt.  This is why every act of characterisation strikes me as explicitly theoretical.  Underpinned by all kinds of beliefs about the way humans work which may, in fact, be profoundly flawed or ludicrously simplistic.

Alfred Hitchcock’s Marnie is a film that wears its Folk Psychological assumptions on its sleeve.  It is a work of drama where the character arc of the main character is sketched not in bland generalities but in explicitly Psychoanalytical terms.  The result is not only a fascinating character study, but also a meditation upon the moral status of psychoanalysis as an activity. 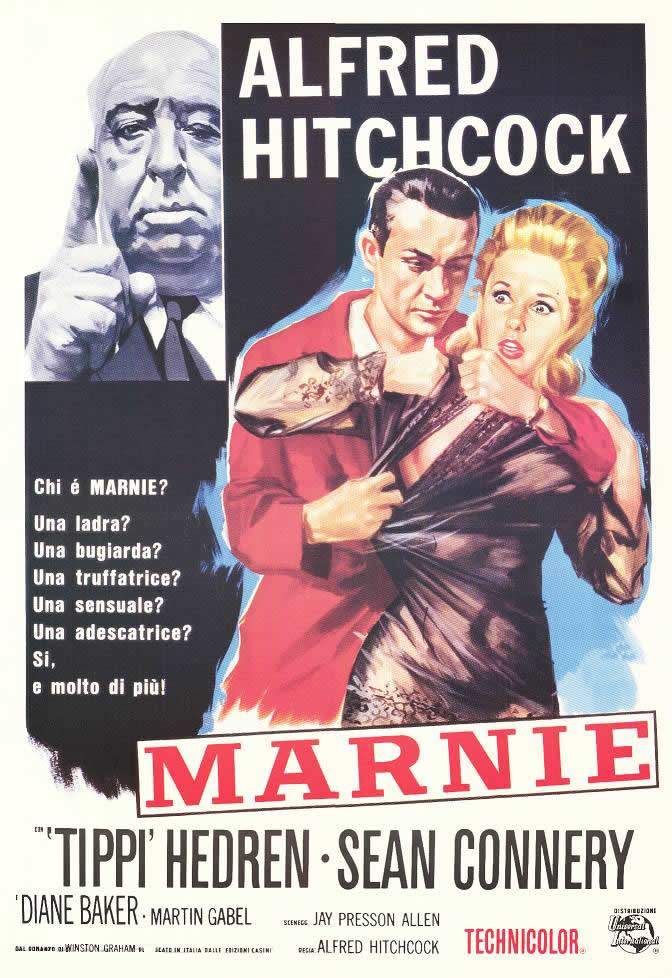 We first encounter Marnie walking along a train platform.  The camera zooms in on her handbag and the bag stays in the middle of the frame as she hurries along.  We do not see her face until she reaches the hotel.  Once in the hotel, she washes her black hair and the the blackness starts to seep out into the water, leaving her blonde.  For the first time, we see Marnie’s face.  She is played by Tippi Hedren.

Close-up On the Bag

Bag again plus You Know Who

Marnie is a thief.  Not only did she steal from her employer Mr. Strutt, but she seems to have done it time and time again.  Indeed, as Marnie packs a new suitcase for herself, we see her leafing through a series of social security cards until she finds the identity she wishes to assume.  From there, Marnie travels to a hotel where she is known by another name.  She immediately leaves the hotel and visits a local stable where she enthusiastically rides her huge and powerful black horse.  She then visits her mother, a strange woman who baby-sits for a small blonde girl who could be a younger version of Marnie.  Marnie manifestly hates this little girl.  She feels threatened by her presence.  But not as threatened as she does by the red flowers someone gave her mother. 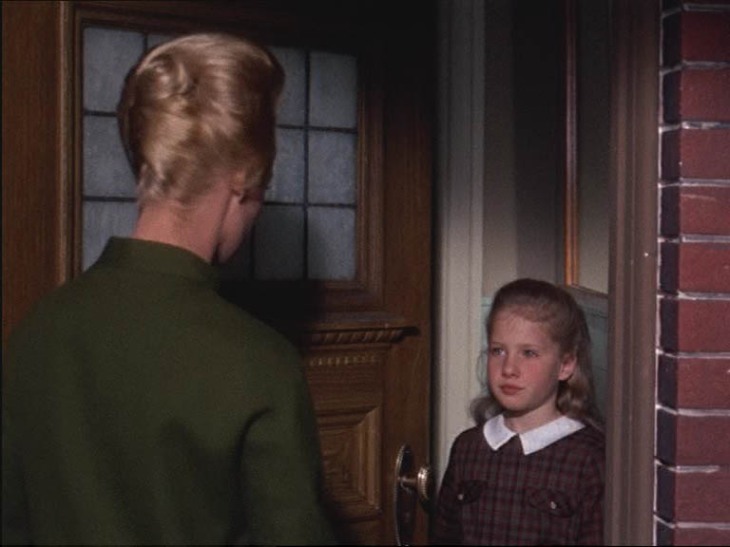 If you could see her face you’d see Marnie looking daggers.

Marnie’s mother’s street. If it looks like Liverpool that’s because it probably is. The original book is set in Britain.

Having spent the money she stole from her old job, Marnie finds a new job with a publishing company.  The boss of the company Mark Rutland (Sean Connery) immediately notices her.  Marnie, meanwhile, only has eyes for the company safe.  However, while she is staking the joint, Marnie makes friends with her boss who takes her out to the races.  While at the races, Marnie sees a jockey wearing red and white silks and she freaks out.  Suddenly acutely aware of how close her relationship with Rutland has become, Marnie decides to clear out the safe and go on the run.  She does this but Mark unexpectedly tracks her down.  He tracks her down and he blackmails her into marrying him.  Not only that but he sets about trying to pick apart Marnie’s fragile psyche, working through her phobias and investigating her past in search of a traumatic event that might have made Marnie into the dishonest, kleptomaniacal, frigid and frankly demented woman she is. 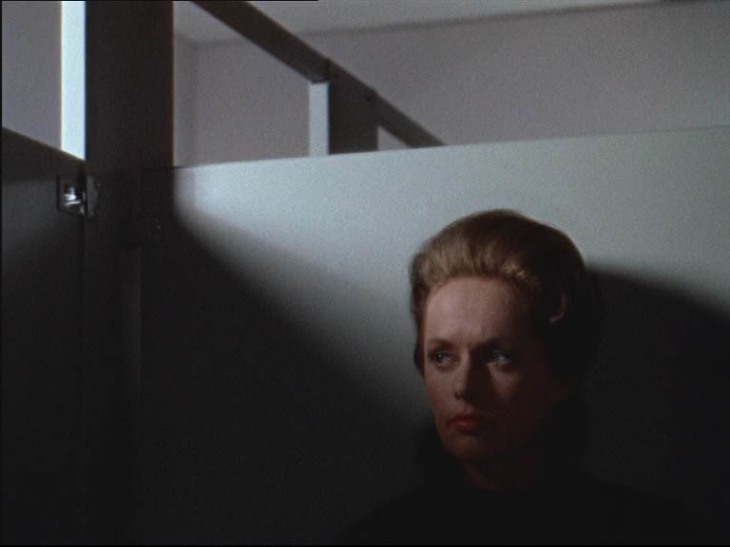 Marnie crouching in the shadows reading to burgle 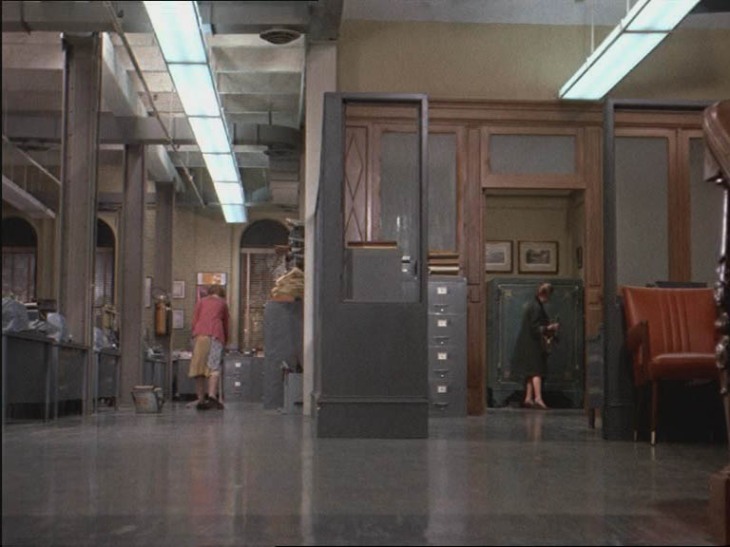 Marnie burgling. Now THIS is a shot.

Mark’s deconstruction of Marnie’s personality is what drives the narrative forward.  Each new revelation sends the plot swinging in a new direction as Jay Presson Allen’s script (based upon a book by Winston Graham) keeps pulling the carpet out from beneath the characters’ feet.  Initially, Marnie seems to be quite a clever woman in control of her life.  She lives by working a job long enough to be in a position to steal from her employers then, having carried off the heist, she lives a life of leisure until all the money is used up and she has to go back and start again.  Her frequent flipping between identities protects her from the police but it also foreshadows a degree of psychological instability.  Is the Marnie we see early in the film a cohesive identity or is it just that Marnie’s life is made out of a series of comfortable ruts, each one with an identity attached to it?   An identity that is stable only within a certain context?  When Mark marries Marnie, he is effectively taking her out of her comfort zone and forcing her into a new identity for which she has no carefully prepared template.  No longer is she the free-wheeling thief, the guiltless horse rider or the guilty daughter.  Instead she is in a relationship with someone who knows what she is like.  Indeed, once Marnie realises this, she starts to fall apart, revealing a fear of sexuality and an irrational destructive streak that leads to her attempting suicide.  Despite this set-back, Mark keeps digging.  He pays off Marnie’s old boss and investigates her background, gaining ammunition for the couple’s frequent arguments.

I think it is important to note at this point quite how weirdly compelling a character Connery’s Mark really is.  While Hitchcock structures the plot around the gradual unpacking of the Marnie character, his handling of Mark is much more elusive and teasing.  For example, we know that Mark was married before and yet he seems to have lost all interest in even talking about his ex-wife.  He has also effectively seduced his sister-in-law Lil (Diane Baker), reducing her to a cross between a sex-starved teenager and a loyal puppy who begs him for the chance to lie to the police on his behalf.  Clearly, there is something amiss with Mark.  The only emotion that he systematically displays is intellectual curiosity.  We are told that he originally wanted to be a zoologist and the film heavily implies that he sees Marnie as some kind of specimen to be examined.  But what makes Mark such a fascinating character is not merely his almost psychopathic detachment from the problems caused by his troubled wife but the combination of this detachment with his desire to keep Marnie close to him.  To possess her.  Indeed, from a modern stand-point, Mark’s tight control over Marnie’s life and psyche is undeniably abusive.  Not only does he refuse to allow Marnie the chance to retreat back into her shell, he uses psychological manipulation and even rape to force her out of her shell.  To be more honest.  To be more open.  We see him reading books with terrifyingly old-fashioned and misogynistic titles such as “Sexual Aberrations of the Female Criminal”.  The greatest unanswered question in Marnie is whether this is a pattern that Mark followed in his previous marriage.  Did he scythe his way through his ex-wife’s psyche only to leave her once he grew bored?  In effect, Mark is a male counterpart to the Basic Instinct series’ Catherine Trammell, he is an expert in fucking with people’s heads and he has no qualms about using that expertise to get what he wants.  Had the Mark character been female we would call him a femme fatale but, because he is a man, with all of the authority that comes with education, breeding, money, good-looks and professional accomplishment, we see him as a sympathetic character who is simply trying to fix a troubled woman he loves.

Even the final line of a film suggests that something is off with Mark.  When Marnie coos that “I’d rather stay with you” his response is a casual “had you, love?” and not “would you, love?”  clearly, Mark is interpreting Marnie’s contraction as “I had rather stay with you” instead of “I would rather stay with you”.  ‘I had rather’ implies a choice born of a lack of options (“I had rather do as you say”) where ‘I would’ implies an active choice (“I would do anything for you”).  It is not clear what this rather gnomic piece of dialogue means.  Is Mark suggesting that because he knows Marnie’s secrets that he has some power over her?  The film is rather coyly elusive on this matter as, beyond intellectual curiosity, it never quite reveals what Mark sees in Marnie.

Rinsing out the sin after a job.

What Mark finds once he starts digging is beautifully demonstrated by Hitchcock.  In addition to Marnie’s changing hair colour that gets lighter and less coifed as more of the truth comes out (until it is a pale blond flapping messily in the breeze), we have the flashing red reminder of Marnie’s phobia and two remarkable dream scenes reminiscent of Roman Polanski’s The Tenant (1976)) in which Marnie’s dream has her lying in a room that is made up of elements of her own bedroom and elements of the room she slept in as a child.

Marnie in her old room… 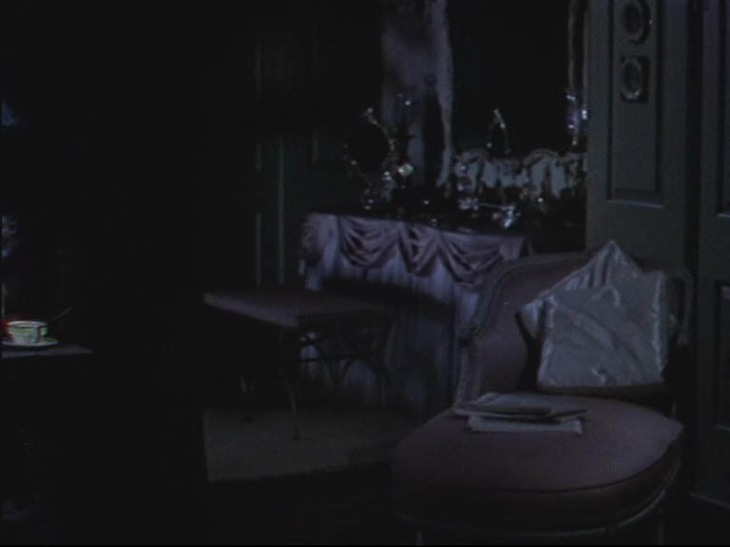 …but the dream is fading…

…fading out of the dream and…

Also remarkable is the scene in which we see Marnie’s childhood trauma.  Using some kind of strange lens, Hitchcock makes the proportions of the room shift radically as the camera moves forward.  Both effects are incredibly eerie and they perfectly capture Marnie’s disjointed and fragmented psyche.  One could even talk of these effects being expressionistic (as much as I hate the over-use of that term.

What makes Marnie such a wonderful film is the contrast between the transparency of Marnie and the opacity of Mark.  We know that Marnie is an abused child, we know that her brush with paedophilia has left her fearful of sex resulting in her sex drive re-emerging as a desire to steal money and spend it all on riding horses (once the horse dies, Marnie is no longer capable of stealing money, the cycle is broken).  We also know that she has phobias associated with an act of terrible violence that characterised her childhood.  We know so much about Marnie and yet we know nothing about the man who facilitates all of this psychological transparency.  So while Marnie is a film that openly accepts a Freudian vision of psychological disfunction, it is also a film that knows that not everyone is so easily read.