There is something faintly Proustian about sitting down at a keyboard in order to write about Japanese Horror.  As though biting into a madeleine, I am suddenly transported back to the horrible ICA seating I put up with in order to see Hideo Nakata’s Ring (1998).  I am swamped by memories of girlfriends past, trips to out of the way cinemas, sequels rented on VHS tape and vindictive reviews of terrible American remakes.  It all seems like so long ago and yet it was only the early 00s.  Tempus Fugit.  Sic Transit Gloria Mundi…

Though historically accurate, mentioning Ringu seems somehow inappropriate as,  despite having been a product of the J-Horror bubble (it even earned itself a terrible 2005 American remake), Kiyoshi Kurosawa’s Kairo is no mere genre copy-cat.  Clearly influenced by Tarkovsky’s Solaris (1972) and Stalker (1979), the film uses genre formulae as a spring-board for exploring philosophical ideas with an almost poetical elegance and softness of touch.  Kairo is, in every way, a remarkable film.

The film’s plot follows two strands.  The first involves a group of young people working for a plant company.  When the resident IT geek fails to show up for work, his colleague Michi (Kumiko Aso) expresses concern.  Despite the protestations of her co-workers that he’s doubtless fine and will turn up eventually, she travels to his flat to retrieve a disk needed at work.  Though polite, the IT geek seems preoccupied as he tells her to search through the disks on his desk.  Having retrieved the disk, Michi goes into the other room to thank her colleague but discovers that he has hanged himself with a length of computer cable.

Meanwhile, on the other side of town, an economics student named Kawashima (Haruhiko Katô) sits in his single room apartment.  All alone, he decides to try out this new internet thing he has heard about.  He plugs his computer into the phone socket, he makes his way through the registration process and suddenly he finds himself at a strange website filled with what seem to be live camera feeds from darkened and dingy single-room apartments filled with odd and depressed looking people.  “Would you like to meet a ghost?” asks the creepy website.  Kawashima, understandably freaks out and unplugs his computer.  Needless to say, it turns itself back on while he is asleep…

Note architectural awareness : In a living room with only a bed and a PC, what are you going to spend most of your time doing?

These opening scenes place us well within Ringu territory.  Clearly, there is something strange going on online and the people who encounter it wind up killing themselves.  However, this initial impression rapidly disperses as the film opens out from a standard ‘evil technology’ narrative into something much more elliptical and ambitious.

A room full of people but everyone’s avoiding eye-contact

The central idea behind Kairo is expressed by one of the essays in Schopenhauer’s Parerga and Paralipomena (1851).  In the essay, Schopenhauer argues that human intimacy poses a similar challenge to that facing groups of hedgehogs on cold nights.  On a cold night, hedgehogs require the heat that can be gained by snuggling up to other hedgehogs, but their desire for heat must forever be weighed against their desire to not be injured by the spines of the other hedgehogs.  So, a hedgehog must decide whether he wants to cope with the injuries he sustains from closeness to other hedgehogs, or he must learn to live with the cold.  Human intimacy works on similar terms.  Humans need the love, friendship and support that comes from close relationships with other people but their need for intimacy is always counterbalanced by their fear of being emotionally wounded.  As a result, many people choose to keep other people at arms’ length, preferring the cold of loneliness to the searing pain of heart-break and betrayal.

Life (and death) in solitary confinement

Kurosawa (who also wrote the film) presents Japan as this nation of singletons living in cage-like one room apartments, separated from each other by social awkwardness and apathy.  People would rather be lonely than impolite.  The film is filled with this crushing sense of social entropy.  An entropy so strong that some simply give up.  As Michi’s boss says when she tries to help another worker :

“Words said in friendship and with the best of intentions always wind up hurting your friends deeply.  And then you wind up getting hurt.  Is friendship always like this?  If that’s so, what’s left?  If I were you… who needs friends like that?”

Kurosawa presents the internet as a kind of lens for this dilemma.  It is a technology that is all about forming connections between people and things, but it can also be a source of incredibly loneliness.  Just because you have hundreds of hits on your blog and thousands of friends on facebook, it does not mean that you have a single meaningful connection with another human being.  If anything, the internet seems to be a venue for growing longer hedgehog spines, encouraging you to build low-risk and low-investment friendships with people you do not and quite possibly will never really know. 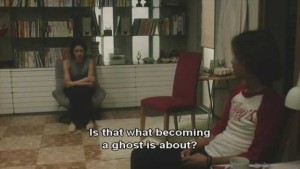 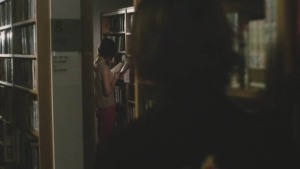 Kurosawa mkes wonderful use of foregrounding and backgrounding. His blocking and visual construction is endlessly fascinating

Against this backdrop of intense social alienation and loneliness, Kurosawa presents the forming of real friendships as an almost heroic act.  When Kawashima finds his way to the university computer lab he asks glamorous student Harue (Koyuki) for advice and the pair begin a tentative and endearingly awkward friendship punctured with long silences, foot shuffling and bad attempts at small talk.  When Harue asks to visit Kawashima’s flat in order to examine his browser history, she seems so forward that she might as well have lunged for his genitals.  When the pair actually get home, Kawashima studiously avoids Harue’s glance and starts tidying up rather than dealing with the fact that the only place he can sit down is on the futon next to her.

These themes of alienation and loneliness are also played out in the film’s rather peculiar spiritual metaphysics.  Beneath the exploration of the concept of alienation, Kairo is a Japanese ghost story in the style of Shimizu’s Ju-On (2000) or Nakata’s Dark Water (2002).  The website encountered by Kawashima essentially links up people who are lonely to the point of suicide.  If you engage with the website it tells you to visit a forbidden room.  Sealed off with red masking tape, these rooms were the places where people have committed suicide and to step into one is the encounter a ghost.  Kairo’s first visit to a forbidden room must rank as one of the most chilling cinematic experiences I have had in the last year.

The film is also beautifully lit. 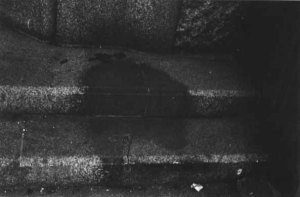 Kurosawa’s cinematic skill is total.  His encounters with ghosts are beautifully scored with a blend of cello, sampled modem noises and other-worldly voices.  But beneath the music he also shows a real awareness of the importance of sound texture to the framing of a scene.  The visits to the forbidden rooms are stripped of the white noise of everyday life.  The rustling wind, the passing cars, the pipes behind the walls and the voices of passers by.  The kinds of noises that remind you that you are not deaf or alone in the world.  It is a claustrophobic silence.  An oppressive lack of sound.  Into this silence, Kurosawa then injects an almost sub-sonic rumbling.  A brown note that sets the hairs on the back of your neck on end.  His ghosts appear out of stains on the wall… stains mistaken for human shapes like the outlines left on the walls of Hiroshima and Nagasaki.  They start to move with the same jerking angular motion as your standard J-Horror ghost but Kurosawa seems to have augmented them by swapping real images of human movement with blobs drawn directly onto the film.  The impression is wonderfully eerie.

This scene is accompanied by joyous video game music. Terrifying.

In ways that are not quite clear, the ghosts seem to be escaping the afterlife and re-entering the world of men.  These ghosts are lonely figures, glanced out of the corner of your eye and easily confused with stains on the wall and shadows in corners.  They also seem to be attracted to humans (hence the echoes of dating sites in the question “ “Would you like to meet a ghost?”) but humans are ill-equipped to deal with seeing ghosts and seeing a ghost tends to destroy them, sending them into an ugly downward spiral into madness, isolation and suicide.  However, Kurosawa blurs the line between ghosts and humans.  As more ghosts filter through into the world and more humans become ghosts, Kurosawa starts to empty out Tokyo, slowly turning it into a post-apocalyptic wasteland.  When the central characters meet up in public spaces, they are surrounded not by other people but by dim shadows.  A reminder of how it is possible to feel lonely and isolated even in a densely packed city like Tokyo.

Note the murky tone to the image. Cityscape as rotting corpse. 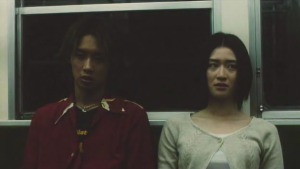 Lonely even when together.

The slow emptying of the world is a statement about how infectious social alienation can be.  Introduce one introverted and shy person into a group and the level of discussion drops.  People become self-conscious about the lack of flow to the conversation and this forces the shy person even further into their shell.  If that happens enough then the shy person will stop going out but not before they have made other people think twice about going out.  “Is such-and-such going to be there?  If so I’ll give it a miss”.  Before long real friendships and relationships start to fall apart as the isolation and loneliness feeds upon itself, spreading like a black cloud.  The only way to deal with this, Kurosawa seems to be suggesting is to confront it.  If someone is shy, make an effort, don’t worry about being rude.  To be human is to need warmth but to feel warmth is also to feel pain.  Memories of pain should never be strong enough to make us forget the warmth of human contact. 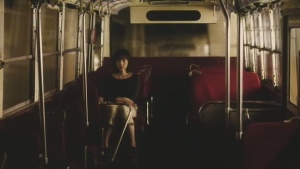 One of a couple of brilliant bus scenes. Note the strange colour of the view out the windows and the slightly odd angle… as though the bus is forever going downhill.