One thing that old Ludwig Wittgenstein got profoundly right was the suggestion that the meaning of language is fixed by use.  What this means is that words have no intrinsic meaning.  They are not defined by the characteristics of the objects to which they refer, they do not even need to correspond to actual objects in the world in order to have meaning, nor do they need to have clearly fixed boundaries in order for them to be useful.  Instead, words acquire their meaning through the social context in which they are used.  As Wittgenstein put it “If a lion could talk, we could not understand him”.  We could not understand him because we have only the faintest idea of what the inner and social life of a lion is like. 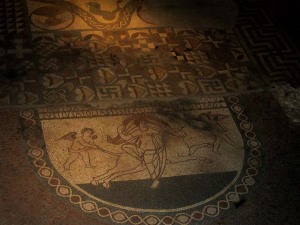 While this is true of words, it is also true of symbols.  Symbols and collections of images have no inherent meaning.  They only have the meaning that is ascribed to them by use in a certain social context.  A crude example of this is the swastika.  When it was embedded in the mosaic flooring of a Romano-British villa it had a very different meaning compared to the one it might have if it were found painted on the ceiling of a cabinet minister’s bedroom or on a gravestone in a Jewish cemetery.

The Battle of Cable Street

As social contexts evolve, so too do the meanings of words and symbols.  We can see this in the way that things are advertised.  For example, no modern Western political party (outside of Italy) would embrace militaristic patriotism to the point of dressing its membership in military uniforms and having its rank and file march through the streets in neatly ordered columns.  Where once these types of branding exercises were accepted as displays of leadership, discipline, strength and dynamism, they would now be political suicide.  The shadow of Fascism is still such that its political language and symbolism has become entirely debased.  These symbols now mean oppression, misery, brutality and tyranny.  The political opinions underlying much of Fascism are still present in the West, but nowadays they are expressed in more genteel terms : Politicians seeking to promote a muscularly expansionist foreign policy speak of ‘spreading freedom’, ‘pre-emptive strikes’ and ‘self-defence’.  Politicians hoping to raise their profile by brutalising criminals speak of ‘putting the victims first’.  Politics, much like advertising, brings a Darwinian element to the evolution of language and social context.

The bread and butter of the TV series Mad Men is the clashing of cultures between the conformist, button-down world of the 1950s and the more individualistic culture of the 1960s.  Don Draper is a character who spans both worlds and so is particularly adept at convincing companies to update their images to fit the times.  In one scene, we see him trying to convince executives from the lipstick company that they can use female empowerment as a way of selling things to women.  Submission through the illusion of consumerist manumission.  In another scene, we see him convincing people from a photographic company to trade not on the New and Space Age characteristics of their product but rather upon more backward looking potential for nostalgia present in the photos themselves and in the lives of their customers (an idea that not only encompasses the move from universal to individual values, but also the willingness of older people to look to the past in the hope of escaping on-coming social change).

Advertising brings Darwinian pressures to bear upon critical language.  This is due to the fact that, since the Renaissance, art has presented itself as primarily a counter-cultural activity and therefore an anti-commercial one.  Given this context, to praise art in commercial terms is to deny its nature as art. Because, to praise art through the values of the status quo is to deny its counter-cultural power and therefore its apparent raison d’etre.  But of course, that counter-cultural status is something that people aspire to and if people aspire to something then that thing can be used to sell other things.  The fundamental myth underlying consumerism is that purchasing decisions have transformative characteristics.  Consumerism is fetishistic and superstitious, it relies upon an inversion of cause and effect : People are cool and therefore they buy X, if you buy X you are therefore cool.

While walking down Oxford Street the other day, I came across an astonishing reminder of the desire by advertising to co-opt not only the symbols but also the language of the counter-cultural and the anti-commercial.  I will not call this company by its name or link directly to it as I am sure that they vanity search compulsively and would see this kind of examination of their PR guff as validation but their website is here.

The company’s slogan and imagery invokes memories of the Sex Pistols and they present themselves as an almost revolutionary artistic movement.  “Hopelessly foul-mouthed, anti-establishment and politically incorrect”.  “A bit like socialism, only funnier, more addictive and tastes better”.  They have “dates” like a rock band and they describe their product as subversive.  Fifty years ago, being subversive would have resulted in you being interrogated by Special Branch.  Now it is a way of describing frozen pudding.

The co-opting of this kind of language by such crassly commercial concerns suggests the need for a new iconography and lexicon for artistic dissent.  Terms such as, for example “difficult”, “uncomfortable”, “disconcerting” and “offensive”.  Words which, at least in the current climate, could not reasonably be attached to a product that anyone might want to buy.  The power of advertising is such that the critical language of art must be constantly evolving in order to stay ahead of the curve.  To stand still is to be co-opted.  To be co-opted is to stop making art.