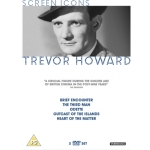 FilmJuice have my review of a recently released collection of films starring the late great Trevor Howard.

The collection includes David Lean’s Brief Encounter, Herbert Wilcox’s Odette, George More O’Ferrall’s Heart of the Matter and a Carol Reed double-bill comprising The Third Man and Outcast of the Islands. While it is somewhat unfortunate that the collection doesn’t include Sons and Lovers (the film that netted Howard his only Oscar nomination), I feel that the films included here do an excellent job of showcasing precisely why it was that the odd-looking Howard rose to prominence as a leading man in post-War British cinema. The answer, in a word, is fallibility:

Instantly recognisable to anyone who grew up in the days when terrestrial TV channels still padded out their schedule with classic black and white films, Trevor Howard is one of the great screen presences of British post-War cinema. No matinee idol, Howard’s awkward looks and brittle manner made him the perfect choice for directors seeking a wounded British patriarch; a man of action who is forever tired, a romantic figure with just a hint of threat, a spy who gives away all his secrets and listens to no one. In fact, Howard was so effective in these sorts of roles that the end of his career saw him typecast as an impotent and dysfunctional authority figure: a symbol of broken imperial hubris to be mocked in Superman and denounced in Gandhi.

Howard is, in many ways, the antithesis to the unflappable patriarch played by Noel Coward in In Which We Serve, a fragile and selfish man who tries to assume the role expected of him by his society only to fail and fail again. Interestingly, Howard’s film career was boosted by his reputation for being something of a war hero who did ‘good work’ in the royal corps of signals during the Second World War. However, as Terence Pettigrew revealed Trevor Howard: A Personal Biography, Howard was actually kicked out of the army for having a “psychopathic personality”. I can think of no more fitting a life story for a man who would spend his career playing flawed patriarchs.

In terms of the films included in the collection, Brief Encounter, Odette and The Third Man are unimpeachable classics of post-War British cinema which more than justify picking up the collection. However, the other two films are somewhat less than brilliant.  I bounced quite hard off the hysterical racism of Outcast of the Islands but warmed to the odd narrative structures and atmospheric cinematography of O’Ferrall’s Heart of the Matter. However, I can completely understand people having the opposite reaction as in the case of Viv Wilby’s excellent write-up of the collection over at Mostly Film:

In his New Biographical Dictionary of Film, the critic David Thomson blames Trevor Howard’s second-league career on bad role choices and a reluctance to move to Hollywood. Maybe. Or maybe he was hidebound by a British film industry that struggled to see him in anything other than upper-middle class officer roles. Or perhaps he was just born too early. Were he in his prime in the 60s rather than the early 50s perhaps he would have had more interesting choices to make. One of his favourite roles was apparently the eccentric aristocrat in Vivian Stanshall’s 1980 film Sir Henry at Rawlinson End. That would have been a more interesting addition to a Trevor Howard boxset than, say. Odette. But even in this rather narrow selection of movies, Howard shows himself to be an actor of great versatility and sensitivity and there’s much to admire and enjoy.

While I can see the case for excluding Odette, I think it would be foolish to do so. Odette casts Howard as a deluded and privileged foil to Anna Neagle’s quietly heroic female spy who undergoes terrible hardship without breaking whilst Howard’s character enjoys a much softer treatment by virtue of his family connections to Churchill. Aside from being the originator of the immortal “we have ways of making you talk” line and the inspiration for the way that Allo Allo handled British people speaking in different languages by varying their accents, Odette can actually be classed as a feminist film. At a time when most big releases struggle to pass the Bechdel test, it is hard to imagine a lavishly produced studio picture about the quiet heroism of a middle-aged woman.