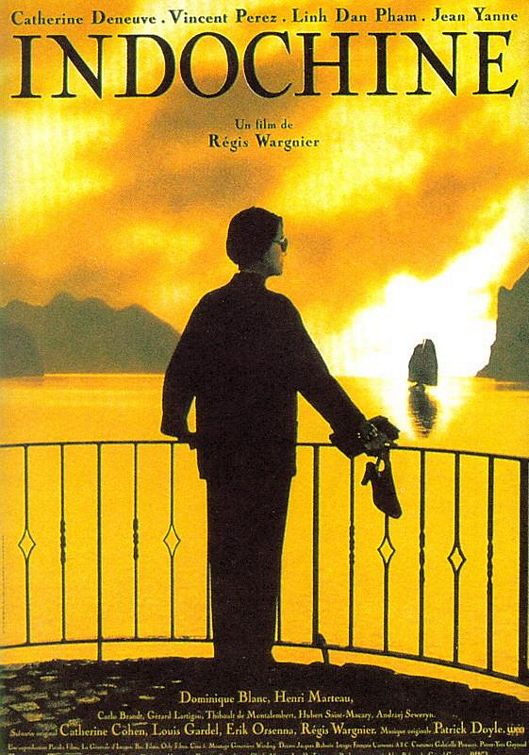 My first review of the year is of a film that is as intriguing as it is flawed and problematic. First released in 1992,  Regis Wargnier’s Indochine can only be described as a piece of post-colonial Oscar-bait.

The “post-colonial” bit refers to the fact that Wargnier’s film followed the example set by David Lean’s A Passage to India and used France’s colonial history as an excuse to make a beautiful and nostalgic film about an exotic foreign land. Wargnier’s producers knew full well that nostalgic prestige productions tend to do disproportionately well at the Oscars and so Indochine was always a cynical exercise in bringing home the gold. Hence the term “post-colonial Oscarbait”.

However, while the idea of white people from former colonial powers making films about former colonies is always going to be problematic, I think that Indochine deserve some credit for not only siding with the oppressed but also presenting colonialism as a system that was both monstrous and politically unsustainable. My FilmJuice piece about the film can be found here:

Indochine is a beautifully made and well-performed film that handles a difficult subject in both a progressive and sympathetic manner. However, while the film’s production values and ambitions may scream quality, there is no escaping the fact that this was a film about colonialism made by white people for the consumption of other white people. The writers and director do try their best to get beyond this limitation but the decision to use the Vietnamese characters thematically rather than narratively means that the film retains a cool, detached, and ultimately frustrating viewpoint that denies its subjects agency when it should be seeking to understand their actions.

Re-reading my review, it strikes me that Indochine exemplifies many of the problems presented by cultural appropriation. Though many of the film’s narrative problems do stem from a decision to focus on the white characters rather than the Vietnamese characters, having a bunch of French people tell a story about Vietnamese people struggling to defeat French colonialism would arguably have been just as bad.

Best known as the director responsible for such safe, middle brow, award-bothering prestige productions such as Mrs Brown (1997), Shakespeare in Love (1998) and Captain Correlli’s Mandolin (2001), John Madden returns with a thriller written by Jane Goldman and Matthew Vaughn. As might be expected from the writing team behind X-Men: First Class (2011) and Kick-Ass (2010), The Debt is a kinetic thriller that is forever promising to erupt into something a good deal more complex. However, much like both Kick-Ass and First Class, The Debt is a film that works best when it is in movement as its quiet character moments are under-written and under-powered despite some decent performances by two eye-catching casts.

Split between two timelines, The Debt tells the story of a group of 1960s Mossad agents who are sent into Soviet-controlled East Germany to kidnap a Nazi war criminal. Forced to live together, the three agents quickly stumble into a love triangle that finds the quietly intense Rachel (Jessica Chastain) having to choose between the introverted idealist David (Sam Worthington) and the arrogantly ambitious Stephan (Marton Csokas). When the kidnapping goes wrong, the three young people find themselves having to babysit an aging but fiercely intelligent Nazi who relentless probes their weaknesses and tries to set them against each other. Bookending this middle section is the film’s second timeline. Set in the 1990s, this timeframe explores the psychological consequences of the events of the film’s middle section. Still physically and psychologically scarred by her ordeal, Older Rachel (Helen Mirren) shifts uncomfortably as her daughter pays public tribute to her heroism. Meanwhile, Older David (Ciaran Hinds) is crippled by the burden of guilt and secrecy while Older Stephan’s (Tom Wilkinson) arrogant bluster has turned into tyrannical will-to-power.

The Debt features some excellent action direction and powerful sound-design that lends its fight sequences a brutal clarity that is terrifying when compared to expanses of quiet emotional desolation that dominate the rest of the film.  The scenes in which a manipulative Nazi confronts the agents are similarly impressive even though Quentin Tarantino did the same thing only better in Inglorious Basterds (2009).  Unfortunately, once the film moves beyond such genre staples, the limits to both the script and Madden’s direction start to become painfully evident.

Much of the film’s drama rests upon the tension of the plot colliding with both the characters’ back-stories and the bonds of affection that tie them together. While this occasionally works quite well (in particular the scene where Stephan seduces Rachel at the piano while the introverted David flinches in pain with every note they play), the film does not manage to pull off the bulk of its dramatic moves and because many of the film’s emotional beats fall short of the mark, many of the film’s sequences seem overly long and hopelessly flabby. Indeed, there were huge expanses of this film where time seemed to stand still as characters pouted and bemoaned some inner turmoil that never managed to feel real let alone seem particularly compelling.

The problem is that while The Debt had the potential to be an interesting genre film, the filmmakers clearly want it to be quite a bit more. Having secured a good deal of top-notch acting talent, you can sense their desire to make the most of it and maybe push for a few awards but, at the end of the day, both the script and the direction of The Debt fail to support these lofty ambitions and so a promising espionage thriller finds itself transformed into an over-long and dramatically dysfunctional exercise in thespian posturing. This film has nothing much to say about the human condition and its insistence on trying to say it for close to two hours is both depressingly and frustratingly tedious.

As my review suggests, this is an entirely decent piece of filmmaking.  The story is a fundamentally interesting one, the direction is competent, the performances are entrancing and the whole thing looks and feels very much like an episode of The West Wing featuring some of the best thought-of actors in modern-day Hollywood. The problem is that, while The Ides of March is entirely decent, it is not particular exciting. Indeed, when I say that it looks and feels like an episode of The West Wing, I mean exactly that and while I liked The West Wing quite a bit at the time, I do think that a serious political film has to do a little bit more than ape a decade-old TV programme:

Whether on a visual or narrative level, Clooney and co-screenwriter Grant Heslov really do not show us anything that we have not seen before. The tale of idealism crushed beneath the boots of political expediency is an old political saw and while the themes of fear and loyalty are interesting, Clooney’s direction fails to elevate them above the level of a subtle motif. Perhaps if Clooney had been less plodding in his direction and the film’s accusation had been more concrete and impassioned then Ides of March might have been a truly memorable piece of political filmmaking. Instead, Clooney’s latest is nothing more than an entertaining and competently directed romp featuring great performances from some of Hollywood’s most potent (and promising) acting talents.  Some Friday nights, that is more than enough.

I didn’t dislike the film and I would warmly recommend it to West Wing fans but no film this derivative should have this amount of buzz surrounding it.  That’s all I’m saying…

While there is no doubting that the film has its moments and that many of these moments involve incredibly well observed and subtly performed recreations of humans going through the grieving process, Rabbit Hole strikes me as one of a growing number of films that seem less concerned with their subject matter and more concerned with winning awards for their actors.  I call this evolving sub-genre Oscar Bait:

Films such as Stephen Daldry’s The Reader (2008), John Patrick Shanley’s Doubt (2008), Bennett Miller’s Capote (2005) and Tom Hooper’s The King’s Speech (2010) tell very different stories about very different characters and explore very different sets of issues but they also share certain clear similarities.  For example, while all of these films touch upon quite substantial themes and ideas such as religious doubt, the role of the monarchy, involvement in the Holocaust and the media’s enabling relationship with criminals, none of the films really have anything to say about any of these topics. Indeed, while Rabbit Hole is about a couple experiencing grief over the loss of a child, Lindsay-Abaire’s script does not contain anything that is new or surprising. In fact, the plot of Rabbit Hole could be summarised as ‘unhappy people are unhappy’. However, while Rabbit Hole does not genuinely engage with human grief in any meaningful way, the fact that it alludes to these sorts of issues is sufficient for critics and audiences alike to consider it a ‘serious film’ that is worth a) going to see and b) taking seriously. Having convinced us to take them seriously, Oscar Baits then immerse us in a world full of acting-based set pieces.