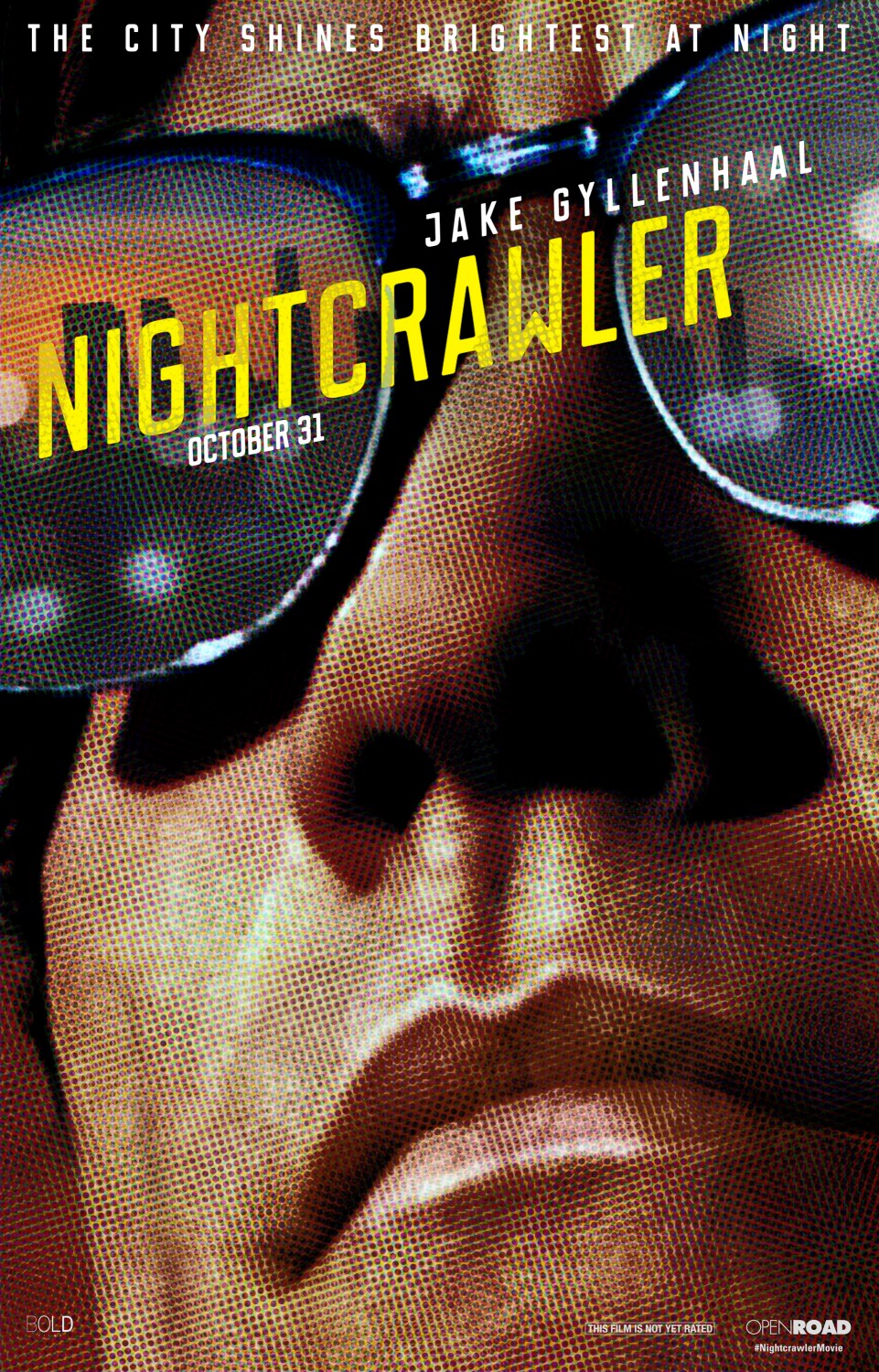 I am still not entirely clear how Nightcrawler managed to get seen, let alone made… Yes, it had a relatively slim $8.5 Million budget and yes, it appears to have received some money from a Californian tax credit scheme but how did a viciously left-wing film about a profoundly unsympathetic character manage to pick its way through the gears of a Hollywood machine that has grown disinterested in anything other than Summer money and Winter respectability? This film neither provides multinational corporations with a means of advertising to children nor aging sex symbols a chance to relaunch their careers by playing someone ugly, disabled, or mad.

I can imagine this film being made by Fritz Lang in the 1940s or Martin Scorsese in the 1970s but from a first time writer/director in the same year that the Academy nominated American Sniper for Best Picture? No. Not now. Never.

Nightcrawler is a film that is completely out of step with the cowardice, mendacity and incompetence of contemporary Hollywood. It is the cinematic equivalent of a black panther spotted diving into an English hedgerow or an enormous footprint discovered in the forests of the Pacific Northwest. It is a cryptid, evidence of a cinematic Golden Age that exists nowhere other than our desire for something bigger, better and different to what we actually have.

Described as a “neo-noir crime thriller”, Nightcrawler is best understood as a film that critiques American cultural values in a way that echoes the visual panache of Nicolas Winding-Refn’s Drive albeit with none of that film’s faith in the retributive powers of heteronormative masculinity.

END_OF_DOCUMENT_TOKEN_TO_BE_REPLACED

1. Langley, we have a problem…

Last week I went to see Mission Impossible: Ghost Protocol, Brad Bird’s well-received addition to the decidedly uneven Mission Impossible franchise. While my opinion of the film is that it is really nothing more than a competently made action film, the film’s central plot conceit is absolutely fascinating for what it says about how we perceive the workings of government.  Take a look at the trailer and you will see what I mean.

END_OF_DOCUMENT_TOKEN_TO_BE_REPLACED

We are the products of the long, drawn-out process known as evolution by means of natural selection. Regardless of whether or not you buy into the memes and methods of evolutionary psychology, there is no point in denying that we stand forever on the cusp of the future, shaped by the depths of the past. One troublesome product of our evolutionary history is the desire to see the world as a binary opposition between the goodies and the baddies. From an evolutionary standpoint, this kind of reductionism makes perfect sense as our lives once depended upon the capacity to instantly distinguish between friend and foe.

As educated adults, we know that such reductions are simplistic fantasies. We know that the real colour of the world is not black or white but an ugly beige, a vast moral greyness tainted by the blood red of guilt and atrocity. We know these things and yet we still hanker after certainty and when our mind cannot find certainty in the world, it cuts corners by blinding us to the moral shortcomings of our allies and the unexpected nobility of our opponents. The world is a complex place and we can only make sense of it by choosing a line of best fit and sticking to it come what may.

END_OF_DOCUMENT_TOKEN_TO_BE_REPLACED

NB: Thoughts On… is new strand for this particular blog.  As I have been watching quite a few films recently, I have realised that while many films give me reason to ponder, not all pondering necessarily results in either a coherent opinion or enough substance for a full critical response.  So instead of keeping such thought to myself, I have decided to share my thoughts on the various films I see as well as producing more developed pieces.

Currently on limited US release and in search of US distributors, Andrew Rossi’s Page One: Inside the New York Times primary concern is with the current economic state of the US newspaper industry and it asks whether there is still a place for an old media institution like the NYT.  Indeed, with advertising revenue drying up, classified ads moving online and more and more people getting their news online for free, the question of the Times’ continued existence needs to be asked if only so that we can work out why it is that newspapers should survive.  While Page One offers us an answer, I am not at all convinced that the answer it gives us is all that convincing.

Our guide through the issues surrounding the future of the newspaper industry is the NYT’s engaging media columnist David Carr.  The doc follows Carr about as he breaks stories, interviews new media tycoons, takes part in panel discussions and gives speeches at journalism conferences. A gruff scarecrow of a man whose odd physicality speaks to his past as a drug addict, Carr is absolutely savage in his defence of the New York Times in particular and print media in general.  In fact, Carr is so engaging a presence that it is difficult not to smile as he repeatedly swings a carefully sharpened and immaculately weighted hatchet at the reams of hyperbole generated by online mavens only too eager to dance on the grave of traditional print media. However, as engaging as Carr might be, I could not help but feel that Page One is only giving us half the story.

The problem is that Page One is a film that is utterly in love with its subject matter.  Rossi repeatedly stresses not only the NYT’s history but also its continuing role as a purveyor of truth and a guardian of natural justice.  Rather than giving equal time and equal weighting to both sides of the debate, the film portrays critics of old media as hyperbole-slinging crooks and straw men who take to the field of debate solely to provide the ferocious Carr with target practice.  So one-sided is the battle that one cannot help but begin to wonder why it is that Carr spends all his time grappling with paper tigers when the real beasts of the jungle are allowed to go about their business unmolested.  For example, in his book Flat Earth News (2008), Nick Davies points out that only 12% of the stories published in British newspapers come from actual reporters while 88% come either from recycling other papers’ stories or from cutting-and-pasting directly from press releases put out by pressure groups and business people. Once you realise that that 12% also includes stories generated through tabloid muckraking, the arguments put forward by Carr and his ilk begin to seem quite flimsy.  Indeed, there is no denying that newspapers such as the New York Times do fantastic work in breaking important stories and unveiling hidden truths, but what of the remaining 88% of the stories that grace their website?

The question of whether newspapers are a public good that are worth protecting even as their business models crumble is an important one not only for the state of our public discourse but also for the future of democracy.  By failing to answer any of the tough questions that can be asked of old media, Page One has not so much argued the NYT’s corner as sung its praises in the form of a funeral dirge.  Nobody benefits from this sort of one-sided cheerleading, least of all an industry in dire need of waking up and smelling the coffee.

Page One is arguably at its best when it is not trying to help as its most cogent and powerful arguments for the continued existence of print media are not the ones that it explicitly makes but the ones that it makes by implication simply by showing the NYT’s journalists at work.  In one brilliant sequence, the media editor and the foreign affairs editor discuss whether or not to report on a so-called ‘final patrol’ by US combat troops in Iraq only for the pair to reach the conclusion that the only people who are actually announcing the withdrawal of combat troops are the TV journalists that feature in the report and, because NBC are not actually at war in the Middle East, the story has more to do with TV reporters wanting narrative closure than it does with any real-world events of changes in policy.  As the various editors toss ideas back and forth, it is easy to see quite how much thought goes into the honing of an editorial stance.  These sequences suggest that there is far more to reporting than dumping a load of diplomatic correspondence on a website and the fact that the construction of editorial stances involve such careful deliberation and expertise is a powerful argument for the continued existence of what Clay Shirky refers to in the film as a professional media class.

The irony of Page One is that, had Rossi followed his own advice and left reportage to the reporters, this documentary would have been far more powerful an argument in favour of print media.  However, instead of allowing the NYT’s reporters to speak for themselves through their entirely admirable actions, Rossi attempts to fashion a narrative and, in so doing, weakens his own case by producing a documentary, which, though undeniably enjoyable, feels stilted to the point of hagiography.