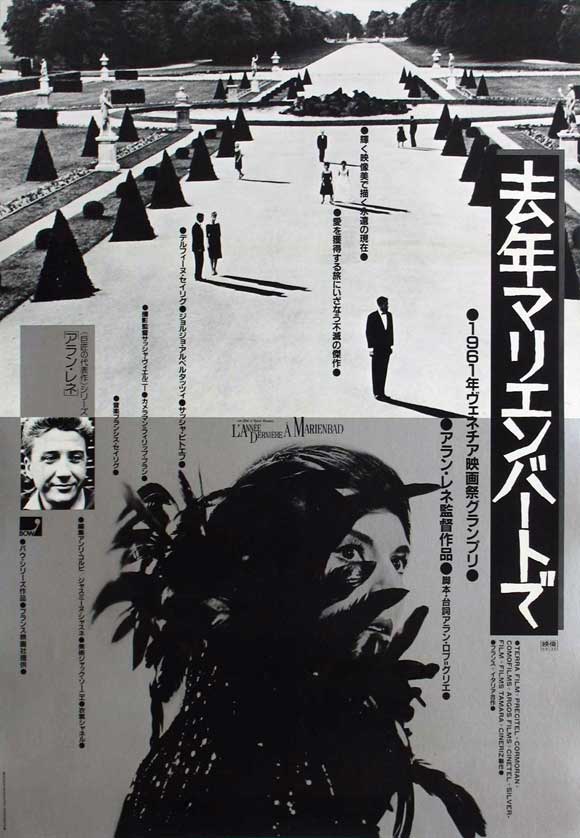 As I remarked in the introduction to my recent piece about Hiroshima Mon Amour, Last Year at Marienbad is one of a handful of works comprising the peak of the sensibility or movement known as European art house film. Great works may have followed in its wake, some may even continue to be made, but few films have managed to equal (let alone outstrip) Marienbad when it comes to sheer inventive panache. This was a film that did not so much bend the rules of cinematic story-telling as shatter them into a thousand beautiful pieces.

There are many critical paths into Marienbad, but the one I would like to focus on today involves the colliding sensibilities of the film’s writer and director:

The film’s director – Alain Resnais – may have begun his cinematic career as an actor but his reputation was built on the back of a documentary exploring the extent of France’s collaboration with the German war machine during World War II. Night and Fog served to confront the myth that the French people had spent the entirety of World War II actively resisting the German occupation. Far from spending their evenings blowing up ammunition dumps, many French people welcomed German occupation and their welcome even extended as far as helping the Nazis to exterminate France’s Jewish population. The myth of the citizen-resistance fighter was not only put about by French political elites eager to evade answering questions about their own wartime activities, it was also embraced by a French population wracked by feelings of guilt and shame. While themes of remembrance and forgetting may have gone on to dominate the rest of Resnais’ cinematic career, that career began with an examination of how memories can be manipulated by those with a vested interest in particular truths.

The film’s writer – Alain Robbe-Grillet – differed from most writers in so far as he trained as an agronomist with a particular interest in diseases of the banana. As someone whose perhaps more scientific than humanistic, Robbe-Grillet’s writing was famously devoid of humanity. Even when his work did feature conventional characters and narratives, the prose would invariably be affectless and profoundly wedded to the surface of objects. For example, consider the opening to his classic experimental short story “The Secret Room”:

The first thing to be seen is a red stain, of a deep, dark, shiny red, with almost black shadows. It is in the form of an irregular rosette, sharply outlined, extending in several directions in wide outflows of unequal length, dividing and dwindling afterward into single sinuous streaks. The whole stands out against a smooth, pale surface, round in shape, at once dull and pearly, a hemisphere joined by gentle curves to an expanse of the same pale color—white darkened by the shadowy quality of the place: a dungeon, a sunken room, or a cathedral—glowing with a diffused brilliance in the semidarkness.

There are two further things to say about this quotation: The first is that, despite appearing to be written in an objective or photo-realistic style, neither the room nor its contents ever existed. The room is a complete fiction that has been introduced into your head by the simple act of reading the above passage. The second thing to say about this quotation is that the red stain is blood dripping from the breast of a woman who has been murdered. Indeed, while Robbe-Grillet never killed or maimed anyone, his fantasy life is said to have revolved around the torture of young women. These fantasies would often inspire real actions undertaken as part of a long-term sadomasochistic relationship with another consenting adult. I mention this not to posthumously kink-shame Robbe-Grillet, but rather to position him as someone who would have been quite comfortable distinguishing between non-consensual sex and the performance of non-consent as part of an activity to which everyone involved would have willingly consented.

Last Year at Marienbad is a film about memory but also about consent and the extent to which our memories and actions can be shaped by other people.

END_OF_DOCUMENT_TOKEN_TO_BE_REPLACED

FilmJuice have my review of Alain Resnais’ iconic art house drama Hiroshima Mon Amour. Historical distance tends to result in cultural moments losing a lot of their nuance. For example, when we look back at British punk, we often struggle to see beyond the Sex Pistols and even when we do manage to escape the event horizon of their fame, we tend to only see bands like Crass and X-Ray Spex. I have a theory that when the books are closed on post-War European cinema and its contemporary art house rump, people will agree that the cultural moment peaked with Hiroshima Mon Amour, Last Year at Marienbad and L’Avventura. Sure… great films came before and after (I’ve reviewed quite a few of them) but even fifty years later, European art house film struggles to be anywhere near as beautiful, shocking, and thought-provoking as those three films. Indeed, one of my recurring moans is that many of the directors working in contemporary European art house film are little more than tribute acts grinding through gestures and ideas introduced over half a century ago.

And yet, who can blame generations of film school graduates when those gestures and ideas contain so much power?

Hiroshima Mon Amour was Resnais’ first feature-length film and the road to directing narrative features was paved with short, confrontational documentaries including Night and Fog, his damning examination of French involvement in the Holocaust. As might be expected of a feted documentarian, Resnais’ first feature begins with a series of documentary gestures in which a woman describes visiting a museum about the bombing of Hiroshima while her Japanese lover repeatedly asserts that she saw nothing at Hiroshima. The steel in his voice and the intimation of trauma it suggests set the tone for a film about memory, emotion, and the urgent need to forget:

Were someone to make Hiroshima Mon Amour today, people would say that it was a film about trauma; the trauma inflicted upon the Japanese people by the American use of nuclear weapons and the trauma of being used as a scapegoat for the years your home town lived happily under German rule. Rather than differentiating between the wartime experiences of winners and losers, soldiers and civilians, Renais links the experiences of a Japanese soldier to the experiences of a French teenager and explores the effects of trauma upon memory and, by extension, the self. Though Renais would likely not have thought of his film in terms of modern ideas about psychological trauma, he intuitively understands the ways in which trauma can distance you from people who do not share your experiences. He also understands how traumatic events can demand a form of active and self-protective forgetfulness whereby the traumatised create new stories to tell about themselves. For example, the architect is only able to function because he chooses not to talk about the destruction of his home and family. When his lover tries to start a conversation about Hiroshima, his only response is to shut her down… “You saw nothing of Hiroshima”. Conversely, the actress is only able to function because she chooses not to fall in love so deeply as to be transported back to that day when she was shaved and thrown into a basement. She recognises the need to confront these feelings and move on with her life and yet she cannot… “You destroy me. You’re so good for me”.

I’ve long suspected that my tastes are turning more and more towards the abstract. I’ve spent so long thinking about books and films that I genuinely struggle with the carefully curated experiences offered by works with strong narratives and the need to lock audiences into a single unambiguous narrative. All too often, these works feel like theme park rides only without the excitement. Like many films influenced by the experimentalism of French modernism, Hiroshima Mon Amour turns its nose up at the tricks and traps of western story-telling and encourages us to think by providing us with a stream of unanswered questions and evocative images. Hiroshima Mon Amour is one of those films that perfectly suits my current needs and tastes… it is my bag, baby.