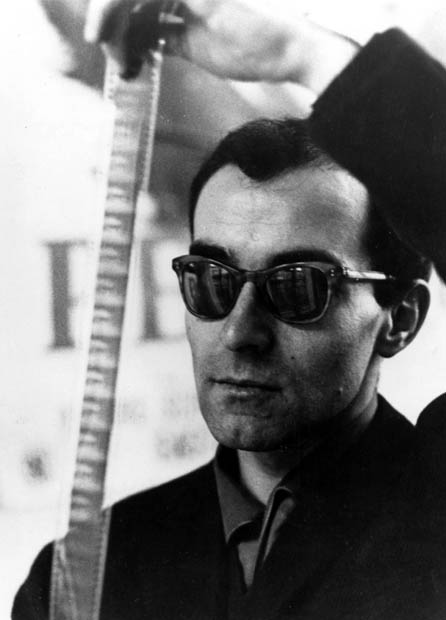 Earlier this year, Studiocanal began re-releasing the early films of the iconic art house director Jean-Luc Godard. Freshly restored and re-mastered, these re-releases not only kicked off a major restrospective of Godard’s work at London’s BFI but also began what would appear to be a rolling programme of high-definition home releases. FilmJuice have my extended review of the box set that began this programme of home releases, a beautifully-formed gem entitled Godard: The Essential Collection and includes:

While I would question the description of these five films as “essential” (there’s no Bande a Part for starters), this box set does provide an excellent starting point for anyone who would like to get to grips with Godard’s early work. If I had to provide you with something to bear in mind when watching Godard or reading my review it would be this observation:

Godard’s films speak of politics, modernity and the creation of cinematic art but they mostly speak of women and Godard’s failure to understand them.

On A Bout de Souffle…

While much has been made of the jump-cuts, non-sequiturs, and fourth-wall breaches that comprise the film’s style, none of these flourishes are anything less than organic. Just as Roman Polanski’s Repulsion would later chronicle the squalid living conditions faced by a generation of young women who had chosen to live and work outside of the parental home, Godard’s Breathless tries to capture what it felt like to be young and unsupported in 1950s Paris. It’s not just that Michel is forever failing to track down his friends or that people seem to drift in and out of bed without having a clear idea as to how they feel about each other, it’s that time expands and contracts around working days that never seem to disentangle themselves from coffee and flirting. O Lord the flirting.

Godard’s playful sound design continues once Angela arrives at work. We see her talking to colleagues, getting into costume and wandering around backstage at the strip club but the music and scoring never seem to line up with the images we see on screen. We see an old man playing an organ but we only hear the music when the shot cuts away and we’re trying to make out what the characters are saying to each other. After a few minutes of this trickery, Angela takes to the stage but the music drops out the minute she starts to sing. This results in an uncomfortable few minutes of poor singing as the camera swoops majestically around a sleazy strip joint full of men in dirty overcoats while beautiful Angela sings about being a woman. Angela’s song is entirely appropriate to a strip club as she sings neither of love nor of yearning but her own beauty and how she always says “Yes” because it doesn’t pay to be impolite with boys. This song combined with the absent score and the rough singing creates a tension between fantasy and reality: Angela’s work demands that she objectify herself but the fantasy is too imperfect to hold our attention… we cannot help but look beyond the beautiful woman to the cleverness of the sound editing or the movement of the camera.

In Contempt, art is not something that exists separately from the private lives of people who create it. Artists breathe in reality, mix with their innermost thoughts, and exhale creations new. Left to his own devices, Michel might have been able to work out the sources of Camille’s anger but his need to manage this problem whilst dealing with the Lang/Prokosch impasse distorts and obscures his vision, he cannot see beyond the limits of his art and this has served to disconnect him from reality in much the same way as the characters in Breathless and A Woman is a Woman seeks refuge in old films when they know full well that reality is more complex. During their arguments, Camille urges Michel to ignore her complaints and take the job but Michel doesn’t know if he wants to be an ambitious, money-driven person and so he blames his own lack of decisiveness on his wife. There is literally nothing that Camille could have said to make Michel happy and therein lies the rub. The film concludes with some jaw-dropping footage of the isle of Capri where Michel tries to resign from the job and make a stand for artistic freedom but his words are hollow and insincere. He can’t even convince himself.

Alphaville may be a commentary on Godard’s Paris and the way that making your way in any big city requires you to adapt your expectations to that which the city is willing to provide, but it is also a far broader metaphorical representation of the ways in which political systems break, remake, and exclude those of us who fail to fit in. Living within Alphaville means accepting the logic of Alpha 60’s plans and accepting this logic means lowering your expectations to the point where they are already met, thereby ensuring that the residents of Alphaville can live as seductresses and gun-thugs without ever feeling a moment’s sadness or regret. Caution’s mission is to destroy Alpha 60 and so save those who are still capable of crying.

Despite its sun-drenched setting and musical interludes, Pierrot le Fou is easily the darkest film contained in this box set. Apparently, when Godard’s sister was shown the film, she became agitated as she saw in Ferdinand’s suicidal blockage an echo of Godard’s own problems understanding both his art and the women in his life. This reading of the film is compelling as Ferdinand’s decision to abandon a bourgeois existence and live on the margins of society in the hopes of writing a great novel recall not only Godard’s frustrations with artistic expression but also his decision to strike out and create a new cinematic vocabulary with this very film. Like his creator, Ferdinand moves from energetic set-piece to energetic set-piece only to realise that originality and energy are no guarantee of truth. The film ends with Ferdinand strapping a load of dynamite to his own head and blowing himself up and it is difficult to think of a more apt response to a film that spends nearly two hours producing more light than heat. Pierrot le Fou is tedious and hollow but the film’s self-awareness transforms tedium into tragedy.