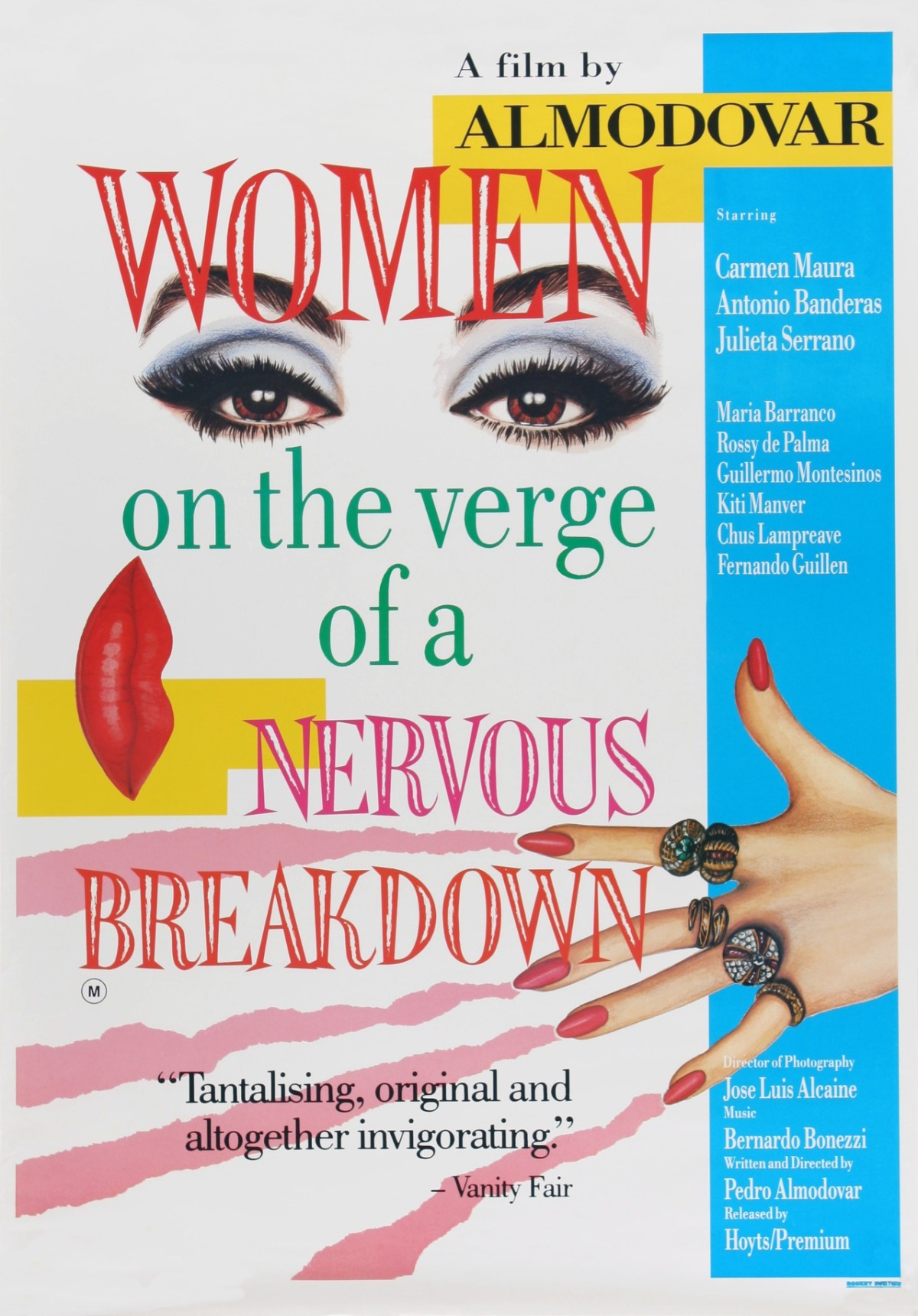 My fourth review from the recently released Almodovar Collection!  Having adored What Have I Done to Deserve This? and been thoroughly unimpressed by Law of Desire, I find myself charmed by Almodovar’s greatest success; the gorgeous melodramatic farce Women on the Verge of a Nervous Breakdown, my review of which can be found at FilmJuice over here.

British people retain a fading racial memory of the art house films that Channel 4 used to broadcast before it went into the business of bashing marginalised groups. French people, on the other hand, retain similar memories of the days when French TV would broadcast live performances of new plays. I’m too young to remember what any of these plays were about but I do remember a lot of romantic misunderstandings and a lot of slamming doors. The reason for these memories is that French theatre and comedy retain a long-standing commitment to the aesthetics of the farce.

The discourse surrounding British comedy places most works on a graph mapping movements from light to dark and realistic to stylised. For example, The Office is realistic and moderately dark while The IT Crowd is stylised and light-hearted and Dad’s Army is realistic but light. As is often the case in Anglo-Saxon cultures, the darker and more realistic your stylings, the more seriously you are taken…

Continental comedy seldom travels to Britain as it can come across as overly broad. The reason for this is that, unlike British comedy, continental comedy traditions have steadfastly refused to get sucked into the same grimdark aesthetic hierarchy as the Anglo-Saxons. On the continent, people realise that a good French farce can be just as high-minded and socially aware as a bitter sweet BBC comedy-drama dealing with depression (and possibly starring Martin Clunes). I mention this as Women on the Verge of a Nervous Breakdown is a superb example of an intelligent European comedy in that it says really interesting things about the emotional lives of women but reflects these ideas through a maze of silly sight gags and knob jokes.

“As was already obvious in Law of Desire, Almodóvar’s women are complex and paradoxical creatures while his men are nothing but objects of desire that illicit feelings more complex than they could ever hope to experience for themselves.” 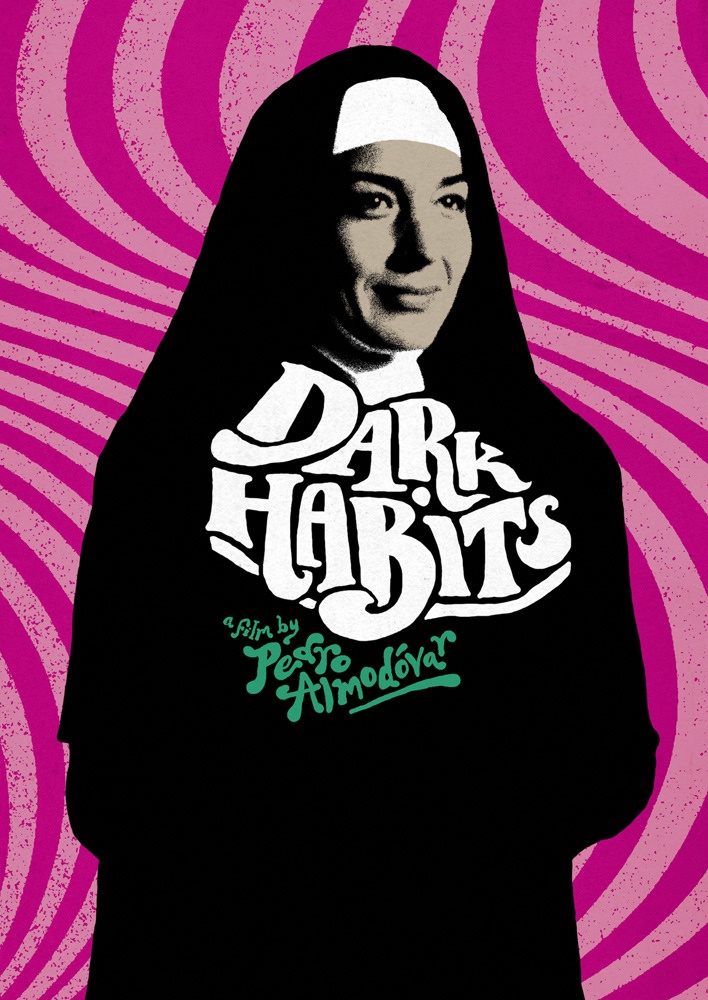 A few weeks ago, I was offered a chance to take a look at a newly-released box set of remastered films by Pedro Almodovar and despite having nothing much else to write about at the moment, I hesitated.

I think that my hesitation was born of a historic inability to parse Almodovar’s sense of humour. Indeed, despite enjoying many films whose themes and images are reminiscent of Almodovar’s work, I have always struggled with his tendency to make light of his own subject matter. In hindsight, I wonder whether this blockage might not have been due to the fact that when straight guys make light of melodramatic women and camp gay men, the mockery comes from a very different place to when the laughs are created by members of those groups. As a result, I would see the transgressive jokes about sex and death, be reminded of the 1990s and feel that the entire scene was rather tired and unpleasant. The thrills of transgressive imagery can only last so long. For an example of this jaded world-weariness that is actually a form of emotional constriction, look no further than this review I wrote all the way back in 2007. I’d like to say that I outgrew this lack of sensitivity but this review from 2013 suggests a similar (albeit less blinkered) frustration with Almodovar’s sense of humour.

Despite my hesitation, I agreed to review The Almodovar Collection and I am so glad I did as I now realise that Almodovar is so much more than transgressive images and a succession of dick jokes. My Road to Damascus moment came about half-way through watching Almodovar’s third film Dark Habits. I reviewed it for FilmJuice over here.

One of interesting things about Almodóvar’s career is that while most of his films deal with sexuality in quite a comic fashion, his work rarely comes across as either exploitative or patronising. This not only makes him singularly brilliant at handling female characters, it also allows him to steer his films in some quite unexpected directions. For example, despite revolving around a group of nuns who struggle with unusual desires and unfortunate histories, Dark Habits systematically locates the characters’ humanity and treats them all with the utmost respect. This desire to handle matters of the flesh with the same kind of high-minded seriousness that is usually afforded ‘respectable’ spiritual crises serves to both date and electrify the film as Dark Habits now feels a lot like an attempt to understand the kind of abuses and moral compromises that led to the clerical abuse scandal. How else are we to view a film in which religious figures use their positions to seduce and silence the vulnerable? How else are we to view a film that presents giving in to your hidden desires as a moment of spiritual triumph? Never anything less that morally and spiritually serious, Almodóvar extends understanding but not forgiveness.

I reviewed all six films included in the superb Almodovar Collection box set and I’ll link to a different review every day this week.