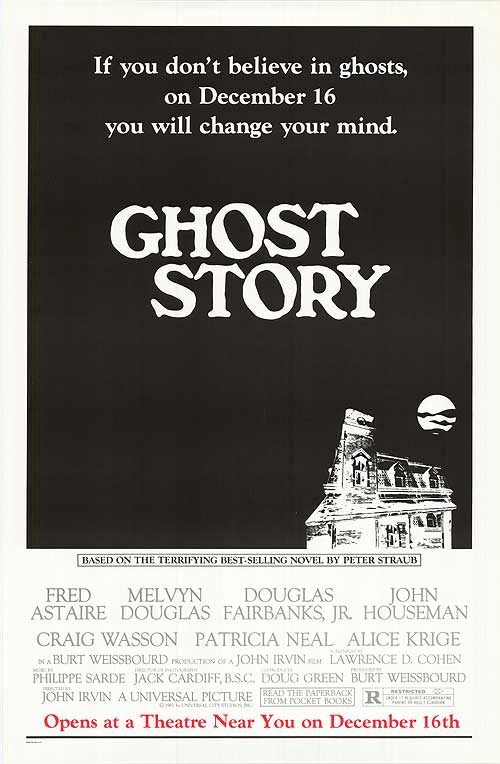 It is easy to see why people might hate this film. After all, it is not and could never be a book by Peter Straub.

The origin story behind Straub’s novel has been extensively documented: Straub has repeatedly stated that Ghost Story was inspired by Stephen King’s early vampire novel Salem’s Lot, a tip of the hat that was later acknowledged by King in his non-fiction collection Danse Macabre where Ghost Story was written up as one of the most influential and structurally effective novels in 20th Century horror. This much we know.

For my part, Straub’s acknowledgement came as something of a surprise as Straub’s approach to fiction has always struck me as quite different to the plodding accessibility of King’s Victorian realism in which the world is just as real and fixed as the characters uncovering it. In Straub’s books, the boundary between world and character is far more mutable, its nuances coaxed into existence by structural complexities and stylistic flourishes designed to keep readers off-balance until a trap is sprung and a particular impression is lodged deep inside the reader’s vulnerable skull. Cocteau famously said that style was a way of saying very complicated things in a very simple manner and Straub is an author who is mostly in the business of using style to coax his readers into receiving certain — often wordless — impressions.

Had Ghost Story been written by Stephen King then one might have described it as the story of a group of old men who are being haunted. As the story unfolds, the men are revealed as having shared a disastrous encounter with a single woman. This encounter not only fills them with guilt, it also seems to account for a litany of emotional crises that have defined their adult lives. Assuming that both world and characters are fixed and real entities, Ghost Story is all about a haunting the grows with the passage of time, consuming not only the lives of the guilty but also the town in which they live. This is the story that John Irvin tried and failed to adapt but the result was a cinematic Ghost Story that is a lot closer to that of Peter Straub than that of Stephen King.