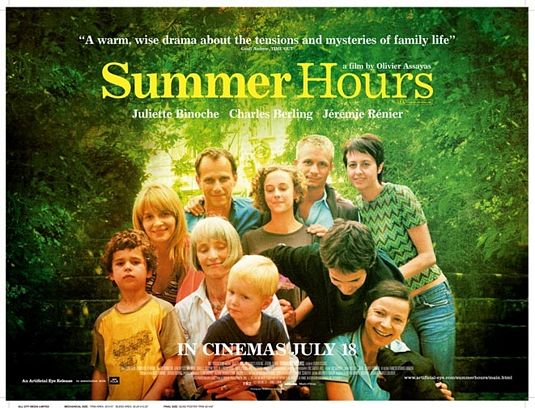 Earlier this week, I wrote a piece in which I commented upon the extent to which our impressions of films are coloured by a lifetime’s worth of experiences. While all critical responses may be anchored in a shared humanity, there is no such thing as a clean or dispassionate read and what you think of a text is likely to be as much a product of your bullshit as it is of the inherent qualities of the text itself.

I wrote that piece and immediately sat down to watch Summer Hours by Olivier Assayas, a film that so closely matches my own personal experiences that it is at times quite uncanny.

A number of years ago, my mother died leaving quite a complicated estate. While I had been serving as my mother’s carer for a number of years, her death put me in a situation where I was legally involved with my much older half-siblings. While these siblings had always been a presence in my life, they had all left home by the time I was about 10 and their subsequent visits became increasingly sporadic and tense as my mother’s emotional stability declined. By the time I was legally manacled to them by my mother’s estate, I was effectively a complete stranger who had been parachuted into their existing group dynamic. While the stress of the situation meant that we all found a way to more-or-less cooperate, it rapidly became quite clear that my siblings and I had very different attitudes towards my mother’s possessions.

As someone who had been in the firing line of my mother’s emotional instability for my entire life, I viewed my mother’s things as a burden in need of lifting… I wanted to be rid of the stuff because I wanted to be rid of my mother and every item that went out the door brought a tangible sense of relief. Though my siblings expressed a number of different attitudes towards my mother’s stuff, one prevailing attitude seemed to be that the stuff was almost sacred in that it allowed one of my siblings in particular to reconnect with his (seemingly far more pleasant) childhood without the person my mother became getting in the way and spoiling his feelings of nostalgia. To this day, I could not tell you which of these two attitudes was the more ‘sane’ or ‘rational’ but we not only saw the objects in very different lights, we were also using them as props in what turned out to be very different psychodramas, which is precisely the theme of Summer Hours.

END_OF_DOCUMENT_TOKEN_TO_BE_REPLACED

FilmJuice have my review of Olivier Assayas’s 70s drama Something in the Air.

Much like Assayas’s near-universally acclaimed Carlos the Jackal, Something in the Air is set in the aftermath of the 1960s just as that much-overstated sense of solidarity and hopefulness was beginning to collapse into the selfishness, divisiveness and cynicism that would later herald the rise of Thatcherism and Reaganism. The film follows a group of French teenagers as they graduate from High school in 1971 and head out into Europe for a summer of self-discovery. However, despite the teenagers being incredibly passionate about their politics and the need to change the world, most of their decisions have little if anything to do with the tomes of political theory they dutifully read and quote:

Despite functioning at an incredibly high level or intellectual and political engagement, Gilles and friends drift from one doomed relationship to another whilst either embracing or rejecting the opportunities that come their way. One of them is dragged into the orbit of a bunch of aspiring terrorists while another joins a commune only to find herself doing all the washing, cleaning and shopping for a bunch of men who are anything but radical in their attitudes to women. Indeed, while some critics have made a lot of the similarities between Something in the Air and Assayas’s earlier film of ill-fated teen revolt Cold Water, a much better point of comparison would be a film like Richard Linklater’s Dazed and Confused as while Assayas’ teens may be living the revolutionary life in a series of beautiful European locations, the decisions they make are ultimately no different to those of Linklater’s suburban Texans.

This suggestion that radical politics are necessarily an affectation that do little aside from lock you into various social networks is very similar to the point Assayas makes by de-politicising the actions of Carlos the Jackal. From my review of Carlos:

By refusing to place Carlos’s actions in any kind of context, Assayas beautifully foreshortens them, reducing them from political actions to social gestures. Indeed, when Carlos and his gang storm the OPEC meeting, it is immediately clear that they have a good deal more in common with the politicians and bureaucrats than they do with ordinary people. Carlos is able to discuss his intentions quite calmly with the various politicians while their civilian underlings quake with uncontrollable terror. The politicians and police know who Carlos is. He knows who they are. Everyone knows the stakes. Everyone knows the risks. It is almost as though they are all friends.

The film is beautifully made and while it is not exactly one of Assayas’s great works, it does do a good job of raising questions about the 1960s at a time when the toxic exit strategy of that particular generation is becoming obvious to all.

As you may recall, I am quite a fan of the work of Olivier Assayas.  Once a critic for Cahiers du Cinema, Assayas has gone on to become one of the most under-rated directors working in France today.  His films generally fall into one of two streams — either they are mercilessly cold tales of espionage set against a corporate background (much like Demonlover) or they are much warmer mainstream dramas about the difficulties people face trying to connect with each other (much like Irma Vep).  As ostensibly different as these the two streams of his directorial career, both share the same unifying vision of human nature.  A vision that is painted in the brightest and most spectacular strokes in his latest film Carlos.

As my Videovista review suggests, Carlos is essentially a human tragedy about one man’s attempt to find a place for himself in a world full of principles and politics but very little human warmth.

So far, Cinematic Vocabulary has focused upon isolated cinematic scenes.  The reason for this is that, while matters of style and technique impact upon entire films, it is frequently easier to isolate these aspects of a film by filtering out issues of narrative and characterisation that tend to function more on the level of entire films than on that of individual scenes.  However, as with atoms and tables, there is a point where the small things come together to form something recognisably large.  This column is about how a series of scenes can link up in order to form a part of a wider thematic arc.

A few months back, I wrote about Olivier Assayas’ Demonlover (2002).  Intrigued by the cerebral and somewhat extreme piece of French film-making, I tracked down the best known of Assayas’ works, Irma Vep (1996).  Set behind the scenes of a fictional remake of Louis Feuillade’s silent era crime pulp Les Vampires (1915), Irma Vep casts Hong Kong martial arts veteran Maggie Cheung as herself playing the titular Irma Vep character.  Much like Truffaut’s Day for Night (1974), Irma Vep uses its film-within-a-film structure to comment upon the nature of film production in general and the health of the French film industry in particular.  The result is a hugely rewarding film filled both with touchingly funny moments of human frailty and insightful critiques of what French film has lost and where it should be heading.

END_OF_DOCUMENT_TOKEN_TO_BE_REPLACED

I recently re-read Joseph Conrad’s Heart of Darkness (1902) for the first time since taking up criticism as an activity.  I originally read the novella as a very straight-forward conceptual breakthrough story in which a Victorian comes to realise the literally horrifying nature of existence.  However, upon further reflection it strikes me that, while sticking to this interpretation of the novella, there are three possible insights to take away from the book :

These three different interpretations represent different solutions to the question of why existence is so horrifying :  Is existence tainted by our actions?  Is it something that is present in the world but escaped from thanks to civilisation?  Or is it something that permeates all of existence, but which we only catch a glimpse of from time to time when we are paying attention?

Critically panned at the time of its release, Olivier Assayas’ Demonlover (2002) is an attempt to provide an answer to this question by considering not only the ways in which humans treat each other but also the ways in which human civilisation deals with the savage nature of existence through its media and its institutions.