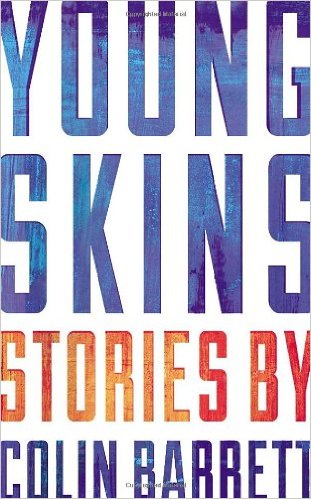 As I reach the finish line, I’m moved to consider whether or not Colin Barrett’s Young Skins is actually a decent collection of short stories. As I’ve mentioned before, Barrett’s name often features in articles devoted to the emergence of a new wave of Irish writers and I think the Glanbeigh stuff justifies his inclusion in those types of curatorial pieces… but only just.

“The Clancy Kid” and “Bait” are hip to gender politics and come with enough ugliness, sensuality and kinetic weirdness to ensure that they linger first in the eye and then in the mind. However, as compelling as the collection’s opening stories may be, nothing else quite manages to reach their levels of either cleverness or artistry.

Presenting Young Skins as a story cycle set in the fictional town of Glanbeigh was a great idea as it encourages us to view the collection’s weaker stories in a flattering light cast by its opening triumphs. However, while Barrett does connect the stories at the level of both place and character, he struggles to find deeper connections and so fails to achieve either stylistic consistency or thematic focus resulting in a collection that rapidly loses its shape despite the diminishing returns offered by the pretence of inter-connectedness. Once you realise that Barrett is never going to build on the achievements of those opening stories, you are left with the frustrating and the merely passable.

Young Skins’ final story “Kindly Forget My Existence” is an excellent case in point as while it would appear to be set in the same place as “The Clancy Kid” and “Bait” it is actually an entirely generic piece of literary writing that could have been written by almost anyone and published almost anywhere.

When I use the term ‘literary’ I mean fiction that conforms to the aesthetic ideals laid down by the great French novelists of the 19th Century: Fiction about carefully-drawn characters who drift through realistic landscapes on elegant and comprehensible trajectories from one relatable psychological state to another. As Samuel R. Delany once put it, fiction that is ruled by the tyranny of the subject.

“Kindly Forget My Existence” is set in a pub where two old friends meet each other whilst avoiding the funeral of a former lover. They meet, they chat, they share a moment, and they depart subtly changed. Barrett delivers the substance of the pair’s relationship in the kind of extended info-dump you would expect to find in a work of 1950s science fiction.

As you know, Bob:

The trouble started with the single. For the major’s album, Ley Lines, Maryanne had sung lead on only one song, a B-side that was shifted up onto the official tracklisting at the last minute, but that song was the hit. Every interview and public appearance thereafter was an exercise in clarification. What the world wanted was more folk-pop gems smoulderingly essayed by the willowy brunette – instead it got more Doran, howling and spitting on his haunches over lengthy, bristling compositions. The classic soap-operatics kicked belatedly in: at some ill-advised point Doran and Maryanne began sleeping together. The tour just would not stop. As things soured Maryanne migrated from Doran’s bed to Eli’s. Eli had been sadly, silently in love with her since…

I don’t tend to read a lot of literary fiction as I don’t buy into the theory of mind that underpins this type of writing. While it may come in many different forms and be written from many different perspectives, literary fiction assumes the centrality of the subject in human affairs. Literary fiction assumes that people are composed of memories, beliefs and instincts that fit together to form a coherent self or subject. It is important for the characters in literary fiction to be well-drawn and connected to their world because the form assumes that a) real people are also ‘well-drawn’ and b) it is as a result of being ‘well-drawn’ that we are able to make decisions and interact meaningfully with the world around us.

I am not a fan of literary fiction as I don’t think that real people are well-drawn. I think that our consciousness is profoundly alienated not only from the people and places around us but also from our own decision-making process. There is no ‘well-drawn’ homunculus sat in my head working the controls but there is a natural tendency to connect decisions-made with memories-stored and so construct something that looks a lot like a coherent, decision-making self.

Literary fiction is a house built on sand in so far as it uses a fictional construct as a focal point for exploring everything from personal psychology to philosophical themes. To my mind, this makes literary fiction a complete fantasy… a dream of coherent selfhood that is no less childish and pernicious than the fantasies of moral omniscience underpinning all of those Billion-dollar comic book movies.

What drew me to the opening stories of Young Skins was the suggestion that Barrett understood our fundamental lack of coherent agency. Both “The Clancy Kid” and “Bait” appear to contain traditional characters but rather than drawing them in detail, Barrett presents them as victims of systemic social forces that don’t so much move along elegant arcs as explode on contact with the world. Had Barrett used the collection’s story cycle-like structure to expand upon these themes then Young Skins might have been a triumph. Unfortunately, rather than broadening this vision, the collection is limited to stating and re-stating the same basic ideas until they lose all impact. For example, “The Moon” is essentially the same story as “The Clancy Kid” and “Bait” except that Barrett replaces the evocative elusiveness of the early stories with a more conventional stab at psychological profundity. The result was not only under-written characters but characters whose psychological thinness raised serious questions about the ideas that inspired “The Clancy Kid” and “Bait”. Indeed, if Barrett can’t unpack the ideas he gestured towards in the early stories then what does that tell us about the coherence of those ideas to begin with? Similarly, when “Diamonds” took the elusiveness of “The Clancy Kid” and applied it to a slightly different subject matter, the result was not more-but-different elusiveness but a devalued elusiveness whose thinness made it feel as though Barrett were being evasive. Maybe Barrett wasn’t being evocative and acknowledging the bafflement at the heart of the human experience… maybe he was just over-writing certain passages in an effort to distract us from the fundamental thinness of his ideas?

“Kindly Forget My Existence” is a poor story both in terms of its overly-familiar content and the light it shines on the other stories in the collection. While “The Clancy Kid” and “Bait” encourage us to give works like “The Moon” and “Calm with Horses” the benefit of the doubt, “Kindly Forget My Existence” feels so immature and generic that you cannot help but question the benefit of the doubt you granted to each and every story in this collection. Does Barrett have interesting things to say about the self and male identity or is he just another creative writing graduate with a greasy pole to climb and nothing much to say? My feeling is that the correct answer would have been more obvious had Barrett waited a little bit longer before publishing this story cycle as the gap between great stories and crap stories is way too wide to provide us with much insight into the writer that he will eventually become