It is now quite common to speak of a need for greater diversity in the media that we produce and consume, but where does this ‘diversity’ reside? Are we calling for a more representative creative class or media that speaks to the desires and interests of a more diverse population? Clearly, taking a monolithically straight, white and American cultural form such as the contemporary Superhero film and adding a few token non-whites and non-straights would do little to improve the situation. One diversity-container that frequently gets overlooked is the idea of ‘spaces’ and how those spaces help to shape experiences and build cultures. This is something of a pity as LGBT cinema does spaces better than almost any other form.

The unrivalled king of gay spaces is the French director Jacques Nolot. One-time lover of Roland Barthes and protégé of Andre Techine, Nolot has devoted his cinematic career to the marginal spaces around gay culture. His second film Glowing Eyes is set in a porn cinema and explores not only the fluid nature of the identities and relationships created by the space, but also the importance of such spaces as venues for experimentation and self-expression. While Glowing Eyes is all about a space that allows entrance to different forms of sexuality, his third film Before I Forget examines the end game and the almost post-apocalyptic spaces opened up by disease, death and the end of gay men’s lives. These is a lovely scene in Before I Forget where Nolot’s character lets himself into an old boyfriend’s house in order to secure something of value for all those years of companionship. What he finds is that the dead man’s family have swooped in to pick the place clean forming an unspoken case for gay marriage at least as powerful as the one buried in the subtext of Steven Soderbergh’s Behind the Candelabra. Structured like a thriller, Alain Guiraudie’s Stranger by the lake is perhaps not quite as brave as Nolot’s thunderously un-commercial works but his desire to recreate and explore a gay space is no less fascinating.

Set in an unnamed place at the height of French summertime, L’Inconnu du Lac constructs a series of interlocking cruising spots around a beautifully pristine lake. It is something of a cliché to say that a film’s setting is almost a character in its own right but Guiraudie devotes so much attention to the lake, beaches, car park and woods comprising his cruising spot that his characters seem almost faceless by comparison. In fact, the facelessness of the characters is one of the film’s recurring themes.

The lake itself is beautiful but the beach is astonishingly rocky. This means that whenever two characters want to hang out, they are forced to share a bath towel thereby ensuring that sexual tension and the dissolution of private space is built right into the setting. Throughout the film, various characters obsess about parts of the landscape, suggesting that certain forms of behaviour that are acceptable on one part of the beach are not acceptable on others. For example, there are frequent references to an (unseen) side of the lake where the straight people go and one of the characters chooses to sit in a particularly rocky bit as a way of signalling his lack of interest in company.

As fascinating as the space’s architecture may be, Guiraudie elaborates the role of sight and glances in the etiquette surrounding cruising spots. In one memorable scene, a couple look up from their conversation and notice the presence of a furiously-masturbating man. Irritated by this breach of etiquette, one of the men invites the voyeur to come back a few minutes later when they’ll actually be having sex. The film is littered with scenes in which men pass and re-pass each other in the woods, trying to avoid or capture each other’s eye. At times, the activity is so frantic that it becomes downright comic thereby posing the question as to why the rules of etiquette exist in the first place? Surely everyone is there for the same reason? Nolot would doubtless suggest that such etiquette provides gay and non-gay men alike with protection from the various consequences of walking up to a stranger and asking them for sex but Guiraudie is content to sit back and smile.

The film’s plot is admirably character-driven in the sense that everything that happens in the film happens as a result of men with different agendas having to share a single space. Far from providing a reductive view of male sexuality, Guiraudie goes out of his way to suggest that different men would want different things from a cruising spot. For example, one character is quite explicit about his desire for sex and is rather taken aback by the suggestion that he might want to share a drink or a meal with the men he happens to fuck. This contrasts beautifully with Henri (Patrick d’Assumçao) a corpulent divorced man who keeps returning to the cruising spot for reasons that appear to have nothing to do with sex and everything to do with an honest desire for male companionship. Between these two extremes is the film’s protagonist Franck (Pierre Deladonchamps) who uses the space for sex but sees good sex as a necessary stepping stone towards love and relationships. There is a real air of sociology about Guiraudie’s characterisation and his admitted desire to project various aspects of the gay experience onto different characters and then force them to interact makes for a film that is never anything less than compelling. However, about a third of the way through the film, Guiraudie decides to stir the pot and so has one of the characters murder one of the others prompting a police investigation. 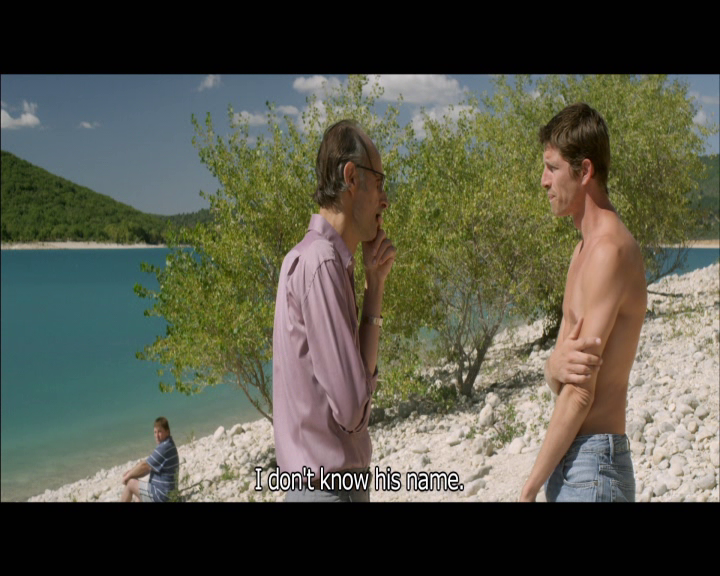 The police inspector (Jerome Chapatte) is about as close as this film gets to a straight point-of-view character. Refreshingly sensitive and enlightened, the Inspector is forced to learn the lay of the land before daring to ask why it is that two men can spend the entire day together and yet never think to ask for each other’s name or contact details. It is in these moments that we can sense Guiraudie’s frustration with his own community as the Inspector’s questioning builds and builds towards real anger at the fact that the men of the lake seem completely unconcerned by the presence of a murderer amongst them. Are they so lacking in empathy that they do not care that one of their own has been killed? Are they so lacking in self-preservation instinct that they will do nothing to stop a murderer who could very well target them next?

While Guiraudie’s understandings of gay spaces and the social attitudes that construct them are rigorous, fascinating and deeply humane, there is also a wonderful sense of weariness to the film that emerges from the fact that the audience is always a couple of steps ahead of the characters: We know that Henri just wants a chat before anyone else, we know the identity of the killer before the other men, we know the lay of the land before the inspector and we know the foolishness of Franck’s romanticism before the worse happens. I can’t help but wonder whether the amused worldly cynicism that Guiraudie forces upon his audience might not be an evocation of the passionate calculation that goes into all of those looks and glances.