Kim Longinotto and Florence Ayisi’s documentary Sisters in Law is best understood in terms of its relationship with Longinotto’s earlier films Divorce Iranian Style and Runaway. Divorce Iranian Style put Longinotto’s camera into an Iranian family court where Women tried to use their country’s sexist legal infrastructure to protect them from their abusive and manipulative husbands. Eye-opening in its depiction of Iranian female agency and moving in its uncompromising commitment to women’s stories, Divorce Italian Style is a powerful film made even more powerful by Runaway, a film about what happens when the system fails and women are forced to flee their family homes. Formally very similar to Divorce Iranian Style, Sisters in Law finds the British documentarian Kim Longinotto filming various legal proceedings in the Cameroonian town of Kumba where it has been seventeen long years since the last conviction for spousal abuse. 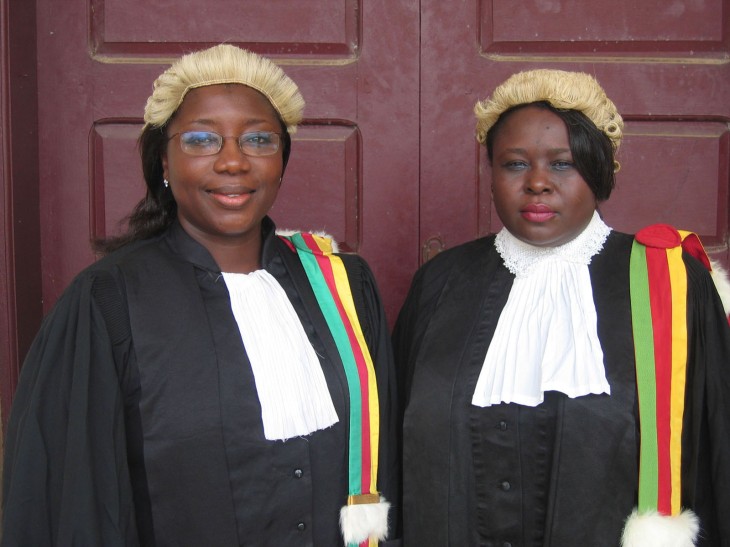 The film is spread across four main cases, two involving very young girls and two involving grown women who are trying to free themselves from their abusive husbands. While Longinotto does not exactly spell out the connections between the various cases, it is quite clear that the tendency to view young girls as objects is a manifestation of the same set of social attitudes that tolerates the rape and battery of full-grown women.

The first case involves a ten year-old girl who was kidnapped and raped by a neighbour. This case really sets the tone for the entire film as well as the relationship with the earlier films about Iran as the little girl is completely unintimidated by the legal proceedings and explains what happened to her with an amazing amount of clarity and precision. Long used to hiding behind a veneer of social respectability, her rapist mumbles something about the bible before claiming that the (then) nine year-old girl approached him for sex and solicited a fee of about 20 pence for her services. The court is unimpressed and sentences the man to nine years hard labour and forced repatriation to his home country of Nigeria.

It is only at the end of the film that Longinotto allows the lawyers to mention the seventeen year gap in convictions for spousal abuse and this actually comes as a bit of a surprise as the female judges and prosecutors seem supremely confident in their ability to achieve justice. This confidence in the law as well as in themselves visibly filters down to the women they represent and the film concludes with some lovely scenes where a female judge speaks to a classroom of aspiring female lawyers warning them not to be coy or shy.

The second case involves a man who happened to notice a young girl hanging around his local church. Having failed to convince the young girl to go home, the man decided to take the young girl home and discovered that her small malnourished body was absolutely covered with scars. Presented to a prosecuting lawyer, the little girl calmly names her auntie and so begins the unravelling of a home life in which a little girl was relentlessly beaten and forced to work for the terrible crime of being born to a mother who could not look after her.

This case also exposes one of the film’s more powerful themes as when the little girl’s aunt is brought in to account for her actions, her defence constitutes nothing more than an appeal to convention: When a child misbehaves, you must beat it… the only reason the little girl is covered in scars is because she angered her auntie who was well within her rights to punish the child. Except that she wasn’t…

The real difference between Divorce Iranian Style and Sisters in Law is that while the Iranian courts were in the business of protecting the institution of marriage and ensuring that women remained in their place, the courts of Cameroon are evidently invested in the idea that all women have basic human rights including the right to not be beaten and the right to rid themselves of an abusive husband. This too gives the women confidence.

The third case involves a woman who was married to a brutal and uncaring man. Initially, she follows the example set by the women in Divorce, Iranian Style by trying to use an assault charge to force her husband into consenting to divorce. Much like the men in the films about Iran, her husband stresses his sovereignty as a husband and the need for his wife to return home and cease being ‘ungovernable’. In fact, there is even an exact replica of a scene in Divorce, Iranian Style where the woman meets with the older men from her husband’s family in an attempt to broker some kind of agreement that is not forthcoming as her husband simply does not seem able to grasp the idea that you’re not allowed to beat your wife. Before we know it, the woman is pressing charges and her husband is being sentenced to years of hard manual labour and when the woman petitions for divorce, it is duly granted by a group of Islamic male lawyers who mumble about refusing to surrender to female pressure before dutifully granting the woman her freedom.

If Sisters in Law can be said to have a point – aside from continuing Longinotto’s excellent work cataloguing women’s attempts at dealing with oppression – then it is the massive impact of allowing women to become fully functioning members of a country’s legal infrastructure. Divorce Iranian Style and Runaway may show women fighting oppression in every way they can but it is quite clear that their powers only ever extend as far as the water’s edge and that all of their efforts would likely amount to nothing should a man decide to put any serious effort into thwarting them. Sisters in Law shows women who are unbowed by either legal procedure or convention precisely because women like Court President Beatrice Ntuba and State Prosecutor Vera Ngassa are there to provide women with support and the belief that they will receive a fair hearing. The impact of female lawyers and judges is made particularly clear in the case of a woman who tries to bring charges against her abusive reverend husband. Many of the earlier cases involve people appearing before a judge with only a state prosecutor to speak on anyone’s behalf. In fact, one suspects that one of the reasons why many of the women and children in this film enjoy legal success is because Ngassa is speaking before a sympathetic judge with nobody to protect the defendant’s interests. The final case is something of a departure from this model as the reverend is wealthy enough to secure the services of an almost unbearably smug male lawyer who appeals to the law and to ‘traditional’ values in almost equal measure. While IANAL, even I noticed the way that the male lawyer would use words like ‘loose’ and ‘traditional’ to frame the case: When the woman left home because of her husband’s relentless brutality and returned home only to leave immediately, the lawyer describes her as having become ‘ungovernable’ after many months of ‘loose’ living after which he suggests that the woman might well have been having an affair. Conversely, when the man’s paranoia and shame begin to get the best of him, he began to demand that the woman never leave the house, which is presented as the ‘traditional’ right of a husband. Gloriously, the male lawyer’s arguments are torn to shreds and the husband winds up facing either jail or a heavy fine but it is easy to imagine what might have happened had a female lawyer and a female judge not been present to remember and enforce the woman’s basic human rights.

Aside from providing a wonderful counterpoint to Divorce, Iranian Style, Sisters in Law also shows Longinotto’s evolution as a filmmaker as while both films are ultimately little more than series of filmed legal proceedings, Sisters in Law manages to juxtapose the various cases in a way that carries significantly more emotional power and thematic depth. Though not quite as ambitious as a film like Dreamcatcher, Sisters in Law is still a fascinating collection of stories about women and the challenges they face.