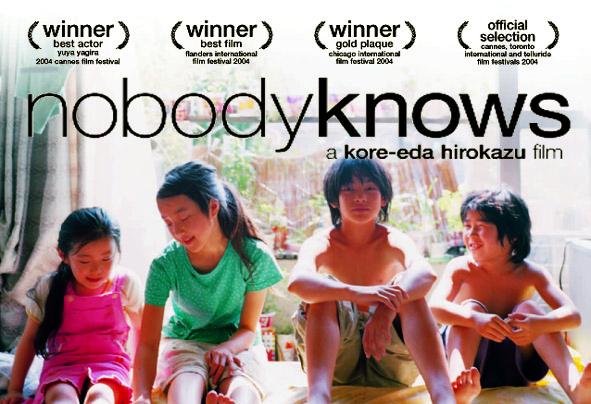 Art house film is a really shitty cultural milieu. Back in the 1960s, when European directors began to chafe against the studio system and competition from an ever-expanding Hollywood machine, they looked to the East for legitimacy and proof that cinema didn’t need to be about three act structures and infantilising melodrama. The history of European film may be dominated by European names but those early Japanese victories in Berlin served to remind the world that Hollywood is not the default option when it comes to film. Half a century later and Japanese film is treated in the same cavalier fashion as every other piece of non-English language cinema: Invisible until someone has a breakthrough at which point the floodgates open until everyone gets bored and moves on to the next big thing. Don’t believe me? When was the last time you saw a Spanish horror film or French thriller at your local cinema? Was it after one Spanish horror film or French thriller had a breakthrough success? I thought so.

It is now a long time since a Japanese film was embraced by European audiences and so the lines of communication with the Japanese cinema scene are growing increasingly faint. Fancy watching a cartoon series about World War II battleships that are anthropomorphised as sexualised pre-pubescent girls? No problem! There’s a massive website that will sub-title that shit and stream it so that you can see it at the same time as Japanese people! Fancy watching a Japanese live-action film that peels back the surface of Japanese social problems and exposes the embattled spirit that all humans share regardless of their race, gender or sexuality? Yeah… that might appear on DVD eventually but only if it does well at Cannes. Clearly, Japanese directors are missing a trick by not having their intricately-drawn characters be semen-drinking demons that look like 10 year-old girls.

Hirokazu Koreeda is one of only a handful of Japanese directors who retain some visibility in the West. Over the past twenty years, his films have charted the emotional landscape of contemporary Japan with a degree of humanity that nearly justifies Koreeda’s reputation as heir to the cinematic tradition of Yasujiro Ozu. Released in 2004 and winner of the Best Actor award at the 2004 Cannes Film Festival, Nobody Knows finds Koreeda using one of his favoured narrative techniques: Taking inspiration from a contemporary news story and producing a film that unpacks the emotions underpinning not only the story but its relationship to Japanese society.

The film opens with a mother and son moving into a new apartment building. The building is rather down-at-heel and the small family appears not to have much money and yet they struggle up the stairs with huge, heavy suitcases. Contained within the suitcases are the rest of the woman’s children but because she cannot afford the rent on an apartment large enough for five people, she is forcing three of her children to remain hidden while she works and her eldest son Akira (Yua Yagira) runs errands and keeps everyone fed.

Initially, this unconventional family set-up passes muster as the mother (played with real relish by the squeaky-voiced Japanese TV personality You) is intensely charismatic and manages to keep the mood elevated with her infectious energy and fondness for theatrical gestures. The cracks begin to form when the mother begins spending more and more time at work. This allows Koreeda to gently guide the audience away from the mother’s point of view and towards the viewpoint of her exhausted older children. 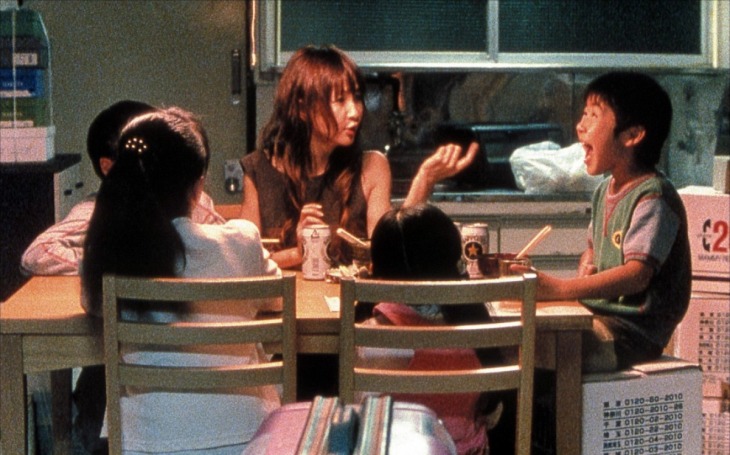 The less time the mother spends in the flat, the worse her treatment of the children begins to seem. For starters, none of the children are allowed to go to school and what time the eldest boy Akira has to study is eaten away by his need to shop, cook and fend for his entire family. By the end of the film, the only studying he gets to do is arithmetic as he and the eldest sister survey the perilous state of the family’s finances.

As the film progresses, the mother’s appearances become less and less frequent until she disappears altogether. At first, the children continue to play the roles assigned to them by their mother but the family’s lack of money forces them to start improvising and finding their own way in a manner that perfectly captures that moment when a child’s personality ceases to be a parental conceit and becomes a real force in the world. Crushed by responsibility, Akira becomes playful and begins hanging out with a bad element until he is gently brought back into line by an eldest sister who expands beyond her role as ‘sensitive artist’ to become the family’s pragmatic streak.

The tension between the personalities the mother wanted her children to have and the personalities the children need in order to survive comes to a boil when the water, power and gas are unceremoniously cut off. Realising that his family will not survive in the shape his mother had intended, Akira takes his siblings’ shoes out of the cupboard and invites them out into the world. Now they are free but they also have each other.

At nearly two and a half hours long, Nobody Knows is definitely not in a hurry. Rather than giving his young actors lines to learn, Koreeda chose to walk his charges through their characters’ position in the narrative and invited them to come up with their own lines of dialogue. The result is an amazing collage of subtle character moments as Akira drifts back and forth between the demands of his family and his desire to be a man, have friends, play games and even meet girls.

Nobody Knows is based on a real-life case of child abandonment in which four young children were smuggled into a small apartment and left to fend for themselves by a mother who decided to move on with her life. Interestingly, the details of the case suggest that reality was far more dramatic and unsettling than the recreation staged by Koreeda but the slap on the wrist received by the real-life mother (a suspended sentence) hints at the real theme of the movie.

Nobody Knows is not just a film about terrible parenting or growing up and becoming independent of your parents’ expectations, it is also about Japanese attitudes towards the young. Immerse yourself in the same Japanese popular culture that gave the world sexy pre-teen battleships and you will find a landscape forged by the pressure to succeed: Characters in Japanese popular culture worry about being made class president, getting into the right after-school club, getting into the right revision classes and getting into the right university. To the Western eye, these pressures seem almost surreal as characters frequently merge their emotional needs with their need to be successful creating bizarre plot-points such as Love Hina‘s insistence that its male protagonist must work out his true feelings prior to finals because he can only ‘go to university’ with his one true love. These pressures are now so intense that some young men collapse under the pressure and retire from society to the point where they no longer feel psychologically capable of leaving their rooms. The fact that Nobody Knows features a family who cannot go outside may evoke the Hikikomori but the film’s real force lies in the suggestion that Japan’s youth are seen as a disposable commodity who are loads of fun to have around but easily dumped once they start to become a burden.

The film’s attitudes to Japanese youth further explored in a sub-plot involving a teenage girl whom the family befriend after Akira notices that she doesn’t seem to be spending much time at home. When the family begin to run out of money, the girl takes it upon herself to start singing karaoke with middle-aged men (whilst wearing her school uniform) and offers Akira her earnings as a gesture of both charity and solidarity. Akira is outraged by the idea of the girl performing for older men and he turns his back on her but while the suggestion is that Akira is in love with the girl, there is also an element of disappointment as Akira has learned to move past adult expectations while the girl is literally trading on them and drifting towards under-age sex work as a result of it. This objectification and commoditisation of youth is particularly evident in the scene where one of the children dies, forcing the family to pack the body in an old suitcase and leave it near the airport like a collection of soiled summer clothes that nobody could be bothered to come and pick up. 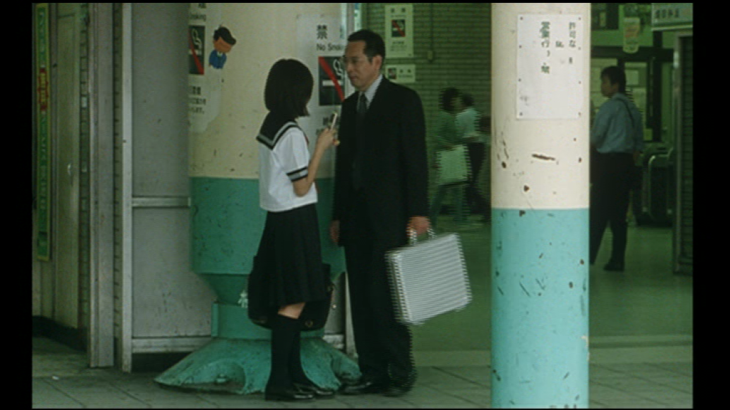 Some critics have hailed the film for its ‘dream-like’ feel and I think that has a lot to do with the film’s deliberately slow pacing and Koreeda’s fondness for the old Ozu-ian saw of hitting an incredibly subtle character beat before cutting away to images of trees or bustling streets as a means of giving the audience time in which to process what it is they have just seen. Having said that, what does make the film slightly dream-like and fantastical is its transformation of space. At the beginning of the film, Koreeda emphasises the claustrophobia of the small apartment and the squalid nature of the family’s existence but more the children disentangle themselves from the lives of their mother, the more the camera begins to focus on the apartment’s balcony and the sense that there is a big beautiful world out there that the kids can make their own. Thus, what begins as a story of abandonment slowly unravels into a story of emancipation from a society that claims to protect and educate children but is in truth only interested in using them.