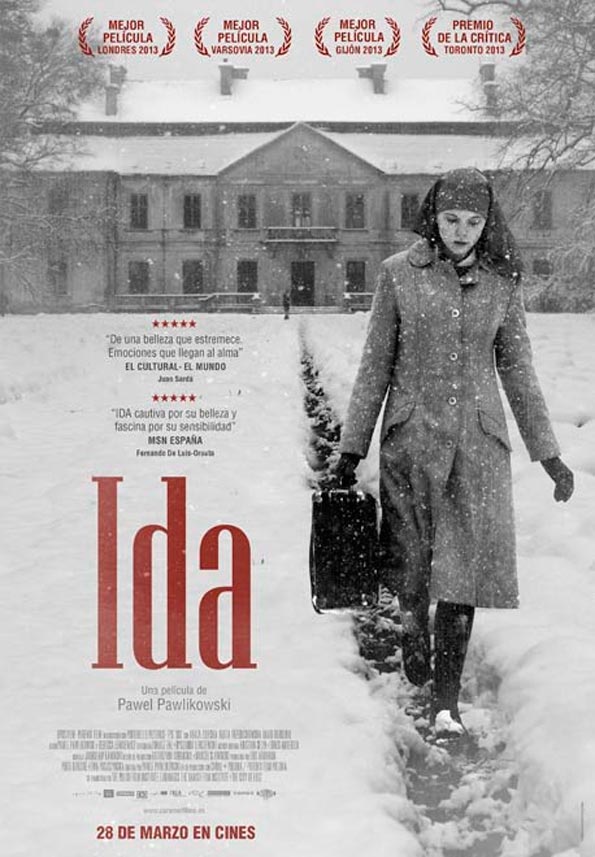 FilmJuice have my review of Pawel Pawlikovski’s Ida, a starkly beautiful but terrifyingly under-written film about 1960s Poland.

The film is set in a starkly shot 1960s Poland where an young orphan woman prepares to take orders and become a nun. Worried that this young woman has never experienced life outside of a convent, her abbess orders her to visit with a woman who claims to be her lone surviving relative. Reluctant at first, the young woman travels across Poland to meet with a woman who turns out to be a hard-drinking socialist prosecutor with a fondness for younger men and a Jewish name. Confronted with the fact that she is actually Jewish, the young novice follows her aunt as they travel back to their family’s home town in order to confront the people who killed their family and forced them off their land.

When Ida was released back in 2013, it was received with as much warmth and submissive zeal as the second coming. Not only did it win the Grand Prize at the BFI London Film Festival but reviewers seemed to fall over themselves to declare it a masterpiece while blisteringly high Rotten Tomato and Metacritic scores made it something of a cross-over hit at the American box office. This depresses me a great deal as Ida is a desperately mediocre piece of cinema.

My review blames Pawlikovski’s script for failing to unpack either the emotions or the ideas touched on by the film:

A script with an interest in Polish religious history might have unpacked the implications for Anna’s late-blooming Judaism and explained why discovering that you are Jewish might want to make you think twice about becoming a nun. Similarly, a script with an interest in Polish political history might have noted that Jewish people were purged from the Communist party a few years after the events of the film and explored the way in which a rising tide of anti-Semitism would have forced a respected political prosecutor into near-exile for the crime of being Jewish. By choosing to gloss over the cultural, political and social context of Ida’s journey of discovery, Pawlikovsky ensures that the events of her life are forever lacking in emotional charge.

With hindsight, I now realise that the problem is far more basic.  Consider what I said about one of Pawlikowski’s earlier films The Woman in the Fifth:

There was a time when European art house film wanted to blow shit up. There was a time when values were confounded and new ground was broken both in terms of what could be said and how people could say it. European art house film used to shock the world… now it merely puts bums on seats by engaging with the same old themes in the same old ways. In the land of artistic sterility, competence is king and Pawel Pawlikowski’s The Woman In The Fifth is an eminently competent film.

Ida is another supremely competent piece of film making that looks a lot like a serious work of cinematic art despite being little more than a hollow vessel with nothing to say. Pawel Pawlikovsky is a miserable hack who makes cynical, unadventurous and boring films that degrade the language and sully the reputation of art house film. In a more enlightened age, critics would have called him out and exposed his cynicism but now they hail him as a genius. According to his wikipedia page, Pawlikovski teaches direction and screenwriting at the National Film School in the UK and this saddens me even more than this film’s undeserved success. Art house film should be about more than competence but that is ultimately all that Pawlikowski has to offer us.