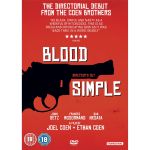 FilmJuice have my review of Joel and Ethan Coen’s first film Blood Simple. Or rather, the slightly shorter director’s cut that was released about fifteen years after the original film.

I found this review quite difficult to write as while I have seen and enjoyed most of the Coen Brothers’ films, I’m also acutely aware that their work invariably seems less substantial the more you think about it. Though some of their films are easily dismissed as more-or-less enjoyable tosh, some of their films feel like substantial dramas. Indeed, both A Simple Man and The Man Who Wasn’t There seemed intellectually robust when I first saw them but I am now hard pressed to remember anything about them aside from a couple of throwaway gags. Blood Simple felt very similar in that it is a film that does a great job of looking smart even though it is really little more than a pastiche:

Clearly inspired by such hardboiled crime novels as Dashiell Hammett’s Red Harvest and James M. Cain’s Double Indemnity, Blood Simple takes a collection of film noir clichés, drives them out of the city and deposits them in a crummy bar at the tail end of Texas. Stripped of their tilted fedoras and artfully crumpled raincoats, the clichés valiantly attempt to start new lives but eventually find themselves sliding back into old familiar habits.

Watching Blood Simple, I couldn’t help but reflect upon the fact that the dividing line between a ‘smart’ film and a ‘dumb’ film is often a question of viewer charity as a charitable viewer is more likely to detect meaning and symbolism than someone who is bored out of their tiny mind. Indeed, skilled directors know that it is possible to make a film seem smarter by using some of the visual and stylistic cues that people associate with smartness. For example, even though Jon Favreau’s Iron Man and Christopher Nolan’s The Dark Knight Rises do not actually say anything substantial about either the War against Terror or the Occupy movement, visual references to both of those real world events goaded critics into assuming both films had elaborate political messages. Similarly, art house films such as Eugene Green’s The Portuguese Nun and Carlos Reygadas’ Silent Light are so good at looking like serious intellectual films (long takes, lots of silence, beautiful photography, impressions of interiority) that many critics simply assume that they were in fact serious art house films filled with deep and meaningful truths.

Blood Simple is very much like a Batman comic in so far as it looks really dark, twisted and psychological but that look is ultimately all it has to offer. Watching Blood Simple I began to think about whether No Country For Old Men is a smart film or merely a film that looks smart… is there any difference? Does ‘smartness’ actually exist outside of the audience’s heads?