When the golden age of 1970s Hollywood came to an end and the studios reasserted their control there were many unworthy casualties. The great tide of the American New Wave had surged up the beach and rolled back to a sea of spiralling budgets, slumping revenues and bottomless self-indulgence. One of these casualties was Ivan Passer’s adaptation of Newton Thornburg’s novel Cutter and Bone (1976).

Buried in a corporate shake-up and largely forgotten until its DVD re-release, Cutter’s Way is very much a product of the American New Wave. Ostensibly about a pair of misfits investigating a conspiracy to protect a wealthy industrialist, the film taps into the same cultural anxieties as Alan J. Pakula’s political paranoia trilogy comprising Klute (1971), The Parallax View (1974) and All the President’s Men (1976). However, rather than pandering to the audience’s belief that someone is out to get them, Passer’s film presents its conspiracy in a deeply ambiguous manner. Indeed, Cutter’s Way is a film that asks whether the tendency to see conspiracies everywhere might not in fact be a reflection of a deeper psychological need to be appreciated and desired. After all… if people are out to get you then that must mean that they consider you worth getting. Far more than a simple conspiracy thriller, Cutter’s Way is an exploration of the comfort that can be had in being a victim.

The first thing that strikes you about this film is its oddly disconnected atmosphere. A series of grubby motels, colourful street parades, pristine tennis clubs and run-down suburbs, it looks as though Cutter’s Way was shot all over California and that, lacking any coherent geography, the filmmakers combined the footage under the fictional sobriquet of ‘Santa Barbara’. Visually striking, these sudden changes of atmosphere create the impression of a life lived on the edge of schizophrenia, a life where nothing fits together and nobody really gets on. At the centre of this web of disconnect are two oddly mismatched friends.

Richard Bone (Jeff Bridges) is a handsome, pleasant but ultimately feckless man. Supporting himself by looking good and hanging around rich people until they buy him things, Bone is drifting through life without commitments and without ever having to have an opinion about anything. Even when a wealthy friend offers him a job as a yacht salesman, it is on the understanding that all he really needs to do to earn his money is look good on deck.

Alex Cutter (John Heard) is everything that Bone is not. A war veteran who lost an arm, a leg and an eye in battle, Cutter is a hideously unpleasant drunk who wastes his considerable intelligence on throwing himself into any situation that presents itself to him. In one early scene, Cutter’s racist posturing manages to antagonise a bunch of African Americans in a bar but rather than back down or apologise, Cutter tries to suck other people into his pit of misery: “What was it you called them when your car got stolen?” he sneers as Bone tries to radiate disapproval at Cutter in a way that will not also broadcast his intimacy with a drunken racist.

Stuck between these two unlikely friends is Mo (Lisa Eichhorn). When Mo first appears with a bottle of vodka in her hand, Bone points out that she looks beautiful. Sadly, it is difficult to disagree. Mo is married to Cutter but she clearly no longer loves him, what keeps her by his side seems to be a combination of pity and nostalgia for the man he was before he was wounded in battle. Despite the fact that her marriage is slowly killing her, Mo cannot quite summon up the courage to leave Cutter because Cutter is a cripple.  Cutter not only seems aware of this fact but repeatedly spells it out to anyone who will listen. This unhealthy relationship is mirrored in the fact that Bone is clearly head-over-heels in love with the ethereal Mo. Apparently, the man who cannot commit to anything is deeply committed to loving his best friend’s wife and because she is his best friend’s wife, he cannot bring himself to act upon his desires.

Hideously unhappy and yet completely incapable of turning their backs on each other, these three characters feed on each other’s highs and lows, their victories over one another just as sweet as their defeats because their defeats remind them of why they are there and why they cannot possibly leave. Despite their differences in temperament, outlook and ambition, these three characters are one.

One night, when Bone is making his way home, he happens upon someone dumping something in an alleyway.  Thinking nothing of it, he continues home only to be dragged in for questioning by the police who found his car parked next to what turned out to be a dead body. Initially claiming complete ignorance, Bone later points out that the man he saw dumping something resembles a wealthy local industrialist. Almost immediately, Cutter sets about trying to convince Bone to blackmail the industrialist.

While Cutter initially comes across as a spiteful and viciously self-destructive drunk, his engagement with the murder case transforms him. No longer relying upon other people to physically carry him around, Cutter disappears for hours at a time returning with some new fact supporting his hypothesis that a local industrialist is a rapist and a murderer. As in the bar, Cutter works hard at convincing Bone to commit himself to a plan of action but Bone, as ever, remains infuriatingly elusive.

As one might expect from a film that rests upon two interlocking character studies, Cutter’s Way owes much of its power to the intensity of its central performances.  Heard and Bridges were brilliantly cast as, aside from their intense on-screen chemistry, the pair actually bear quite a close physical resemblance to each other. Indeed, as Bone castigates Cutter for his impetuous nature and Cutter bewails what he sees as Bone’s cowardice, there is a very clear sense in which we are seeing two aspects of the same person. The beautiful but feckless Bone is a complete reversal of the disfigured but brilliant Cutter and the pair’s frequent verbal jousts can easily be read as a physical manifestation of a single conflicted soul trying to reach a decision. The idea that Cutter and Bone are two parts of the same person also sheds an interesting light on their relationship with Mo.

The film introduces us to Mo when Cutter is not around. Her easy rapport with Bone and the pair’s obvious sexual attraction to each other suggest that it is they rather than Cutter and Mo who are the natural couple in this particular love triangle. However, while Mo neither desires nor particularly likes Cutter, her feelings for him are much stronger and much more genuine. While Mo may ‘like’ Bone, she loves Cutter even though that love may have turned into pity and resentment.

Working hard to lure Bone into his plan to blackmail the industrialist, Cutter painstakingly spins the facts into a conspiracy theory. The conspiracy certainly matches the facts as we know them but, in a brilliant move, Passer never explicitly states whether or not Cutter is correct. When Bone wanders past the dumped body, the audience never sees the murderer’s face.  When a house is blown up and someone dies, the film never reveals whether or not the fire was started in an attempt to cover the murderer’s tracks. By repeatedly stressing the ambiguity of the film’s central conspiracy, Passer shifts the emphasis from the murder itself and onto the characters’ motivations for wanting to solve it. 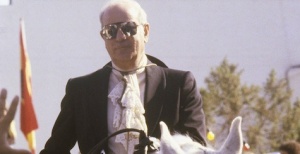 The question of whether Cutter and Bone will attempt to blackmail the industrialist is tightly interwoven with the broader issues affecting the pair’s relationship. For example, Bone does not want to commit to a plan of action because commitment is not what Bone does. Similarly, Cutter is eager to get things moving and suck people into his way of seeing the world because that is simply what Cutter does. The idea that the conspiracy exists solely in Cutter’s mind is communicated by the fact that the industrialist only ever appears on horseback whilst wearing mirrored sunglasses.  A larger than life figure who never says or does anything until the end of the film, the industrialist proves an easy target for a deranged mind in desperate search of patterns.  Late in the film, Bone travels to the place Cutter is staying and finds him amidst a drift of papers. Buried in facts, Cutter desperately seeks those that feel right to him, those that feed his belief in conspiracy, those that provide the events of his life with some sort of context and allow for the possibility of a grand romantic gesture. The film ends with Cutter climbing aboard a white horse and riding it through a garden party, Jack Nitzsche’s brilliantly uncanny score soars but the gesture is nothing more than that… in a poignant moment, Bone shouts to his friend that he was right “It was him! It was him!” but his final commitment is too late, as Bone himself says to Cutter earlier in the film, it cannot make him whole again… nothing can do that.