There are some things that female directors do better than male directors and one of them is acknowledging the moral and psychological ambiguities inherent in the loss of sexual innocence.

Consider such mainstream accounts of adolescent sexuality as the Porky’s and American Pie series and you will find teenaged boys that are monuments to frustrated worldliness.  Endless fonts of libidinal energy, these teenagers know all the moves and all the rules but cannot find anyone with whom to put them into practice. In most films, males are either guileless children or frenetic satyrs, there is no middle ground and there is no real sense of psychological transition. Films that should describe a coming of age all too often opt for depicting an age of cumming. By contrast, films such as Lucille Hadzhihalilovic’s Innocence (2004), Katell Quillevere’s Love Like Poison (2010) and Celine Sciamma’s Water Lillies (2007) depict the loss of female innocence as a profoundly ambiguous process, a fall from grace into desire and a movement from protected freedom to vulnerable responsibility.

Cinema’s lack of engagement with the subtleties of male sexuality is also evident in a lot of gay independent cinema. ‘Coming out’ dramas such as The String (2009), Shank (2009) and even Tropical Malady (2004) focus less upon the emergence of homosexual desire than they do upon the process through which apparently straight men come to terms with the social pressures keeping them in the closet. One notable exception to this rule is Tom Holland’s sadly overlooked vampire film Fright Night (1985), in which a teenaged boy finds himself trapped between the sexual demands of his increasingly frustrated girlfriend and the siren’s call of the sexually ambiguous man-next-door. Nowadays, the equation of male sexuality with vampirism is a largely unquestioned part of the genre landscape given that both Buffy the Vampire Slayer and the Twilight books present adolescent males as dangerously libidinal creatures whose desires must be kept in check lest all hell break loose. This metaphorical Othering of male sexuality is particularly evident in Meyer’s Twilight series as the books feature a male vampire who effectively castrates himself in order to assume the role of an ersatz gay best friend. Once feared and desired in equal measure, the vampiric sexuality of adolescent boys is now house-broken for the purposes of romance, teenaged boys are now expected to sigh and to speak of love but never to demand a hand-job.

Half an hour into Craig Gillespie’s remake of Fright Night, a character expresses absolute outrage at the suggestion that he reads Twilight novels. This fragment of dialogue constitutes a statement of intent: Fright Night is not about dickless pretty-boys; it is about a male sexuality that is red in tooth and claw. A sexuality so terrifying in its primal nature that it even frightens the men afflicted by it.  Far more than a vampire movie or a horror-comedy, Gillespie’s Fright Night attempts to follow in the footsteps of Innocence and Love Like Poison by confronting received wisdom about the adolescent sexual experience. However, the more the movie deconstructs traditional depictions of adolescent male sexuality, the more it struggles to find an alternative to the frustrated satyrs of American Pie thereby begging the question: What is it like to be a teenaged boy?

The film begins by introducing us to Charley Brewster (Anton Yelchin). Charley is what can only be described as a recovering nerd in that his recent union with one of the hottest girls in school (Imogen Poots’ Amy) has catapulted him out of dorky obscurity and into the light of coolness and social acceptance. However, while Charley may dress like a cool kid and have the kind of girlfriend expected of a cool kid, he cannot get past the creeping suspicion that he is not actually all that cool. Naïve and insecure about his new-found social status, Charley lives in constant fear that people will find out about the time he spent making wrestling videos with Adam and Ed. Because of this insecurity, Charley has little choice but to agree when Ed (Christopher Mintz-Plasse) blackmails him into investigating Adam’s disappearance.

Firstly, Fright Night acknowledges the geeky nature of its fantastical elements. Indeed, when Ed reveals that a vampire killed Adam, Charley reacts not with scepticism but with scorn. Generally, narratives that hinge upon characters not accepting that they are in a genre piece rely upon the scientific impossibility of genre conceits. For example, Mulder cannot get official support for his UFO investigations because the government refuses to publically acknowledge the existence of aliens. Fright Night ably deconstructs this particular narrative move by making the refusal to accept genre-status a social rather than a philosophical problem. For example, Charley refuses to accept that a vampire killed Adam not because vampires do not exist but because vampires are geeky and acknowledging that vampires exist might suggest that Charley is a geek and Charley’s precarious social status means that he cannot afford to acknowledge his own geeky roots.

Secondly, Fright Night suggests that social status rests upon an assumption of sexual maturity. Thus, when Charley spends his time hanging out with other teenaged boys, he has no social status but when he hooks up with a sexually desirable girl, he suddenly acquires other sexually active friends. However, because Charley and Amy have yet to actually have sex, Charley’s social status is precarious and dependent upon maintaining the illusion that he and Amy have had sex.

Marti Noxon’s script neatly dovetails these two sources of social insecurity thereby suggesting that one can either be a geeky teenaged boy or a sexually mature man. Both Fright Night’s plot and its thematic infrastructure hinge upon the tension between these two modes of being and the fact that Charley is effectively trapped between modes.  The film explores this tension by presenting Charley with two very different role models. 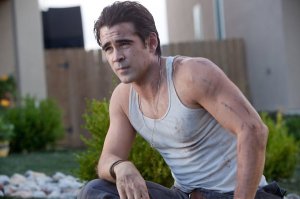 The first role model is Charley’s next-door-neighbour Jerry (Colin Farrell).  Jerry is handsome, mysterious and undeniably sexy.  Toned from working construction and individualistic by virtue of living on his own, Jerry exudes raw sexual magnetism and swaggers about the place bringing colour to the cheeks of both Amy and Charley’s mother Jane (Toni Collette). Jerry’s insouciant masculinity stands in stark contrast with Charley’s insecure obsession over status objects such as cool shoes and motorbikes. This contrast is so stark that Charley understandably treats Jerry’s presence as a threat to his status. The unspoken nature of this threat is beautifully demonstrated in a scene where Amy tries to seduce Charley only for Charley to remain distractedly fixated upon Jerry. Charley is obsessed with Jerry because the vampire combines two of Charley’s greatest social fears: The fact that he is not yet a ‘real man’ and the fact that he is, beneath it all, an enormous geek. The fact that Charley could solve his social and sexual problems by fucking Amy simply does not occur to him, his obsession with sexual maturity is limited to a fetishistic obsession with the outward manifestations of adult male sexuality. Which brings us to Charley’s second role model. 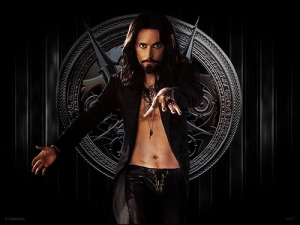 Charley’s second role model is the Las Vegas stage magician Peter Vincent (David Tennant). Vincent’s allure as a role model derives from the fact that his website boasts of his prowess as a vampire hunter, thereby suggesting the possibility of reconciling adult sexuality with geeky interests. Desperate to be rid of Jerry, Charley bluffs his way into a meeting with Vincent and discovers him to be an imposing leather-clad sensualist whose knowledge of the occult is rivalled only by his power over the bevvy of beautiful women who work for him. However, the more time Charley spends with Vincent, the more Vincent’s image begins to fray at the edges. Far from being a human version of the swaggering Jerry, Vincent is actually a geek pretending to be a grown man: his leather trousers give him a rash, his flowing dark hair is a wig, his vampire-killing tools are just for show and his beautiful assistant loudly bemoans his sexual incompetence. It transpires that, much like Charley, Vincent is stuck in a state of arrested development that prioritises the outward trappings of male adult sexuality over actually having sex. Much like the content of his magic act, Vincent’s sexual magnetism is nothing but illusion and bullshit.

The difference between Jerry and Vincent is most evident in their choice of homes.  When Charley sneaks into Jerry’s house he finds it to be largely empty. Initially unaware that he is being observed, Jerry swaggers about the house and settles down to watch a TV programme seemingly composed of nothing but women talking about breast augmentation (“boobies… boobies…”) and lingerie. Conversely, Vincent lives in a gothic penthouse filled with phallic imagery and semi-naked women. While Vincent’s elaborate collection of props raises status fetishism to the status of performance art, the stripped down nature of Jerry’s existence renders his absolute authenticity is somewhat ambiguous terms. Yes, Jerry is true to himself and more-or-less honest about what he is but his entire being is consumed by his sexuality, he literally has no life beyond the hunt. The choice between Jerry and Vincent is therefore revealed to be almost universally unappealing: Charley can either become a man and surrender his geeky internal life, or externalise his geeky inner life and become a parody of masculinity. By characterising the movement from adolescence to adult masculinity as a choice between two equally unappealing role models, Fright Night presents the coming of age process in terms that are both ambivalent and somewhat surprising.

By placing questions of authenticity at the centre of the coming-of-age process, Fright Night is effectively suggesting that all teenaged boys are in the closet until they learn to accept what they are. Indeed, while this narrative of self-acceptance makes perfect sense in the context of a film concerned with adolescent homosexuality (as in Holland’s Fright Night and pretty much every gay indie film ever made), it is profoundly unusual in a film about growing up as a straight middle-class teenaged boy. In effect, Fright Night challenges mainstream cinematic accounts of what it feels like to be a teenaged boy but, having deconstructed these mainstream accounts, the film then struggles for an alternative forcing it to borrow from GLBT coming-of-age narratives. This means that, according to Fright Night, the queer experience is now the cultural default.

Fright Night’s assumption that all men grow up in the closet is, alongside the suggestion that geeks never have sex, problematic to say the least. Indeed, what makes Fright Night such a fascinating film is not its capacity to reveal truths about the human condition but rather its repeated failure to do so. By presenting geekdom as a stage that one naturally grows out of, Fright Night is presenting a set of social attitudes that are decided long in the tooth and completely out of synch with the growing economic and social power of activities and interests previously considered far too geeky for the mainstream. As Hollywood studios fall over each other to adapt comic books for the silver screen and serious dramas retreat from both prime time television and large-scale cinematic release, geekdom is increasingly becoming the norm for Western adults. Fright Night’s confusion as to what constitutes an acceptable ‘adult’ persona extends to its account of male sexuality in that the experience of straight men is now assumed to be identical to that of male-identifying GLBTs.  By confusion the mainstream with the marginal and the queer with the straight, Fright Night communicates a profound cultural uncertainty about maturity; what does it mean to be a grown-up? What does it mean to be a man? According to Fright Night, we are nowhere near to having clear answers to either of these questions.