In 1963, the Swedish director Ingmar Bergman concluded what has become known as the Trilogy of Faith.  Prior to this trilogy, many of Bergman’s films tended to revolve around questions of religion and faith as their characters struggled to find meaning in the meaningless void of life.  Paradoxically, the Trilogy of Faith marked a departure in Bergman’s filmmaking as it displayed an interest not in God but in people. In Through a Glass Darkly (1961) and Winter Light (1962), Bergman explored the roots of religious faith and how that faith might be lost.  In The Silence (1963), Bergman examined a world characterised only by absence; absence of God, absence of faith and absence of speech.  As Bergman himself put it:

What Bergman found when he stripped away God and faith was a world of passion and turmoil, a world in which nobody speaks but everyone yearns.  The Silence is a remarkable film in that it manages to be both intensely psychological and almost entirely free of dialogue. Helene Cattet and Bruno Forzani’s Amer marks a return to Bergman’s silent realm of desire, passion, alienation and horror.

Amer is made up of three short films sharing a character.  The character in question is Ana. 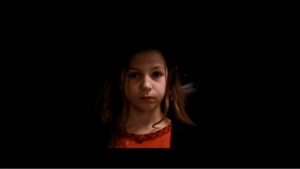 When we first meet Ana (Cassandra Foret) she has recently moved into the house of a dead grandparent. While you might expect such a traumatic experience to bring the family together, Ana finds herself ignored by parents utterly consumed by hysterical grief and anger.  The focus for all of this hysteria is not Ana, or the corpse of her grandparent but the black-veiled figure who once served as the grandparent’s carer.  Left largely to her own devices, Ana creeps about the house peeking through key holes and struggling to make sense of what is going on around her.

Stripped of all but a few scattered fragments of dialogue, Amer is a film that relies upon cinematography and its score to tell a story. The film begins with lots of shots of eyes and keyholes accompanied by muffled dialogue and the sound of slamming doors.  The repeated use of close-ups of human faces creates a pressing sense of claustrophobia while the slamming doors and images of keyholes slowly tease that claustrophobia into outright paranoia.  As Ana is the character most frequently seen, we tend to identify with her and so we find ourselves projected into the mind of a young girl who knows that something is wrong but cannot quite articulate what the source of that wrongness might be.

When Ana creeps into the room where her dead grandparent is kept, she uses a crucifix to pry open the corpse’s fingers and steal his watch.  Once this happens, the film moves from weird to downright insane as Ana comes to be haunted by ghostly sounds and strange presences while the lighting veers between intense blocks of colour.  The film’s use of colour is fascinating as Cattet and Forzani somehow manage to layer the colours in quite subtle ways.  For example, rooms will appear red while faces and eyes will glow blue and keyholes pulsate with green light.  This use of colour serves to break up the film’s internal spaces, separating different elements from each other with starting effect: Ana is blue and she is separate from the red room while both are separate from whatever it is that is outside the door.

This clever use of colour is reminiscent of the vast blocks of psychedelic primary colours that feature in Dario Argento’s Suspiria (1977). This technique also features in a number of Cattet and Forzani’s short films such as Chambre Jaune (2002), which are included on the Amer DVD.  Another technique pioneered in the short films and re-used in Amer is to present the films’ antagonists as nothing more than faceless black figures. By stripping the antagonists of human features, Cattet and Forzani are transforming them into blank slates that acquire horrific characteristics because we choose to project those characteristics onto them.

The position of antagonist as psychological sponge is particularly obvious in Amer’s opening vignette as the grandparent’s faceless carer is nothing more than an embodiment of the mother’s fear and guilt; guilt over the fact that she was not there when her father died and fear of her father’s continued psychological presence in her life.  When the mother screams that the carer needs to go and that she no longer serves any purpose, she might as well be talking about her attachment to her father.  Somewhat tellingly, Ana only runs afoul the black figure when she tries to steal her grandfather’s watch.  Then, the carer appears and attacks the child before the mother intervenes and reclaims the watch for herself.  As with the blacked-out antagonist, the watch is only significant in so far as we choose to project out own concerns onto it.  Does the watch represent adulthood? Sexuality? Guilt? Knowledge? Wealth? Yes and no… it is a free-floating signifier that means both everything and nothing.

The film’s second vignette returns to the house a number of years later.  Now, Ana (Charlotte Eugene Guibeaud) is an adolescent on the cusp of womanhood.  Again, the camera returns to shots of Ana’s eyes and skin recreating the first vignette’s isolation and claustrophobia.  However, rather than juxtaposing these images with pictures of keyholes and darkened corridors, Cattet and Forzani intercut them with images of sun-drenched coastline and perspiration. Clearly, the younger Ana’s paranoid isolation has been replaced with an isolation born of sexual frustration.  As ants crawl across Ana’s naked flesh and buttons hang open to reveal flashes of underwear, it is clear that Ana is ready to pop. Preventing Ana from popping is her mother, an authoritarian figure who ensures that Ana wears a hat.  This gesture of maternal concern reeks of psychological dominance, by forcing Ana to wear a sun hat, the mother is transforming Ana into a distorted reflection of herself.  A reflection that makes her look much more attractive when the pair venture into town. Ana’s subordinate role is further reinforced when the mother punished and humiliates Ana for daring to run down a passage-way after an alluring boy.  Clearly, only the mother is allowed a sexual identity. 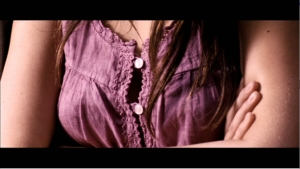 The film’s final vignette links the two previous vignettes together by introducing us to an older Ana (Marie Bos) who returns to the family house to find it run down and dilapidated. This return to the house is psychologically significant as the older Ana is depicted as a strange amalgamation of the paranoid young Ana, the frustrated teenaged Ana and the domineering figure of the mother who, in both the first and the second vignette, appears as a figure initiated into all of life’s secrets whether that be death (as in the first vignette) or sex (as in the second).  As in the first vignette, Ana’s presence in the house is strangely overshadowed by the presence of a series of darkened and symbolic figures.  At first, the figure is feminine and intent upon punishing Ana for making herself at home in the house.  Then, the figure becomes masculine and far more protean as an embodiment of Ana’s sexual desire, her fear of the house and of the madness stirred within her by a return to the house.

By blurring the boundaries between Ana, her mother and their blacked-out antagonists, Amer is setting out its stall as a film concerned with the self-destructive nature of desire.  The blacked-out antagonists summoned by guilt and death as well as by sexual frustration represent the bottomless and undifferentiated power of the libido. An undifferentiated power explicitly denied by Freud in Civilization and its Discontents (1930) on the grounds that he saw the libido as something that manifested as both a death drive and a sex drive.  Amer denies this distinction and uses the blacked-out figures to run both sets of desires into one.  For Cattet and Forzani, the desire to kill and the desire for sexual release come from exactly the same place. By choosing to explore all of these ideas in mostly visual terms, Amer’s directors are also making a wider point about the film’s genre precursors.

From its fading 1950s décor to the Italian setting and its dream-like iconography, Amer is a film that visibly takes its cues from the Giallo.  Largely eclipsed by their American descendants the Slasher pictures, the Gialli constituted a literary and cinematic sub-genre that borrowed from the thriller, the crime story and the gothic to produce something that was both typically Italian and completely unique.  While many Gialli were made during the 60s and 70s heyday of Italian exploitation cinema, the Gialli that have remained in popular memory such as Mario Bava’s The Girl Who Knew Too Much (1963), Dario Argento’s The Bird with the Crystal Plumage (1970), Lucio Fulci’s Lizard in a Woman’s Skin (1971) and Also Lado’s Who Saw Her Die? (1972) tended to combine traditional genre elements with a psychedelic visual style and an atmosphere of complete sexual hysteria.

By taking the traditional Giallo and stripping away character, plot and dialogue, Helene Cattet and Bruno Forzani are effectively presenting us reduction of the genre.  Amer takes the Giallo formula and boils it down till there is nothing left but a thick black paste, a paste that constitutes a sort of Ur-Giallo, an essence of Italian Horror. Amer suggests that, beneath the misdirection and the individuating details, the Gialli were films all about the self-destructive and masochistic nature of desire. That Cattet and Forzani should make such a claim speaks of their intelligence, that they choose to make such a claim through the medium of film speaks of their creative virtuosity.  Amer is one of the most unique films I have ever seen… it is truly brilliant.