Back in 2003, Lionel Shriver published the Orange award-winning novel We Need to Talk About Kevin. Taking the form of a series of letters, the book chronicles a mother’s attempt to come to terms with the extent of her responsibility in the creation of a monster. The novel’s epistolary structure means that adapting it for the cinema was always going to horrify the book’s ever-growing legion of fans but a ripple of excitement passed through cinephilia when the news began to spread that a film had been produced and that it marked the long-overdue return of Scotland’s Lynne Ramsay, a director whose earlier films Morvern Callar (2002) and Ratcatcher (1998) demonstrated a real gift for tackling darker themes with a decidedly poetic sensibility. We Need to Talk About Kevin is not only a successful adaptation of a great novel, it also heralds the return of a director who has been absent from our screens for far too long.  We Need to Talk About Kevin is nothing short of breath taking. 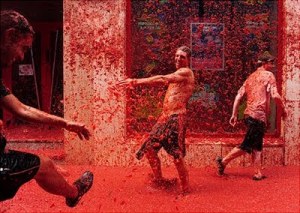 The film opens with a puzzling image; Filmed from above, a crowd of people jostle this way and that.  Clearly happy but clearly crowded together, the figures writhe beneath our collective gaze, obscuring both the floor and whatever it is that they are there to see.  As the jostling continues, an unexpectedly vivid red obscures the pinkness of the flesh.  The two colours blur together as bodies vibrate and move.  Is this some bloodbath?  Slowly, we realise that the red is not blood but tomato. Amidst so many crushed tomatoes is the smiling visage of Eva Khatchadourian (Tilda Swinton), an award-winning travel writer and explorer who has flown from her New York home to attend this exotic festival of tomato squashing.  At times, she seems happy to be there and at times she seems positively ecstatic but there are also times when she seems terribly old and terribly tired. Throughout the film, Eva keeps returning us to this scene and its striking ambiguity forms an atmospheric bassline for the film: A taint of vermillion, emotional ambiguity and the press of too many bodies and too many people.

We Need To Talk About Kevin’s narrative is distributed across a series of different timeframes.  Sometimes we see Eva struggling to raise Kevin from ill-tempered baby to wilfully-perverse child, other times we see Eva trying to forge a decent relationship with teenaged Kevin (Ezra Miller) and then we see Eva trying to put her life back together in the aftermath of some terrible event that stripped her of her family and her home whilst leaving her an unemployable social outcast and figure of hatred for much of the local community. By allowing the different timeframes to slowly spool forward, Ramsay reveals more and more about Kevin and Eva’s relationship as well as Kevin’s true nature.

Right from the off, Kevin is a complete pain in the arse.  Beloved of his dull-witted father Franklin (John C. Reilly), Kevin is an ill-tempered baby who simply will not stop crying.  Given that Eva is evidently a high-powered career woman who loves her job, there is an initial suggestion that Kevin’s ill-tempered nature may simply be a reflection of Eva’s discontent at being forced to become a stay-at-home mother.  Indeed, when it becomes necessary for the couple to move from New York to a much smaller town, Eva resents not only her husband but also her permanently-screaming son.

From there, we learn that the ill-tempered baby grew into an ill-tempered little boy who refuses to be potty trained, forcing his mother to deal with the increasingly large turds of a growing boy who can walk, talk and seemingly despise his own mother.  In a wonderful scene, Eva papers the walls of her office with maps as both a sanctum and a shrine to the life that motherhood forced her to abandon.  Standing in the doorway and glowering at his mother as she radiates contentment and satisfaction, Kevin asks what she is doing and responds by vandalising the room.  On the one hand, this is just a random act of perversity and sadism but the target of Kevin’s violence also speaks to the nature of his relationship with his mother. 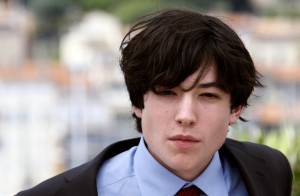 Having established Kevin as a thoroughly unpleasant child, Ramsay begins to pull back the curtain on Kevin by making it clear that his perversity and sadism are aimed solely at his mother.  Indeed, whenever Franklin gets home, Kevin assumes the form of an exceptionally smiley and happy child. Kevin’s protean appearance not only serves to drive a wedge between Eva and Franklin, it also makes it abundantly clear that Kevin is not just a shitty kid… he is a shitty kid who can behave beautifully whenever it suits him.  Initially, Eva takes this personally and assumes that Kevin simply does not like her but a more subtle truth begins to emerge when Kevin gets sick.

In another beautiful scene, the poorly Kevin pukes on the floor, forcing his long-suffering mother to clean it up.  However, as Eva rises and prepares to exit the room, Kevin calls her back and asks for a story.  It turns out that, when Kevin is ill, the person he turns to for comfort is not his father but his mother, the very woman he mistreats and humiliates at every possible opportunity. Needless to say, once the virus passes through, Kevin is back to his old self and Eva is again frozen out.  Eva interprets this interlude as a rare manifestation of the ‘real’ Kevin and I think that she is absolutely right but the truth this scene reveals about Kevin is not that there is some ‘good kid’ lurking beneath the surface but rather that his connection to his mother is so strong that he feels able to show her his real face.  A face he never shows to his father.

Kevin is a psychopath.  He is a cold-eyed, sadistic killer but he also has an intense bond with his mother.  This bond manifests itself as absolute hostility and rage because this is the real Kevin.  Franklin never sees this side of Kevin’s personality because Kevin has no bond with Franklin, he just uses him as an opportunity to test out the persona that will allow him to hide his true nature from other people. Kevin appears nice to his mother while sick because he is ill and in pain.  He is literally not himself.  However, despite the similarities between ill Kevin and fake Kevin, ill Kevin chooses to spend time with his mother rather than his father because it is only Eva who is allowed to see him with his defences down. 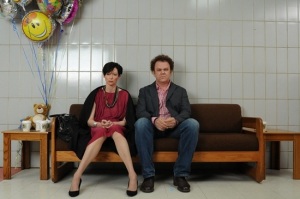 As Ramsay lays out the incredibly intimate nature of Kevin’s relationship with his mother, she slowly raises the issue of Eva’s guilt in the creation of a person like Kevin.  Ramsay illustrates Eva’s feelings of guilt through repeated use of the colour red.  When a woman slaps Eva for being Kevin’s mother, Eva sees red.  When Eva is struggling with her outcast status her car and house are repeatedly splashed with red paint. These dashes of colour not only serve to highlight (in an admittedly crude manner) Eva’s culpability, but also to return us again and again to the film’s opening scene in which a younger Eva joyously dances amidst crushed tomatoes. If the vermillion hue of Eva’s guilt flows from that moment in the crowd, then why is she happy in those scenes? Why are her feelings of guilt associated with moments of hedonistic escape and revelling?

The truth is suggested in a number of blink-and-you’ll-miss them visual tricks.  At one point, a haggard Eva stumbles out of bed and sticks her face in a bath of cold water.  As her face dips below the water and stares at the camera, we realise that the face we are looking at is not that of Tilda Swinton but of Ezra Miller.  This suggests that, in some sense, Kevin and Eva are the same person. A suggestion that is picked up repeatedly throughout the film by having the hairstyles of Miller and Swinton intersect at different points in time as though both Kevin and Eva were getting their hair cut in order to look like one another only to be jolted out of the madness in order to reclaim both their individuality and their distinctness.

One of the more intriguing questions that can be posed of Ramsay’s film is the extent to which what we are shown is coloured by Eva’s perspective.  Shriver’s book is written not only in the first-person but also as a series of impassioned letters, suggesting that the events of the book are very much a representation of Eva’s reaction to and memory of (unseen) real world events.  It is just as possible that Kevin’s initial savagery is exaggerated as it is that Eva played a direct role in distorting the child’s personality through a precisely the sort of spiteful and sadistic acts that Kevin unleashes on Eva. The film raises this possibility by having Kevin be covered in all kinds of scars.  These scars are largely unexplained and we naturally assume that they are the product of Kevin’s violent behaviour but when the film does bother to explain a scar on Kevin’s arm it places the blame quite directly on Eva.  Idly scratching his scar, the teenaged Kevin comments that it was the most honest thing that Eva had ever given him. This raises the question of whether the honesty lies in the violence of Eva’s act or in her begrudging recognition that she did hit her child and that she did have a very real effect upon him.  Seen in this light, Kevin’s scars are not the result of his violent tendencies but a subtle hint of Eva’s true approach to parenting.

If we see Kevin as a manifestation of Eva’s rage and frustration, then the emotional ambiguity of the tomato scene begins to make a lot more sense as the guilt that Eva feels over Kevin’s actions is not the guilt of a passive innocent but of an active participant… a woman who regrets neither her violence nor her resentment and who enjoyed her flashes of violence and rage but who also feels bad for the people that her rage destroyed.

The film ends with Eva hugging Kevin and Ramsay plays it as the very peak of a dramatic arc. Upon initial viewing, this treatment is somewhat bizarre as, prior to that moment, Eva’s attitude towards Kevin had been one of hatred and resentment while the film’s centre of gravity suggested that the main arc would peak when Kevin committed his first murder.  However, by stressing the dramatic importance of Kevin and Eva’s reconciliation, Ramsay is suggesting that the real heart of the matter is not whether or not Kevin will become a monster but whether Eva can ever come to terms with her own twisted love for the monster that she created out of the rage and frustration she felt from a life spent tied to a dull-witted husband instead of exploring the world. Eva’s rage is the rage of every woman who was expected to produce a son, of every woman who died in childbirth and of every woman who was forced to give up her dreams in order to do what was expected of her as a woman. Kevin is not just a monster but a monster created as an instrument of vengeance and the emotional heart of this story lies in Eva’s ability to accept both her anger and her need for revenge.

We Need to Talk About Kevin is a complex story that is beautifully told by a director of rare visual style and a cast working at the very peak of their game.  I will be surprised if I see many better films than this in 2011.