Film critics sometimes talk about films having a ‘Malick Aesthetic’.  What they generally mean by this is that the film features lots of nature photography such as the fields of long grass rippling in the wind from The Thin Red Line (1998), the sunlight in the trees from The New World (2005) or the desert sunsets from Badlands (1973). The ‘Malick Aesthetic’ is created by inserting this sort of footage in between more eventful scenes both as a way of allowing the audience to reflect upon what they have just seen and as a way of creating an impression of the numinous that both surrounds and consumes the characters. Michelangelo Frammartino’s Le Quattro Volte is a film that makes extensive use of this technique to create a film that is both free of dialogue and positively overflowing with the same sense of grace that infuses many of Malick’s most enduring films. However, unlike films such as Carlos Reygadas’ Silent Light (2007), Frammartino is not content with presenting us a world imbued with the divine. Instead, much like Malick himself, Frammartino interrogates the divine resulting in a film filled with wit, warmth and wonder, but also profound scepticism about the divine spark that supposedly surrounds us.

Le Quattro Volte opens with a mesmerising shot of a smouldering woodpile.  Carefully constructed by local artisans so as to burn evenly and leave behind a mountain of charcoal, the half-consumed woodpile is a vast black dome dotted with holes from which smoke billows before it is taken by the wind and shaped into an array of intricate patterns. The shot is arresting, but it also sets the film’s terms of engagement: there is a cycle to everything and this cycle is governed by immutable physical laws that create beauty as easily as they destroy it. While we may look for the hand of God in the swirls of smoke, all we ever see is the touch of man and the grinding cycle of a self-perpetuating cycle of creation and destruction.  These terms set, the film moves on to the second of its vignettes.

The second vignette features an ageing goatherd.  Coughing and wheezing in a way that makes it clear that his days are numbered, the old man spends his few remaining days in exactly the same way: sweeping up after goats, tending goats, walking goats up a hill and drinking a concoction made from holy water and dust taken from a church. This set of rituals form a system and the system imbues the old man’s life with meaning. When the old man loses his envelope of church-dust the system wobbles and the old man dies.  Entropy claims him and the goats escape until a younger man takes over his duties and the system lurches back into motion. 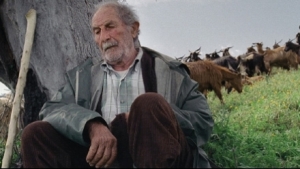 As with the move from the first to the second vignette, the move from the second to the third vignette is navigated via a black screen.  This time, when the picture returns, we are met with the jarring image of a goat giving birth.  We then follow this small white kid as it learns to stand, learns to walk and learns the ways of the herd before getting lost in the wilderness as a result of falling into a ditch.  As with the old man, the system breaks down and we move from the goat to the tree under which is huddles for warmth.

The fourth vignette shows the population of the local village as they ritualistically cut down the tree and drag it back to town.  Stripping off the bark, the villagers ‘plant’ the tree in the market square as someone climbs to the top of it and ceremoniously reclaims a balloon.  Its purpose served, the tree is dismantled, cut to pieces and delivered to a yard where local men use the trunks to assemble a woodpile that will soon be consumed and transformed into charcoal. The final shot of the film is of a small truck delivering charcoal to the village as smoke billows from a chimney pot from where it will re-enter the water cycle and aid in the creation of trees, goats, goatherds, woodpiles and charcoal.

In a wonderful piece for Sight & Sound magazine, Jonathan Romney quotes Frammartino’s suggestion that Le Quattro Volte is about animism and the transmigration of souls:

“The film is based on the ideas of animism and reincarnation, and Calabria is very much a animist region. Pythagoras supposedly said that each of us holds within us four successive lives, each one enmeshed in the others. Man is made of mineral, because he has a skeleton; he’s a plant because he has blood flowing through his veins like sap; he’s an animal, because he has morbidity; and he’s also a rational being. So in order to understand himself, man has to understand himself four times’” – Sight & Sound Vol 21, Issue 6, pp. 44

This is undeniably a sophisticated and intriguing critical framework through which to explore the film’s images and themes but it is not the only way of approaching what is on the screen.  Indeed, while Frammartino drives us from vignette to vignette and from image to image like so many goats, he does so without the use of any dialogue or exposition.  This means that, in order for its meaning to ‘get across’, Le Quattro Volte is reliant upon Frammartino’s placement of images and the willingness of the audience to meet him half way by looking at the images on the screen and imposing the ‘correct’ critical framework upon the various interlocking systems he portrays. However, like the little goat that gets lost in the forest, it is all too easy for the directorial goatherd to lose some of his flock because, at the end of the day, not all of us see the same things when we look at the world.

Had failed to appreciate the real source of religiosity. This was a particular feeling of which he himself was never free, which he had found confirmed by many others and which he assumed was shared by millions, a feeling that he was inclined to call a sense of ‘eternity’, a feeling of something limitless, unbounded —  as it were ‘oceanic’. – Pp. 3

This feeling of being, as Freud puts it, “indissolubly bound up with and belonging to the whole of the world outside oneself” is clearly the same feeling that Frammartino is seeking to recreate by driving his audience through a series of interlinking systems.  The point of Le Quattro Volte is that, for the goatherd, the goat, the tree and the woodpile, life has meaning because their lives (such as they are) take place within a system and each system itself has a place in another system. This system of systems, this interwoven lattice of meaning and place is like an ocean and this ocean of meaning is what Freud’s correspondent sees as the source of all religious thought and sentiment. 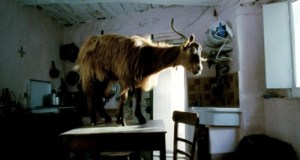 However, much like Freud himself, I see all of these systems and yet I do not see meaning.  I do not see an oceanic sense of belonging in the change of the seasons or the death and rebirth of a goat.  I see vast impersonal systems, but I do not see any divine spark. I see entropy.  I see wastage.  I see the cruelty of a small goat left to die from exposure. I see the madness of an old man drinking church dust in order to stay alive.  I see a system of systems that creates beauty by chance only to then destroy it with complete indifference. The fact that two audience members can look at the vignettes that make up Le Quattro Volte and take away two completely different experiences is part of what makes this film so interesting.  Le Quattro Volte is not merely a film about the pantheistic divinity of nature, it is also a film about our desperate need to see our lives as meaningful.  Even when they are not.  This tension is beautifully explored in a spectacular coup-de-theatre. 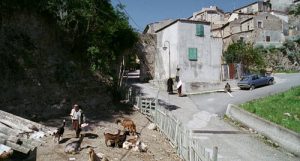 Halfway through Le Quattro Volte, there is a sequence in which a load of Roman soldiers turn up on the back of a truck.  Weirdly post-apocalyptic, the scene becomes all the more surreal when the Romans reappear minutes later at the front of a procession that features a man carrying a giant crucifix. After warding off the goatherd’s dog, the soldiers march down the hill.  A few moments later, a villager comes running out and tries to catch up with the procession only to be cornered by the dog.  At first, the villager tries to move around the dog but then he starts chucking stones in an effort to distract the dog’s attention. After a few tries, this plan succeeds but rather than picking up one of the stones thrown by the villager, the dog picks up the rock that held the Romans’ truck in place.  Suddenly lacking anything to stop it from rolling down the hill, the truck rolls backwards and crashes through a fence.  With impeccable comic timing, the camera pans down the hill to follow the rushing villager only to pan back up the hill to reveal that the goats have escaped their enclosure.  Exceptionally funny, beautifully conceived and flawlessly executed, this sight gag brilliantly links up with the film’s wider exploration of the spiritual impulse.

While it is possible to watch this sight gag and enjoy it on a purely comedic level, it is difficult not to marvel at the skill with which the scene is composed. Romney’s piece reveals that the sight gag was painstakingly story-boarded and involved the use of a number of goat-wranglers and a highly trained performing dog. In addition to this, Frammartino spent most of the day on the phone to his producer who knew how much of the film’s wider appeal relied upon Frammartino’s capacity to nail the scene.

For an atheist such as myself, watching this scene unfold is as close as I will ever get to seeing the world through the eyes of a believer.  While the events onscreen are presented as random and unplanned, I know not only that they were painstakingly story-boarded but also that the presence of the scene in the film was absolutely central to Frammartino’s capacity to secure the funding that allowed him to get the film made. I look at this sequence and I see meaning, intent and purpose as well as beauty and that is what believers see when they look at the world around them.

The fact that this sequence pops up in the middle of a film that painstakingly recreates that oceanic numinous sense of belonging suggests that there is more going on in Le Quattro Volte than simple spirituality.  Le Quattro Volte is an examination of the ways in which religious people see the world. It examines this mode of cognition both by seeking to recreate it in a cinematic form and by deconstructing it by making clear how difficult it is to disentangle from the sort of suspension of disbelief required to accept a sight gag as a spontaneously comic occurrence. Is religion simply a form of highly evolved self-delusion? Le Quattro Volte certainly raises that possibility.