Let me begin with a bit of history: until the arrival of the locomotive, the western half of the American continent was criss-crossed by a number of emigrant trails designed to help Americans immigrate to such emerging western territories as California. Arguably the most famous of these trails was the Oregon Trail, a 2000-mile route that linked the Missouri River to valleys in what we now think of as the state of Oregon. In its heyday between 1846 and the completion of the first transcontinental railroad in 1869, the Oregon Trail conducted over 400,000 Americans to the west of the continent. It was through this steady flow of farmers, miners, ranchers and normal people that the West was truly won.

Kelly Reichardt’s film Meek’s Cutoff tells the (reportedly true) story of what happened when one group of settlers – lead by the famous explorer Stephen Meek – attempted to find a safer route to Oregon that might bypass some dangerous Indian land. Slow-paced and enigmatically shot, Reichardt’s film reveals both an emptiness at the heart of the American dream and the dangers of what can happen when being a man is mistaken for being a leader. 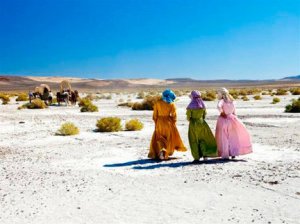 The tone for the piece is set in an early scene as colourfully clothed women dutifully trudge alongside covered wagons against a background of dust and endlessly rolling plains. Chris Blauvelt’s cinematography sits ambivalently in the middle distance; our eyes are drawn again and again to these colourful flowers of civilisation and yet, against the oppressive and yet beautiful bleakness of the background, we are loathed to approach the settlers, knowing full well the taint that their ‘civilising’ influence represents. The families move across the plains under the leadership of the rambunctious Meek (Bruce Greenwood) but what was supposed to be a two-week detour has now turned into a five-week odyssey and, as water and supplies begin to disappear, the settlers are starting to ask questions both of Meek’s competence and his intentions. One of the settlers says it best when he carves a single word on a dried out tree stump: ‘Lost’.

While Blauvelt’s cinematrography stresses the incongruous nature of humanity’s presence in the great emptiness of the plains, Reichardt establishes Meek as an intermediary between the settlers and the world. Clad in buckskin and a mane of hair and beard, Meek looks every inch the frontiersman and yet he does not seem to know where he is going or where he is. Indeed, while Meek may well look the part, his judgement as to where the party should be heading seems to be no better than that of the settlers themselves. As their fears grow, the men in the party begin to speculate as to Meek’s intentions: Is he simply lost or is he leading them into some ambush? While the menfolk excite themselves with paranoid speculation, Reichardt drags our attention back to the female settlers. Meek talks the talk while the menfolk fret but it is the female settlers that actually keep the party alive. 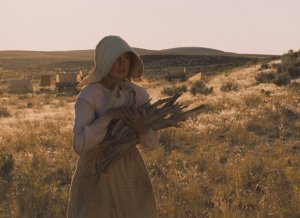 It is easy to read Meek’s Cutoff as a sort of political allegory for the Bush era. Lost in the postmodern wilderness, the American people turned to a cowboy-type figure for leadership only to discover that he had no better idea as to where they were headed than they did. Indeed, much like the Bush regime, Meek responds to any attempt to question his authority with a series of increasingly dark fantasies about what might happen if people fail to do as he say, “Hell is full of bears” Meek utters gnomically after terrorising the group with the story of a man who lost his scalp to a ravening beast. 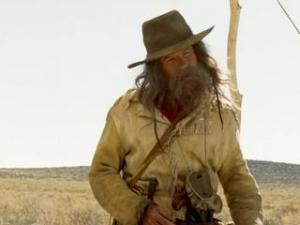 While its lack of dialogue, long takes and bleak landscapes may situate Meek’s Cutoff in the great romantic art house tradition of films about isolated individuals wandering through a disenchanted world devoid of meaning and purpose, Meek’s Cutoff is not so much a film about being lost as it is a film about community. Having questioned Meek’s competence as well as the party’s trust in his leadership, Reichardt sets about exploring how the party, having moved beyond Meek’s leadership, decides upon which direction to take.

After a while, the party crosses paths with a Native American (Rod Rondeaux).  Fearing that he may be scouting on behalf of an unseen Cayuse war party, Meek and one of the men capture him and drag him back to the camp.  Meek predictably suggests that they kill him immediately lest he warn his people but the settlers, by now wary of Meek’s paranoia, decide to use him as a guide. After all… he must come from somewhere and, chances are, he knows where they might be able to find water. His loyalty apparently purchased with an old blanket, the party set the Indian loose and begin to follow him. However, rather than leading them either to water or his village, the Indian simply walks further and further into the wilderness as the settlers begin to suspect that he may be either lost, mad or leading them into an ambush. 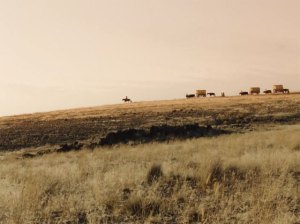 Initially, there is a touch of the ‘Magical Negro’ about the Native American as he emerges almost organically from the landscape as his greater knowledge of the local area is held aloft as a possible solution to the party’s problems. Reichardt encourages us to share this view with the settlers by stressing the fact that he neither speaks nor understands English. There are even a number of shots in which he seems to almost disappear into the background and his fondness for carving indecipherable runes on rocks along the way similarly fosters the sense that he is somehow ‘of the land’ in a way that neither Meek nor the settlers could ever hope to be. However, when considered in the wider context of the party’s quest for effective leadership, the Magical Indian reveals himself to anything but magical.

How can you buy or sell the sky? The land? The idea is strange to us…. Every part of this earth is sacred to my people. Every shining pine needle, every sandy shore, every mist in the dark woods, every meadow, every humming insect. All are holy in the memory and experience of my people…. Will you teach your children what we have taught our children? That the earth is our mother? What befalls the earth befalls all the sons of earth. This we know: the earth does not belong to man, man belongs to the earth.

The problem is that these beautiful words were not devised by Seattle but by an American screenwriter named Ted Perry who had extensively updated a transcription of the speech that has since been revealed to be historically dubious to say the least. However, despite Perry repeatedly trying to set the record straight, the image of the environmental Indian has remained lodged in the American psyche in such a way that, like Reichardt’s settlers, many American environmentalists continue to suggest that America should follow the teachings of its native population. However, the archaeological record suggests that, prior to the white man’s arrival, Native Americans were no more or less environmentally aware than any other racial group suggesting that the Environmental Indian is actually just as much a product of racism as the Magical Negro.

Reichardt’s Indian is placed at the head of the party and is expected to lead but, upon being handed the reigns of command, he reveals himself to be just as lost and aimless as the rest of the party.  The point that Reichardt is trying to make is that there is nothing to be gained from trying to follow prophets as all humans are equally lost and equally directionless.

Meek’s Cutoff reveals a history of America based neither in great historical and spiritual journeys, nor in the chaos and destruction of the Old West. For Recihardt, America was forged in small communities dominated by women who lived day to day and somehow muddled through. History lies not in great leadership and conflict but in a cloak of silence punctured only by the sound of people living their lives, feeding their children, and making their bread. Life is not about battle but about survival… history is the fruit of humanity’s capacity to keep death from the door and nothing else.