Biographies are interestingly false.  Drawing on collections of facts about a person’s life, they attempt to present these facts as being in some way related to each other.  First one thing happens, and then another thing happens.  The audience is invited to infer either that the first thing caused the second thing or that both things are expressions of unseen psychological law.  A character trait.  An obsession.  A neurosis.  A fleeting moment of psychotic anger.  But this is to assume that the facts of our lives are connected in meaningful ways and that there are fixed patterns to our psychological states that govern our actions in a predictable and rational manner.

This is rather a large assumption to make.

The philosopher David Hume expressed a degree of scepticism about the idea of the self as a thing with fixed characteristics.  According to the traditional reading of Hume, the self is a series of perceptions that are bundled together by coherence and consistency.  One interpretation of this is that we are our own biographers and that by choosing to place discrete events and moments of our lives in a series of imagined causal relations, we are fashioning a narrative and thereby fashioning an identity for ourselves. Our continued existence is a myth.  And yet…

The philosopher Derek Parfit, himself an intellectual descendent of Hume, argues that while it does not make sense to say that we are a single person who exists through time, there is a degree of psychological connection between the different selves that make up this illusory person. The key to psychological connection, according to Parfit is memory.  The physicist David Deutsch explains the physics of behind this idea in his book The Fabric of Reality (1997):

We exist in multiples versions, in universes called ‘moments’.  Each version of us is not directly aware of the others, but has evidence of their existence because physical law links the contents of different universes.  It is tempting to suppose that the moment of which we are aware is the only real one, or is at least a little more real than the others.  But that is just solipsism.  All moments are physically real.  The whole of the multiverse is physically real.  Nothing else is. – Page 287

Danny Boyle’s film 127 Hours is an adaptation of Between a Rock and a Hard Place (2004) the autobiography of the outdoorsman Aron Ralston who, after being trapped beneath a boulder for five days, decided to saw his own arm off using a cheap folding knife.  Ostensibly about the realisation that even the most self-reliant of people get lonely, the film is really an exploration of the idea that we are nothing but a series of moments. 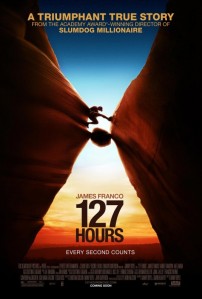 127 Hours begins with Ralston (James Franco) rushing to get ready.  His phone rings, he does not answer.  It is his mother.  He is indifferent to her hopes of talking to him.  Ralston pulls his gear together and climbs into his SUV and takes to the highway, an ear-shattering soundtrack full of energy and colour drowns out the city as he speeds through it and into the wilderness of the night.  As he beds down in the back of his truck he sighs contentedly.  He is free.  Ralston does not so much greet the day as attack it, catapulting himself out of the back of his truck on a mountain bike and tearing off across the rocky wilderness of the Utah desert, bragging to his video camera that he plans to knock 45 minutes off the suggested travel time to Blue John Canyon.  With the wind in his hair and his headphones on, Ralston seems perfectly at peace.  A self-contained Buddha of fulfilment.

His attitude towards other people is obvious the second he encounters a pair of attractive female hikers.  Deciding to offer assistance, he runs down a sheer rock face and appears before them with his face hidden behind sunglasses and a bandana.  The women seem unsure despite Ralston’s sunny tone of voice.  It takes him a few seconds to realise that appearing to a couple of women in the middle of the desert wearing a “Friday the Thirteenth” outfit might not give the best first impression.  This momentary setback aside, Ralston takes the hikers to a hidden spot where they dive into beautifully unsullied sky-blue waters hidden beneath a dome-like ceiling of Utah rock.  The women begin to flirt with him and invite him to a party but he is oblivious, he waves over his shoulder as he heads on his way.  “I don’t think we even featured in his day” one of the hikers ruefully comments.  Of course not.  Ralston is too much in love with living life on his own terms and enjoying the moment to get bogged down in personal relationships or worry about what other people might think about him.  He is a self-contained Buddha of fulfilment. 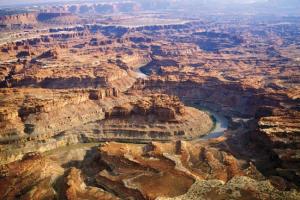 Suddenly, as he makes his way down Blue John Canyon, Ralston slips and winds up at the bottom of a gorge with his arm pinned to the wall by a boulder.  Initially, he reacts with near panic, trying desperately to lift up the rock and screaming for help despite knowing full well that there is no one for miles around.  But then his training as an engineer and a survival guide begins to kick in and Ralston starts to plan.  He takes out his gear, he prepares a sling to sleep in and he starts to dig at the rock near his arm in an attempt to get out.  However, as the days pass and it starts to become clear that a) the rock cannot be lifted without a winch and b) the boulder is actually resting between his arm and the wall meaning that by picking at the with his penknife, Ralston is actually allowing more and more of the boulder to rest on his arm.  So he has been working hard at getting himself more firmly pinned. 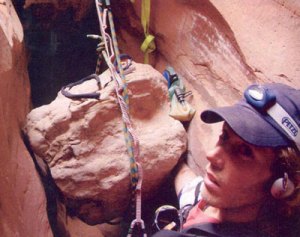 As hopelessness finally joins the sunlight in bouncing its way down to Ralston’s cramped and dusty resting place, he picks up his video camera and looks back at some of the footage taken with the female hikers, briefly considering having a wank to the frozen moment in time when one of the hikers pulled herself out of the water and revealed a couple of inches of pale cleavage flesh.  This desire to gain some sort of relief or pleasure from a moment in the past foreshadows the process of reminiscent sifting and reassessment that gives the film most of its intellectual bulk.  Ralston’s mind drifts back to many neat moments.  Moments in childhood.  Moments when he failed to tell anyone where he was going that weekend.  Moments in which he decided not to answer the phone and speak to his mother.  Moments when a bunch of attractive young people got naked in an SUV with the windows open in the middle of a snowstorm.  Moments spent watching the sun come up over a great canyon with his father.  Moments when a girlfriend expressed her consternation at his refusal to open up to her.  Moments that never existed.  Moments that should have existed.  Moments that could have existed.  Moments.  Moments.  Moments. 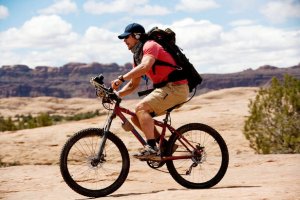 Because Ralston is stuck on his own at the bottom of a ravine, Boyle was unable to use any of the traditional techniques that filmmakers use to convey psychological state.  For example, as he is pinned beneath a rock, Ralston’s choice of actions is extremely limited meaning that we cannot infer very much about the nuances of his personality from what he does.  Similarly, because he has nobody to talk to, it is difficult to get a feel for Ralston on the basis of what he thinks and says.  Boyle acknowledges this problem by allowing Ralston to speak directly to the audience via his video camera, but Ralston’s decision to frame these moments as jokey fictional interviews acknowledges the fact that any insights we gain into Ralston are censored and formed by Ralston’s fading sanity and all-consuming desire to survive.  Because of this, Boyle combines Enrike Chediak and Anthony Dod Mantle’s (both long-term Boyle collaborators) extraordinary cinematography with a powerfully hard-hitting set of sound effects to focus our attention on the raw phenomenology of Ralston’s predicament.  When Ralston breaks the bones in his arm, gunshots ring out.  When Ralston plucks at a tendon or nerve clustered, the screen erupts into light and ear-shattering noise.  We do not see Ralston cut off his arm.  We feel it.  We are there in the moment.

Boyle perfectly captures what it was like for Ralston to be his anterior selves.  As the film vaults back and forth in time and possibility, we get to see what it was like when Ralston was the guy dancing naked in an SUV to Plastic Bertrand’s Ca Plane Pour Moi, we get to see what it would be like to be the Ralston who used a flash flood to pry the rock loose and escape to the arms of his former girlfriend, we get to see the child that was Ralston.  We see all of these selves and yet we do not see any single person emerging from them.  We see memory.  We see psychological connectedness.  But we never see a single self existing through time.

The film communicates the philosophical awkwardness of trying to fashion a narrative of self out of Ralston’s many selves by attempting to sell the idea that he is a man who has lived utterly alone and, having come close to death, realises that he needs other people.  But this realisation rings utterly hollow as it is completely lacking in psychological substance; Ralston was not merely happy prior to the accident; he was blissfully self-contained and self-reliant.  He wanted for nothing.  He was as close as one can get to perfect happiness.  Happiness that came simply from being outside, being fit and having some music to listen to and a desert sun on his back.  The only reason Ralston has for regretting his self-imposed exile is that by failing to let anyone know where he went, his blissful happiness will now end in death.

When Ralston finally saws off his arm and escapes into the desert heat, Boyle stays resolutely in the moment, feeding us through sound and sight the smell of a fetid pool of dead insect liquor that Ralston gleefully gulps down after days of living on piss and memory.  When he is finally saved by a group of hikers, the music soars in triumph but we never learn the hikers’ names.  When we are later informed that Ralston got married we smile at the disconnect between a bored-looking Ralston sitting on a sofa with his wife and an ecstatic-looking Ralston standing on top of a mountain with an ice-pick in place of an arm. 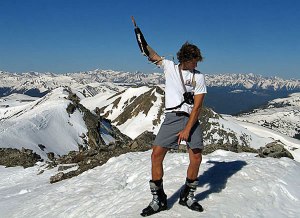 127 Hours is a film that presents life as a series of moments.  Moments whose sheer phenomenological power sears them into our minds, allowing them to exist not just in the grand tapestry of spacetime but also in the ragged mess of our memories.  In Ralston, the film finds a poster boy both for the idea of living only in these moments and for the idea that we are just a collection of selves forever wedded to the moments they inhabit.  The film’s intense focus upon the phenomenology of the moment combined with its subtle subversion of the idea that humans exist as selves long enough to allow them to have proper character arcs drives home a single message: We are but moments in time.   Moments that exist forever but last no time at all.