Erudition is conformity.  It is to read the ‘right books’ and write in the ‘correct manner’.  It is to be a good citizen.  It is to bend the knee in order to be anointed with the kiss of acceptance.

I write the way I write and I think the way I think because of the books I read, the films I watch, the podcasts I listen to and the people I look up to.  I am a part of a set of traditions; Cahiers du Cinema meets Science Fiction fandom meets analytical philosophy meets critical theory.  Because I am a part of these various traditions, I measure my improvement in terms of my asymptotic approach to their styles and values.  In this I am no different to anyone else whether you are seeking to publish short stories, climb the corporate ladder or find love.  We all bend the knee.

This is one reason why it is always a pleasure to encounter something that is both undeniably brilliant and completely detached from the intellectual traditions to which you aspire and belong.

One recent source of pleasure is Antonia Quirke’s Madame Depardieu & The Beautiful Strangers (2007) :

The book is an amusing and beautifully written memoir of one woman’s relationship with men in general and male actors in particular.  It interweaves amusing commentary on the author’s life with a series of blazing profiles of major actors.  Quirke is no theorist, nor is she someone who seems overly interested in themes, cinematography, plotting or sub-text.  What interests her is performances and, as such, her approach to criticism is completely alien to me.  Alien but endlessly enjoyable.  Consider her remarks on Steve Buscemi :

‘You know when we were going out I was a jerk a lot and treated you like…’ Steve Buscemi says to his ex at the end of his own trees Lounge (1996 — a great film, the best film made by an already famous actor in our time).  You can hear the saliva pop on every t and p that his mouth forms.  That amazing mouth.  As if he has just stolen (incompetently, of course) as extra set of teeth and is trying to hide them in there.  the glistening fangs.  The eyelids the colour of raw liver.  The face like a puzzle in which you have to find the bits that are handsome and the bits that are ugly — because there are handsome bits all over his face, well bits and unwell bits, as if only half of him is Peter Lorre, and the other half, shuffled in, is… Bogart, maybe? — pp. 121

I adore the attention to detail.  I adore the way she thrills at the way that Buscemi pronounces certain letters and the ragged, chaotic attempt to convince herself that he is a handsome man and thereby worthy of the amount of time she has spent trying to make sense of his face and why she finds it attractive.  I love the disordered style of Quirke’s delivery, all sub-clauses and weird punctuation like a modernist poet rolling down a hill.

As I worked my way through the book, I started to feel a real pang of recognition.  Where had I seen this style of writing before?  the answer came soon enough.  It is present in the sneering put-downs of guardian columnists like Charlie Brooker and Marina Hyde but it is also present in the work of the great post-War drama critic Kenneth Tynan.  Consider Tynan’s profile of the great silent actress Louise Brooks :

Infatuation with L. Brooks reinforced by second viewing of “Pandora.” She has run through my life like a magnetic thread – this shameless urchin tomboy, this unbroken, unbreakable porcelain filly. She is a prairie princess, equally at home in a waterfront bar and in the royal suite at Neuschwanstein; a creature of impulse, a creature of impulses, a temptress with no pretensions, capable of dissolving into a giggling fit at a peak of erotic ecstasy; amoral but totally selfless, with that sleek jet cloche of hair that rings such a peal of bells in my subconscious. In short, the only star actress I can imagine either being enslaved by or wanting to enslave; and a dark lady worthy of any poet’s devotion:

For I have sworn thee fair, and thought thee bright,
Who art as black as hell, as dark as night.

Madame Depardieu & the Beautiful Strangers‘s reminds me a lot of Tynan’s diaries.  It is a picture of critic in their natural habitat.  A critic who writes not out of respect for Big Ideas or a desire to solve the puzzle of a particular text but from a far more subjective and human place.  A place of gut reaction.  A place of instinctual poetry.  A place of irrational loves and entirely rational hatreds articulated and raised to the status of art. 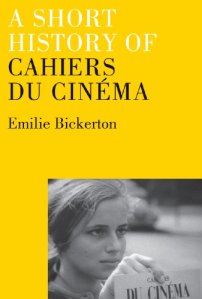 Reading Quirke’s book, I was also reminded of Emilie Bickerton recent book A Short History of Cahiers du Cinema (2010).  An astonishingly angry piece of writing, Bickerton concludes the book by declaring Cahiers to be intellectually and culturally moribund (“a dead sun”) — an assessment which, after allowing my year-long subscription to lapse, I entirely agree with — as a result of a failure to find a new intellectual direction for cutting edge film criticism.  After the departure of the great Serge Daney, Bickerton argues that:

What followed was a period of protracted death for the review: its once derangeante or troublemaking presence became a mouthpiece for the market,  bound within the covers of a standard monthly glossy.  Its well-intentioned coverage was wider than ever, the style mannered, if curiously affectless; the overall effect — so much to choose from, so little at stake — had, and to this day reproduces, the mind-numbing quality of an up-market consumer report. — pp. 110

Bickerton frames Cahiers‘ problems as being one of complete passivity.  Terrified of alienating anyone, the magazine follows not an intellectual manifesto or a set of passionately adhered-to aesthetic principles but a desire to pander.  Stick a celeb on the cover, puff them with an interview full of easy questions designed to help them shift product and round everything off with a few half-arsed evaluative reviews telling people what they should and should not spend their money on.  Anyone who has recently picked up an issue of Empire or SFX will know the formula — most magazine writers are not critics but piss-drinking submissives, utterly prostrate before the ignorance and philistinism of their readers.  The reason for this cowardice is that, as the art critic Robert Hughes puts it: “Hollywood (is) wagging the ass, if not the whole dog, of journalism”.  We can see this in the way that so much of the discourse surrounding film is now economic — who is a popular leading man, who will get the Oscar, did they pick the right projects, what was the box-office.

The style of criticism adopted by Quirke and Tynan before her seem to suggest the possibility to a squared circle.  An intelligent form of critical engagement with film that is all about celebrity.  The problem, of course, is that few of today’s film writers are as perceptive or as stylish as Quirke.  Reading Quirke I am struck by how mis-placed Bickerton’s savagery really is.  The problem with most of what passes for film criticism is not that it is politically disengaged, intellectually vacuous or commercially corrupt, it is that it simply is written by people as lacking in insight as they are style.