The ending of Patrick Keiller’s London (1994) saw the fictional academic Robinson and his loyal but un-named narrator (voiced by Paul Scofield) drowning in a sea of absence.  Having criss-crossed the city of London in a desperate search for its hidden nature, the pair eventually collapse.  Exhausted, deflated and defeated.  London, they announce, is a city without essence.  Devoid of any underlying meaning or fundamental essence, Britain’s capital is a hermeneutic desert.  A space in which no meaning can grow and into which visitors are forced to carry any truths they may need in order to keep themselves alive.

Robinson in Space marks the return of London’s intrepid duo.  This time the pair are hired by an un-named international advertising agency to produce a similar report on the unspecified ‘problem of England’.  However, despite travelling further and further across the country, Robinson’s initial romanticism about England proves to be just as deluded as his romanticism about London.  Indeed, neither an enchanted kingdom full of art and fellowship nor a gothic landscape full of dread and oppression, England reveals itself as a land of facts.  Tedious, maddening, preposterous facts.

The film begins as though continuing the thoughts presented at the end of London.  Surely, if the capital is a hermeneutic void that relies upon the human imagination in order to become habitable, then this puts unnecessary strain upon its denizens?  The narrator expresses his concerns most eloquently :

Reality, as it evolves, sweeps me with it.  I’m struck by everything, and though not everything strikes me in the same way, I’m always struck by the same basic contradiction: although I can always see how beautiful anything could be if only I could change it, in practically every case there is nothing I can really do.  Everything is changed into something else in my imagination.  Then the dead weight of things changes it back into what it was in the first place.  A bridge between imagination and reality must be built.

Not up to the battle for re-enchantment, Robinson fled the city.  Under a cloud of depression, he took a job in a language school in Reading, a much smaller town that he has partly re-enchanted thanks to his old allies Rimbaud and Conan Doyle and the freshly recruited forces offered by Oscar Wilde and a small fleet of “utopian” Routemaster buses.  The narrator compares Robinson’s enthusiasm for Reading to that of Nietzsche for Turin and expresses concern over the mental strain this act of self-delusion is taking upon his old friend.  When the opportunity to set off on another expedition crops up, the pair jump at the chance but right from the start, the journey seems somehow different.

London is a film that deals in broad narratives.  As Robinson traveled around the capital, he would latch onto literary connections; authors, characters, events, places, names.  These he would weave together in an effort to re-construct a hidden London full of fellowship and artistic community.  Robinson in Space uses a much different methodology.  As though chastened for his use of broad narrative sweeps, Robinson begins his seven journeys around England by concentrating upon the facts.  Even a visit to the crater where the Martians landed in Wells’ War of the Worlds yields the somewhat gnomic factoid that every year 500 tons of Mars lands on the Earth.  How do we know that it is that much?  How does it get here?  What are its effects?  We are never told… but we are given more facts to chew over. 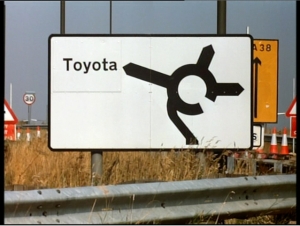 A place, a company or a state of mind?

As they move from place to place, the pair treat us to a host of statistics: export tonnage, square meters of plasterboard produced per minute, world rankings, population growth, dates of construction, dates of demolition, production costs, grant allotments, building plans and profit margins.  Like an unrelenting torrent of mud, these facts obscure the landscape.  They cover England from sea to sea and completely submerge any nature or meaning that may once have existed there.  Regardless of what it may once have been and regardless of what its more imaginative visitors and inhabitants may still see in it, England is now entirely defined by economic facts.  It is a land not of literature and art but of political press briefings and official statistics. 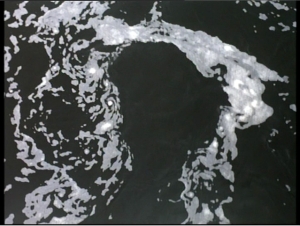 One of the film's few shots of running water 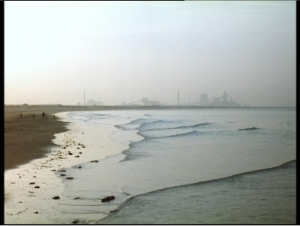 Keiller presented London as a quintessentially postmodern place.  A place with no fundamental nature that was nonetheless spacious enough to accommodate any nature that people wanted to import into it.  This sense of relentlessly churning deconstruction and reconstruction was artfully captured in London’s frequent returns to images of running water.  Though Robinson in Space also features images of running water, these expanses are more often than not framed by bridges and roads — useful byways that allow England’s inhabitants to glide over the surface of the constantly changing hermeneutic waters on economic structures built of iron and concrete.  England is not a land of flexibility.  It is not a pluralistic place that allows self-definition and expression.  It is a land governed by the iron laws of econometrics and statistical projection.  It is not so much empty as full of ugliness.

Beneath the industrial yoke

Layer upon Layer of useful byways

Eventually the strain of the quest for meaning seems to get to Robinson.  His desire to find a romantic substrate to the world begins to fray and dissolve into an ill-conceived froth of leased F-16s and giant vegetables.  Even his commitment to the fantastical begins to recede as romantic SFnal talk of Martian Buckminsterfullerenes is replaced by talk of its usefulness to British industry.  When Robinson passes by the Wordsworth museum, the narrator is concerned that he seems about to go in and register a complaint.  Robinson quietly sneaks off to sabotage a fighter-bomber, solemnly intoning:

In each man’s life, there comes the moment when his heart must either burst or turn to stone

Robinson in Space is a film about the ultimate failure of the romantic project.  Romanticism was developed as a response to the Enlightenment and the process of disenchantment through which science and bureaucracy banished the gods from our day to day existence.  While London punctured the prospects of Romanticism by suggesting that a void of meaning is more likely than a hidden romantic reality, Robinson in Space forces the bar for re-enchantment even higher by suggesting that the space once occupied by fellowship, art and meaning is now entirely dominated by facts.  Dry, inhuman facts.

The film’s closing images suggest an immensely sad and alienating vision of modern Britain.  Weathered carvings in ancient rocks suggest that there is still meaning to be found in England but that this meaning is slowly fading from view.  A picture of Hadrian’s Wall on a phone card presents us with the current order of things: English heritage used to sell time on a phone network.  England is a place without meaning and yet it is haunted by the ghosts of yesterday’s truths.  Ghosts put to work in the service of facts.  Ghosts used to sell.  Ghosts rendered decorative.  Ghosts made useful.