In his excellent extended essay What Ever Happened to Modernism? (2010), Gabriel Josipovici provides a spirited reading of Cevantes’ Don Quixote.  Quixote, argues Josipovici, is not merely the first modern novel, it is also the first post-modern novel as within the novel’s various framing devices lies the recognition that there is something profoundly false about the form of the novel.  A falseness that can never quite be expunged, regardless of  how full-throated an author’s commitment to realism might be :

“Don Quixote’s madness dramatises for us the hidden madness in every realist novel, the fact that the hero of every such novel is given a name merely in order to persuade us of his reality, and that he has giants created for him to do battle with and Dulcineas for him to fall in love with simply to satisfy the demands of the narrative.  And it dramatises the way we are readers collude in this game because we want, for the duration of our reading, to be part of a realised world, a world full of meaning and adventure, an enchanted world” [p. 34]

No genre has so proudly worn its commitment to realism as the police procedural.  From TV series such as The Wire through to books such as Izzo’s Total Kheops (1995), McBain’s 87th Precinct series and Simenon’s Inspector Maigret novels.  The police procedural does not merely seek to entertain by providing us with a mystery that the protagonists can gamely unravel, it also seeks to reflect the reality not only of the books’ settings but also of the job of solving crimes and being a policeman.  However, as Josipovici wisely points out, there is a tension here.  David Simon’s The Wire beautifully captured the political realities of contemporary America, but is it not just a little bit handy that one of the police officers should have chosen to go and get a job teaching thereby allowing the series to devote an entire series to the problems of America’s schooling?  Similarly, Izzo’s Total Kheops does a wonderful job of communicating the texture and character of the town of Marseilles, but is it not convenient that the book’s protagonist listens to cutting-edge hip hop while drinking local wines and eating immaculately cooked locally-sourced produce rather than humming along to Johnny Halliday whilst enjoying a burger and a coke?

Clearly, the police procedural’s commitment to realism is in desperate need of being challenged and deconstructed.  Corneliu Porumboiu’s Poliţist, Adjectiv scratches that itch.  With long and delicately manicured finger nails.

Cristi (Dragos Bucur) is a lowly Romanian cop.  Assigned by a prosecutor to investigate a tip-off that a local teenager is selling drugs, he spends his days standing in the streets watching a group of teenagers walk back and forth to school.  Occasionally, he needs to get some information from records, at which point he heads back to the office and has to convince his co-workers to go and get the information for him.  At the end of the day, Cristi goes home and talks to his partner.  Sometimes he drinks too much and squabbles with her.

Cristi’s investigation is quite obviously a waste of time.  Upon being pinched in possession, one teenager turned in another and now Cristi has to gather evidence that will allow him either to find the dealer or put away the teenager who was turned in.  But Cristi never gets any new information.  All of those hours of standing around will lead to nothing more than a bust for possession.  A bust that will ruin a good kid’s life.  A bust that is pointless as Cristi thinks that the laws on possession are going to be relaxed soon anyway.  Because Cristi does not want to ruin the teenager’s life, he has been avoiding his boss.

Police, Adjective is a blisteringly realistic portrayal of a police investigation: when Cristi spends hours standing in a road staring at a gate with nothing happening, we join him.  When Cristi has to make phone calls to chase up information requests, we make them with him.  When Cristi is told to wait ten minutes before going into his commander’s office, we sit and wait with him for ten minutes while he stares into space and his partner makes small-talk with a secretary.

Cristi in a meeting

Put simply, Police Adjective is an astonishingly boring film.  It is a film in which absolutely nothing happens because that is what life is really like.  The days of a police detective rarely (if ever) fall into neatly Aristotelean three act structures with car chases, shoot-outs and justice being served.  However, nor do they happily mirror the popular political narratives of the day.  Nor do they capture the essence of what it means to live in a particular place and at a particular time.  Life is messy.  Life is boring.  Life is.
By refusing to make any compromises to the aesthetic demands narrative, thematics or sub-text, Corneliu Porumboiu is providing his audience with what they ask for but secretly do not actually want.  However, Porumboiu’s point is necessarily reflexive.  By making a film without clear narrative and without theme or sub-text, Porumboiu is providing us with a world just as artificial as if he had filled it with local colour, vibrant politics and exciting car chases.  To write is to use language and for something to be expressed through language is for it to be changed, interpreted, filtered, rendered un-real.  This tension, manifest in all ‘realistic’ art, is explored through Police, Adjective’s obsession with language. 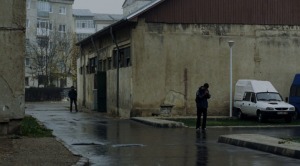 A bit of local colour. Sense of place? Not so much.

In an early scene, Cristi talks about potential holiday destinations with the local prosecutor. Bucharest is compared, somewhat unfavourably, to Prague but the prosecutor is quick to present this as a marketing problem.  Evidently people prefer Prague because it is a ‘Little Paris’.  If Bucharest became known as a ‘Little Paris’ or a ‘City of Gold’ (to reflect the fact that it might have a building with a golden roof) then the tourists would flock to the city.  Language makes reality.  It does not reflect reality.

Cristi with his Boss

Cristi’s problems with language continue throughout the film as he and his co-workers are frequently reprimanded for using the language of criminals rather than police (“squealer” as opposed to “informant”).  He also runs foul of the spelling reforms instigated by the Romanian Academy as both his partner and his boss are up on correct form while Cristi struggles to even come to grips with the concept of there being a correct form of language that is imposed by some centralised governmental body.  Indeed, in Police, Adjective correct use of language is associated with de-humanisation and authoritarianism.  In one extraordinary scene, Cristi makes it clear to his boss that he has no intention of arresting the teenager and his boss responds by having him look up words in the dictionary.  Cristi’s partner refers to this process as ‘dialectical’ but Romania is a former Communist country and, as such, Marxist analytical techniques are not emancipatory but repressive: ‘dialectics’ is the process through which the powerful compel the powerless to conform to their wishes.  Language crushes reality.  Language makes reality.

Cristi’s frequent run-ins with language and the fact that the complexities of his life invariably seem to reduce down to a page-long daily report that goes in a file sets up a tension between the real and the linguistic.  But to present this tension as a moral or even an aesthetic one is to overly simplify matters.  As H. Porter Abbott puts it in The Cambridge Introduction to Narrative (2008) :

“Once you start thinking along this line, more examples come to mind.  In other words, though stories are always constructed and always involve our willing collaboration for their completion, that does not necessarily mean that they are false (…) we live much of our lives in and among stories.” [p.22]

The idea that the teenager is selling drugs, the idea that Cristi is a man of conscience and the idea that it is the job of a police to enforce the law regardless of his personal feelings are all stories.  They all simplify the world by abstracting it and imposing meaning upon it, but that does not necessarily mean that they are false.  Stories are a part of the world and by telling us a few stories, albeit stories that know that they are stories, Porumboiu is engaging in the same sort of activity that Cervantes once engaged in.  He is making a world.  He is showing us a world.  What makes Police, Adjective so special is that it recognises both its own unreality and the reality of its own stories.