Do you get on with your family?  Think about it before you answer.  I don’t mean ‘do you squabble?’ or ‘do you talk to your family?’.  I mean do you really get on with them?  I ask because this is quite a common question but, upon reflection, I am not really sure how to answer it.  There are many ways in which you can ‘get on’ with people and not all of them are good.  Ideally, ‘getting on’ with someone would mean accepting them for who they are and being accepted in return.  But the truth is a little bit more complex than that because all too often we play roles.  Maybe we refuse to bring up old grievances with relatives at Christmas is order to ensure that everyone has a nice time.  Maybe we don’t mention that we don’t have a boyfriend because, actually, we prefer girls.  Maybe we let our parents and our families believe things about us that are not true.  Because it makes our lives easier.  Because it makes them happier.  So I ask again : Do you get on with your family?

Argentinian director Lucrecia Martel’s third film La Mujer Sin Cabeza is about a woman who gets on with her family.  She gets on with her family by accepting the role that she has forced upon her and, in return, she is protected.  Protected from the repercussions of her actions.  Protected from herself.  The Headless Woman is a haunting portrayal of a woman who is suddenly estranged from her own life and who comes to realise the true price she pays for the privileged existence she has lead.

The film opens with a wall of sounds and images.  A group of attractive and clearly wealthy middle-aged women are picking up and/or dropping off their children.  They speak at cross purposes, their children run in and out of shot, conversations dip in and out of earshot.  It is a mess.  Which child belongs to which woman?  Who is talking to whom?  Are they all part of the same conversation or are we being fed snippets of several different overlapping ones?  They do not seem concerned.  The scene’s apparent impenetrability is due to the fact that we are outsiders.  We are attempting to make sense of a network of friendships, family ties and shared experiences with no frame of reference and no way of getting our bearings.   To those within the social group, the exchange of kisses and words makes perfect sense.  To those without links to that network, it is just sounds and images.  At least for now…

About to hit... something

As one of the women drives away we follow her.  Martel feeds us a view from the front of the car and it seems that we might well be going too fast.  Suddenly there’s a loud thump.  The car has hit something.  As audience members, we do not know where we are.  We do not even know the name of the woman we are accompanying.  We are lost, but it soon becomes obvious that the woman is just as lost as we are.  She hit her head in the accident.  She does not know who or where she is.  At the hospital, we learn that the woman’s name is Vero (Maria Onetto) but before long she is wandering out of hospital and checking into a hotel.  Trying desperately to find some semblance of order in a world that no longer makes sense to her.  When asked questions, she bluffs.  When she is recognised by a man she assumes that he is her partner and lures him into bed.  Maybe he will help her.

Martel makes the most of cinematographer Barbara Alvarez’s peek-a-boo camera work to instil a remarkable sense of dread and alienation into these proceedings.  Vero is completely lost.  Nothing makes sense any more, even the days and nights seem to be running into each other.  How long did Vero sleep after the accident?  The situation only gets worse once Vero is taken home.  Now she has to try to work out who is a member of her family and who is a member of her seemingly huge household staff.  In a moment of surreal comedy, Vero is escorted to a dentists office.  She calmly greets the people in the waiting room and grabs a magazine before sitting down to wait.  The other patients look at her strangely… evidently she is the dentist.  Stepping into her office, Vero is given a present by the nurse.  She thanks her but is promptly told that the present is for Vero’s aunt, the nurse picked it up on her way to work as instructed.

Surrounded by people and yet alone

The Headless Woman presents a harrowing vision of the kind of cognitive estrangement that comes with mental illness or serious neurological trauma.  For Vero, nothing makes sense any more.  All the memories and relationships that make up her life have been severed by a blow to the head.  She is in the same position as the audience : disoriented, lost, anxious.  Indeed, when Vero goes to visit her aunt, it is almost as though she is looking at some future version of herself.  As the family watch a home movie, the old aunt keeps asking who everyone is but Vero is just as lost as she is.  She is drowning in the details of her own life.

Vero is in the exact same position as the audience.  She is alienated from the world of the film and is trying to piece together her own life from clues gleaned from people’s reactions to her.  She is learning her own world at the same time as the film’s audience.  The picture that slowly builds up is not a pretty one.  Halfway through the film, Vero begins to get her memory back.  She remembers that she hit something in her car.  Hit someone.  She tells the men in her family and they suddenly swing into action. 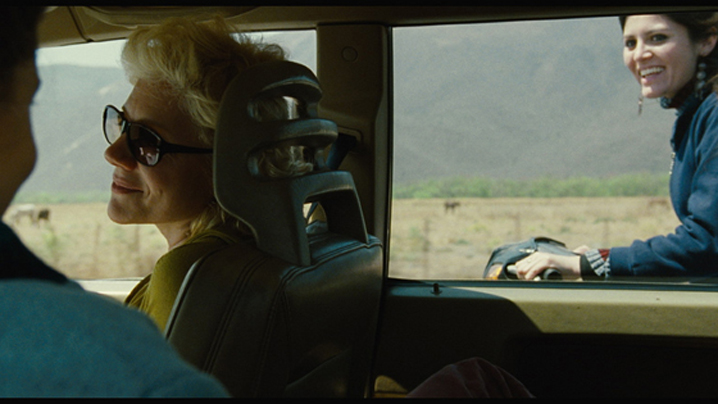 Dull picture I know... this is what you get for writing about films you saw at the cinema

While The Headless Woman’s opening acts are partly about cognitive and emotional estrangement, they are also about the extent to which a social situation is self-preserving.  Social groups have a life of their own.  A momentum if you will.  Even those people who are acutely aware of and maybe even angry about their status within a group understand what is expected of them and what to expect of the people around them.  To be a member of a social group is to accept the burden of these expectations.  To conform to them.  As a result, a well-ordered group will have its own momentum.  The opening scenes of The Headless Woman demonstrate how it is possible to be carried along by that momentum.  To surrender one’s agency to the natural rhythms of the group.  To simply get on with the people around you.

Vero is a partial outsider on her own world.  Her time away from the complex network of hierarchies that compose her life allow her to realise quite how little freedom she genuinely has.  After telling her husband and male relatives about her accident, they use their contacts to make it all go away : The hospital records go.  The police are spoken to.  The car is discretely repaired.  Vero is not asked about any of this… it simply happens.

It is tempting to read the final act of The Headless Woman as a comment upon the class structure of Argentinian society or upon the latent misogyny of Argentinian men who “take care” of their women by treating them like children.  Both of these readings map quite neatly onto the film it must be said.  However, I take Martel’s point to be much more profound.  After all, Vero is not a victim in all of this.  She is a willing participant.

In The Fear of Freedom (1941), the Frankfurt School philosopher Erich Fromm distinguishes between “Freedom From” and “Freedom To”.  “Freedom From” is the kind of freedom that gets the headlines.  It is the kind of freedom we talk about when we talk about overthrowing tyrannies and fighting for our rights.  It is the vision of freedom that underpins the calls for a small state.  The British philosopher Isaiah Berlin also wrote about it as “Negative Liberty”.  Freedom From can be understood as the amount of social space in which we are free from being coerced into acting as others want.  According to Fromm, many people speak about their desire for Negative Liberty but in reality being confronted by a complete lack of direction (as in Vero’s case) can be disorienting at best and terrifying at worst.  Fromm argued that, because of this fear of freedom, people generally try to immerse themselves in social groups that are bigger than themselves.  Groups where they have an ordered existence.  An ordered existence such as that offered by the old feudal order :

“What characterizes medieval in contrast to modern society is its lack of individual freedom… But altogether a person was not free in the modern sense, neither was he alone and isolated.  In having a distinct, unchangeable, and unquestionable place in the social world from the moment of birth, man was rooted in a structuralized whole, and thus life had a meaning which left no place, and no need for doubt…There was comparatively little competition.  One was born into a certain economic position which guaranteed a livelihood determined by tradition, just as it carried economic obligations to those higher in the social hierarchy.”

Faced with the horror of a directionless existence, Vero is only too keen to surrender her positive liberty.  After realising quite how little freedom she has, Vero flexes her muscles by… colouring her hair.  She has seen the limits of her world.  The limits built up by her social position, by her wealth, by her status as a woman and her position within a social group filled with assertive men.  She sees the limits and she accepts them.  She is home.  Her acte gratuit of colouring her hair is as much an exercise in personal freedom as it is an act of complete capitulation.