Morality takes as many forms as there are cultures to manifest it.  For some people, it is a question of commandments.  For others it is a question of ideals.  For other groups it is a question of economics, minutely calibrated cost-benefit analyses.  But for all of these systems and all of these cultures, morality always boils down to a series of dichotomies : Should I do X or should I do Y?  Simple binaries that make the world.  Works such as Austen’s Pride and Prejudice (1813) and Bronte’s Wuthering Heights (1847) encourage us to see our relationships in similar terms.  Do we want a love filled with the peaks and valleys of passion,  or do we want a pleasingly mild existence, an emotional even keel?

Claude Chabrol’s 2007 film La Fille Coupee En Deux seems to attack this vision of human relations.  We expect to have to make a trade-off in our personal lives, but what happens if both of our options are bad ones?  Chabrol hints at an answer.  An answer which, like Chabrol’s great films of the late 60s and early 70s, depends upon a viciously cynical vision of the class system that continues to corrupt French life.  But is this vision perhaps too cynical for its own good?

The film begins by introducing us to Charles Saint-Denis (Francois Berleand).  Saint-Denis is an ageing author.  A great man of letters.  His career has won him prizes, critical acclaim and money.  Money he has used to construct a modernist castle for himself in the Lyon suburbs far from the much-despised lights of Paris.  Saint-Denis is lured out of seclusion by his femme fatale agent Capucine (Mathilda May), who convinces the author to allow himself to be interviewed by a local cable station.  A station that also employs the young and seemingly innocent weather-girl Gabrielle Deneige (Ludivine Sagnier).  Deneige and Saint-Denis hit it off immediately.  There is a crackle in the air the second she walks in on him in make-up.  Before long, the mismatched couple are secret lovers.  This annoys one of the local playboys. Heir to a vast chemicals fortune who spends his time drinking and getting into trouble with his valet/carer, Paul Gaudens (Benoit Magimel) has set his heart on Gabrielle.  However, no matter how hard he tries (at one point he nearly strangles her in frustration), Gaudens cannot lure Deneige away from her aged author.  The difference, we are encouraged to think, is that Gaudens is unstable and unpredictable while Saint-Denis is an obvious but charismatic rogue.  However, if this were the only dichotomy facing Gabrielle, this would not be a Chabrol film.

Half naked women. No actual sunshine.

It soon emerges that Saint-Denis is not just a simple rogue.  His house is decorated in an entirely masculine style, filled with metals and pictures of naked women.  His agent is a beautiful and flirtatious woman and his wife, he repeatedly insists, is a saint.  Is she a  saint because she forgives his dalliances?  Or is she a saint in the sense that he would not dare do sinful things with her?  Indeed, aside from playing mind games with Deneige, Saint-Denis is also something of a sadist.  He demands that Deneige humiliate herself for him.  So we see her crouching beneath the table in order to suck him off while he works.  Then we see her crawling across the floor to her master’s feet.  Then we see Saint-Denis take her to his club where – we are told but not shown – Deneige was expected to have sex with people in front of Saint-Denis.

At least she seems happy enough. 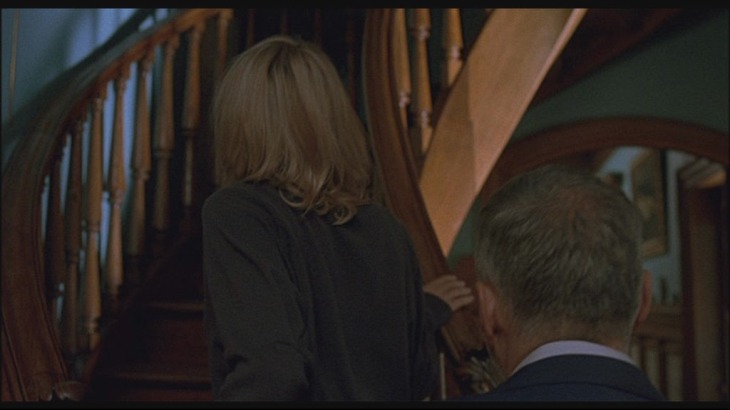 Together they go upstairs. But we never see what is at the top.

As disturbingly one-sided as this relationship might appear, Deneige falls apart when Saint-Denis loses interest in her.  She takes to her bed and starts to starve herself to death.  Desperate to help her out of her depression, Deneige’s mother contact Gaudens who rides to the rescue and reveals himself to be, despite his psychological fragility, utterly devoted and utterly in love with Deneige.  Desperate for happiness, Deneige marries Gaudens but the marriage does not take.  Deneige cannot get over Saint-Denis and Gaudens cannot get over what Saint-Denis did to Deneige or the fact that he had such power over a woman he is utterly devoted to.  In short, Gaudens cannot live with the fact that the old man got in there first and got in there deeper than he could ever hope to get… And so he decides to murder Saint-Denis. 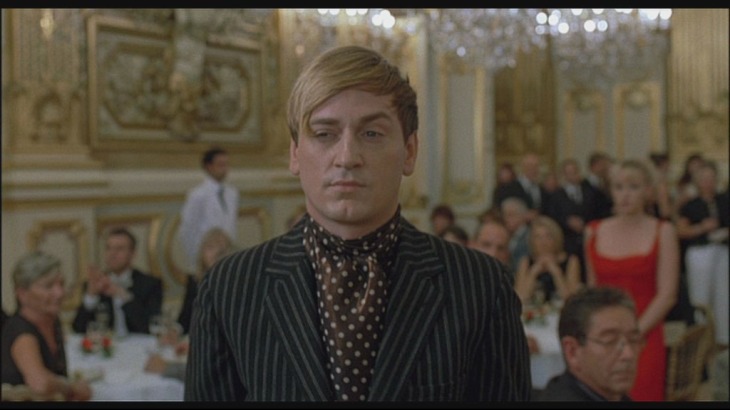 Gaudens struggles to keep the attentions of Gabrielle

Chabrol relishes in driving home the fact that all of the moral dichotomies facing Gabrielle are ultimately illusory.  If she is asked to choose between roguish stability and devoted instability, the stability will reveal itself to be illusory.  If she then accepts the value of a devoted partner, she learns that the devotion is not necessarily to her but to an idea of her.  An objectification of her.  A desire to possess that object.  Every choice Gabrielle makes is the wrong one.  In fact, it is not at all clear that there ever was a right one for her except possibly to ignore the attentions of both men.  The deck was stacked against her to begin with. 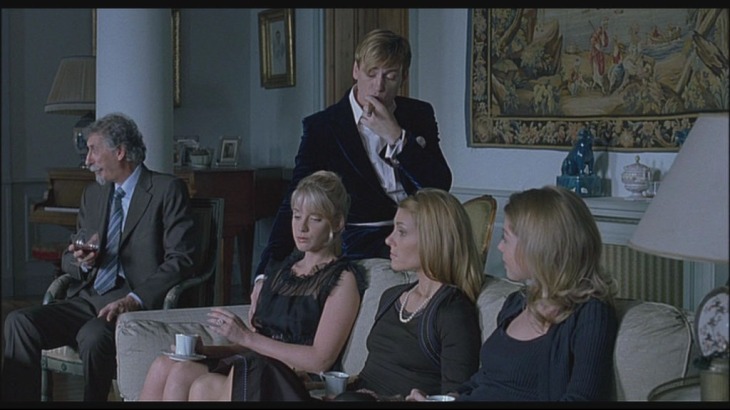 The film makes interesting use of colour and lighting. Here we see the married Paul and Gabrielle spending time with their dull, rich friends and family. Grey is the dominant colour, the lighting seems natural

Conversely, the scenes with Deneige on her own are often saturated with colour and brightly lit. Unnaturally lit.

The dull/bright, natural/unnatural colour schemes are another example of Chabrol's ambivalence and his focus upon false dichotomies. Just because the bourgeois in the film are dull, it does not necessarily follow that Deneige's charms are natural. In fact, they are cinematically enhanced.

This stacking of the deck is a reflection of the class system.  Both Saint-Denis and Gaudens are rich and powerful men.  Men whose desires and whims have long been catered to by a society that happily bends its knee to them.  When they decide to seduce Deneige, they do so not out of any real desire for emotional partnership, but out of a desire to see their desires satisfied.  Whether those needs are purely sexual as in the case of Saint-Denis or emotional as in the case of Gaudens, the dynamic remains the same : Gabrielle exists in order to satisfy those needs and the second she is no longer useful in that regard, she is to be cast aside.  This fact is driven home by the final confrontation between Deneige and her mother in law.  Having given the older woman everything she desired, Deneige is told that she will get nothing for her troubles.  “Dismissed” the mother-in-law sniffs from beneath her sun hat.

The problem with The Girl Cut In Two is that it is cold.  Chabrol’s greatest films drew much of their power from the icy detachment that fills his vision of society, but they never allowed the audience to forget that his films were ultimately about the lives of human beings.  Films such as Les Noces Rouges (1973) were driven by the passion of the central couple while even more subdued films such as Juste Avant La Nuit (1971) and Les Biches (1968) contained moments of visceral and powerful denouement.  Chabrol’s skill as a director has always been to package the human within the cerebral.  In contrast, The Girl Cut In Two lacks that basic humanity.  Deneige is never sympathetic enough that we become involved in her plight.  Her relationships with Gaudens and Saint-Denis are neatly characterised but we never feel Gaudens’ passion or Saint-Denis’ desire to humiliate.  The decision to deprive the audience of the images of Deneige’s ultimate humiliation is ultimately a fatal one.  Gaudens’ murder of Saint-Denis simply does not pack enough visceral power to anchor the film’s narrative.  The result is a film that is well-written, cleverly conceived and nicely acted.  But it never really has the power to affect.

The film has a rather enigmatic ending. A riot of colour that would make The Archers green with envy but which seems to be quite quietly critical of the character of Deneige.

In another film, this kind of ending might be seen as 'triumphant' but instead we see Gabrielle working as a magician's assistant. Finally happy. As though appearances are all that she has to offer. I suspect this is what has lead many critics to call the film misogynistic. I think that the charge is a bit strong, as is the ending. The film gives no basis for being that critical of its main protagonist.