Cinema tends to ask only a narrow spectrum of questions.  Questions inspired mostly by writers who themselves are concerned only with asking a narrow spectrum of questions : Who are we?  What is happiness?  What is freedom?  But comparatively few films seek to answer the question of how we (as a species, as a culture and/or as individuals) should deal with the future.  Even works of cinematic science fiction tend to shy away from these kinds of questions.

One book that has attempted to answer this question only to produce an intriguingly ambiguous answer is Rudy Rucker’s Postsingular (2007).  The book deals with humanity’s attempts to come to terms with not one but three separate Singularites.  The Singularity that dominates the bulk of the text allows all humans to not only communicate with all other humans, but also to see what they see.  For some, this has resulted in fame and fortune as their lives are interesting enough to result in corporate sponsorship and syndication.  Rucker presents the technology as incredibly cool and almost spiritual in its capacity for breaking down the barriers between human consciousnesses.  But this does not mean that he shies away from the down-side to this degree of interactivity and access.  For example, when a couple are attempting to consumate the physical attraction that has been brewing between them, they suddenly find themselves aware of their friends watching them.  This instantly places them on a different footing.  They are not merely living their lives, they are performing for an audience.  In Rucker’s world, everyone is potentially in the public eye and most people act accordingly.  In effect, humanity is plunged into a state of what Sartre called Being-For-Others.

But this is all science fiction right?  Couldn’t really happen.

Sally Potter’s Rage suggests that this is happening already.

Rage is framed as a series of talking head interviews and video confessionals conducted by a mute film-maker named Michelangelo.  Set behind the scenes at a fashion show, Rage’s characters include transvestite models (Jude Law), corporate hegemons (Eddie Izzard), messianic designers (Simon Abkarian), fashion critics (Judi Dench) and photojournalists with thousand yard stares (Steve Buscemi).  Initially, the various characters are happy to present their insights into celebrity and fashion but before long things start going wrong as accidents give way to murders and riots.  This narrative progression effectively provides the audience with two hooks for making sense of the film : The first is that the film is a fictional documentary about the fashion industry.  The second is that the film is a kind of murder-mystery in which the suspects in a murder are interviewed by the media while the police search ineffectually for the killer.  Both hooks suggest membership of wider cinematic genres and so invite comparisons with fashion-related films such as Robert Altman’s Prêt-à-Porter (1994) and R. J. Cutler’s The September Issue (2009) or films about the relationship between media and crime such as Rémy Belvaux’s Man Bites Dog (1992) or Oliver Stone’s Natural Born Killers (1994).  However, as the film refuses to deliver any insights into the fashion industry and its murder plot never quite coheres into anything substantial it seems as though these hooks might be better understood not as themes or narratives but as dramatic conceits.  Ladles used by the director to stir the pot and prompt changes in the characters’ environment forcing them out of their comfort zone and into a place where they might reveal some previously hidden truths about themselves.  When seen in this light, Rage seems less a fashion or a mystery film than a series of monologues similar to those produced by Alan Bennett for his Talking Heads BBC series.  Unfortunately, when seen in this light, Rage does not shine any brighter than it does in the light cast by the fashion and mystery genres.

The problem is that while the performances are undeniably enjoyable and engaging, the characters, as written, are frequently two-dimensional and locked in to arcs that are overly predictable.  For example, Jude Law’s Minx initially presents herself as an intimidating avatar of self-esteem, discipline and ambition but by the end of the film she is revealed to be psychologically fragile, deluded and desperate for affection and understanding.  A similar problem is present in Judi Dench’s icily cerebral fashion journalist Mona Carvell.  Dench does a wonderful job delivering Carvell’s verdict that fashion is a form of pornography but it comes as absolutely no surprise when she is brought to heel by the new owner of her magazine.  The revelation that print journalists face certain economic pressures offers no more of an insight than suggesting that seemingly arrogant people might well be incredibly  insecure.  These observations, though undeniably correct, are lightweight and because Rage’s insights are lightweight, its characters seem that way too.  The dramatic monologue is a form that demands complex characters and this film simply has none to offer us.  However, this is not the say that Sally Potter’s Rage is an uninteresting film.  Indeed, if one looks beyond the content to the form, one finds a degree of insight and engagement that is sadly lacking in the film’s script.

Rage was released simultaneously across a number of different platforms.  You could see it in a cinema or buy the DVD but you could also download it to your computer and your mobile phone.  Indeed, the visual aesthetics of the film seem particularly well tailored to the mobile phone screen where nuances of facial expression are difficult to convey.  Potter gives us not only tight close-ups on her actors but also distinctive backdrops and color schemes that illustrate thematic connections between characters as well as mirror their internal emotional states.  For example, early in the film characters are frequently framed with a dark blue background representing an adherence to the company line but as the characters relax they acquire their own color schemes that subtly change over time.  Abkarian’s messianic designer glows bright orange as he proclaims on the utility and the necessity of his art but as the off-screen tragedies accumulate, his rhetorical fire diminishes as does his color.  Similarly, Law’s Minx begins the film with a blood red backdrop matching her lipstick only for it to transform into baby pink in a moment of supreme vulnerability.  The most powerful and visually striking moment of the film is a montage of faces, all horrified and grief-stricken and all surrounded by a black of darkest despair.

Potter’s technophilia also extends to many of the film’s secondary themes.  When the characters speak to camera they go out of their way to name-check the fictional filmmaker and as such they are not merely addressing ‘the camera’ or ‘the audience’ but rather a character who is never seen or heard but who gradually takes shape through the reactions people have towards him.  This approach to characterization is reminiscent of that used in video games such as Half Life 2 (2004) and Dead Space (2008), both infamous for their use of mute protagonists who also serve as points of view onto the artificial worlds they inhabit.  Part of what makes Potter’s treatment of Michelangelo so pleasing is her willingness to fully embrace his limitations as a character rather than edge around them. 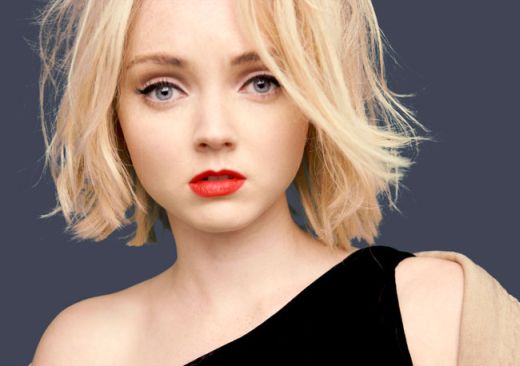 The moment Michelangelo (the camera) first encounters Lily Cole’s model Lettuce Leaf, an almost animalistic understanding passes between them.  The camera zooms in on the model’s face and hovers around seeking out new angles while the model coyly poses and reacts to the movements of the lens. These are the rituals of human flirtation played out through technological means.  Human nature as media artifice.  Indeed, Potter seems particularly interested in Michelangelo as a character where the traditional and technological worlds collide. 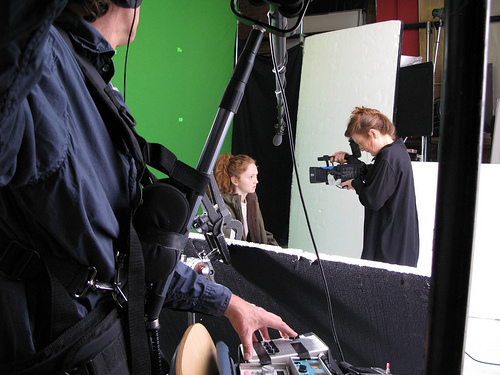 Behind the Scenes Shot

Towards the end of the film, the characters become aware that Michelangelo is making his film available online.  They arrive at work to find people protesting and quoting from interviews they gave the previous day.  Suddenly, the personal is the public.  Some characters are enraged, at the violation of confidentiality but the mistake is theirs.  Michelangelo is but a camera, all he can do is record and broadcast.  It is in his nature.  Indeed, the film paints him as a young man who has grown up and internalized the values of the internet, the perpetual blurring of the lines between the intimate and the universally broadcast.  The pictures of you blind drunk posted to your Facebook account that can be accessed by everyone at work.  This sets up an interesting parallel between Michelangelo and his interviewees.

Which is the more terrifying prospect? A tyrannical society where all are forced to live within a Panopticon or a Democracy in which all can be seen and all are watching?

Initially, the film encourages us to feel contempt for its fashionistas. We see them with their ridiculous outfits and their obsessive concern over brands and popularity and we laugh at them.  Then, when we start to see the victims of this culture we feel anger.  Anger over the model who died and the pizza delivery boy who gets sucked into something ugly.  But by the end of the film it becomes clear that Potter is holding these characters up as exemplars of where we are headed as a society.  Michelangelo made his film widely available with no awareness of the consequences of his action.  When the film starts a riot he is reduced to tears by the guilt.  This places him on an even footing with his interviewees for the first time in the film.  The fashionistas are all damaged goods because they have all had to learn that there are consequences to putting yourself in the public eye.  They have to look just right and say the right thing because there are people watching and judging.  Say the wrong thing and anything could happen.  This is the lesson that Michelangelo learns at the end of the film and the lesson that Potter seems to be encouraging us all to learn.  To live a life in which the personal is presented to the public is to be relentlessly judged and we should realize the costs as well as the benefits of living such a media-saturated existence.