One of the things that is most fascinating about Pialat as a director is that though completely devoid of sentimentality, his work also shows a perpetual awareness of the temptations that it offers.  This lack of sentimentality applies abstractly to broad topics such as childhood but also, more concretely, to his own life.  It is said that The Mouth Agape is one of Pialat’s most ‘autobiographical’ works but this is not a particularly useful distinction to make with regards to Pialat’s work as so many of his films – including Nous Ne Vieillirons Pas Ensemble (1972) and Loulou (1980) – are effectively just dramatisations of real events from his own life.  A better way of thinking about La Gueule Ouverte is that it is one of his more intrusive works.  It shines a light into places where we would rather not look.  An unflattering and unsentimental light right onto the death of Pialat’s mother and the lives of both himself and his womanising father.  It is a film about death without being about loss and a film about grief without being about sadness.  It is, in a word, pitiless.

The film opens in a hospital as an older woman (Monique Mélinand) prepares for a scan.  She is physically slight and quite pale but seems in quite good spirits, informing her waiting son (Philippe Léotard) that her arm is fine but that she now needs radiotherapy on her spine.  This is the only detail the film gives about the disease that will eventually consume her.  It also sets the clock ticking.  Everyone now knows that death will come, but they do not know when.

Waiting at the Hospital 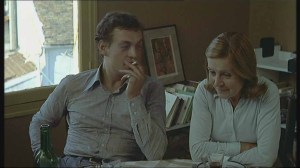 From there we move to the son’s apartment.  In one long take, Pialat shows us a son and his mother in happy, vibrant dialogue as he asks her about his father’s (Hubert Deschamps) womanising ways while she responds by gently chiding him for following in his father’s footsteps by cheating on his beautiful wife (Nathalie Baye).  For a while, the pair are happy but then the spell is broken and the son puts on some opera.  Terminating discussion as the pair then sit awkwardly together.  This is one of the last times in which we will see the mother as an actual human being with feelings and thoughts of her own as, before long, she simply becomes an object.  Unable to move and barely able to speak, the mother is bed-ridden and, with her body covered up to the chin, is presented almost as a disembodied head resting on a pillow.  All we see of her is her face slowly growing paler and thinner.  This objectification is also reflected in the attitudes of the family.  The initial sadness and worry about the mother’s condition (and a desire to make her feel better through faith healers and neck braces) is soon eclipsed.  Replaced by the rump of filial obligation and the fossilised remains of love turned into the barest bones of human empathy.  She is not just an object, but a chore. 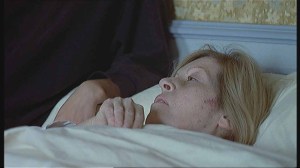 At Home in Bed

The woman’s family do not react to her imminent death with sadness but rather with an attempt to keep their lives on track.  The father was once a philanderer but he is now little more than a dirty old man, molesting his female customers, flirting with young women in the street and sneaking away from his wife’s bedside to pay a visit to the aged peasant he has been shagging since before he met his wife.  The son, meanwhile, does little better.  We see him dragging a young woman into a tawdry ‘hotel de passe’ – the kind you rent by the hour – while his wife reacts to the imminent death of her mother-in-law with more humanity than the rest of the family combined.  Not only does she keep the father’s spirits up by flirting with him, she also helps out in the shop and, while going through the older couple’s love letters with her husband, breaks down and cries.  She cries not only for the extinction of a life but also out of recognition.  Recognition that her life is coming to resemble that of the old woman : She is a loving and devoted wife to a lazy and unfaithful husband who tries to put a brave face on things whilst being slowly consumed by her jealousy and failure to take control of her life. 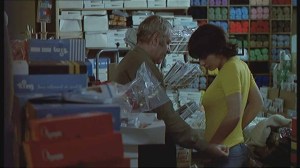 Indeed, the disease that causes the paralysis and objectification of the old woman is just the final physical manifestation of a psychological process that had been going on for years.  In the scene in which the woman and her son have lunch, the son reminds her of her old fits of jealousy and how she would lash out even at images reminiscent of her husband’s dalliances.  The old woman smiles wistfully… those years of angry jealousy are behind her, now she can live with her husband’s infidelity.  For her entire life, the woman was treated by her husband as something to be ‘handled’ and worked around.  After years of battling it and fighting back she gave up and became simply a part of the furniture.  To move from that to a disembodied head that requires feeding is not much of a leap at all. 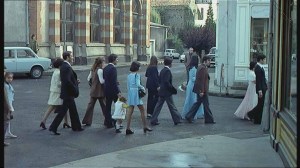 The cinematography in La Gueule Ouverte is surprisingly low key.  Néstor Almendros (Sophie’s Choice, Blue Lagoon, Kramer vs. Kramer) shoots the film in a style that is little more than functional, however, this deliberate lack of sophistication serves mainly to highlight the sections of the film where the images do take precedence over words.  For example, there is an early scene in which a wedding party trails down the road.  This scene will later be revisited in an extraordinary sequence in which the camera creeps round a corner, taking in the mother’s funeral procession.  Also startling is the final shot of the film. 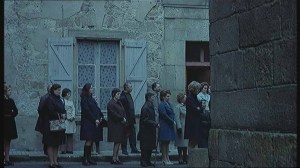 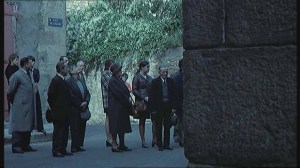 La Gueule Ouverte’s lack of sentimentality presents itself as a ruthless focus upon the present.  Its characters want to get on with their lives and deal with the stuff in front of them and they do that by trying not to look backwards.  To look backwards is to remember the mother for what she was.  To look backwards is to remember mistakes from the past.  To look backwards is to remember decades of infidelity and deceit.  When the young couple leave following the burial of the mother, they cannot get away quickly enough.  They try to take the father with them but he refuses, hypocritically remorseful after the death of his wife he is, at least for now, stuck in the past.  The pull of the past is always present and Pialat beautifully captures this in the final shot : As the car drives away, the camera keeps looking out of the back window.  No matter how fast you move forward, you simply cannot escape the attraction of the past.  However, the shot also seems to suggest that while you may very well choose to focus only upon the present and future, ultimately all that is before you will ultimately end up behind you.  As in Passe ton Ban D’Abord, the young are destined to repeat the mistakes made by previous generations… what was past will be again and it’s no more possible to escape that than it is to escape your own death. 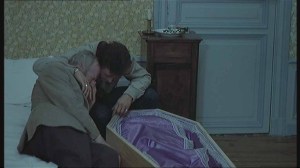 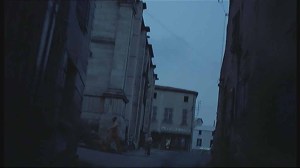