As with most of the big names of the New Wave, Claude Chabrol began his cinematic career as a critic for the Cahiers du Cinema.  This critical career culminated with the release in 1957 of a book about the films of Alfred Hitchcock.  This attraction to Hitchcock’s style and subject matter followed Chabrol when he ‘crossed the aisle’ from criticism to film-making and his early output quickly earned him a reputation as the ‘French Hitchcock’ and the influences can also be seen in the film I am going to be writing about today.

Que La Bete Meure (1969) was adapted by a novel by the British poet Laureate Cecil Day-Lewis.  It is the story of a man who tries to avenge the death of his son by tracking down the man who ran him over.  After seducing the man’s sister-in-law and infiltrating himself into the killer’s family, the grieving father discovers that the family have no more love for the thuggish monster than he does.  The scene I want to talk about is the extraordinary opening sequence leading up to the death of the child and the father’s discovery of the body.

The scene opens with a blurry shots that quickly snaps into focus on a young child playing on a rather desolate beach.  The camera zooms out and shows that the child is utterly alone and has been for quite a while.  There are no footprints in the sand.  No parents looking on benignly from a nearby café.  In fact, the parents are conspicuously absent, neatly foreshadowing what will come to pass. 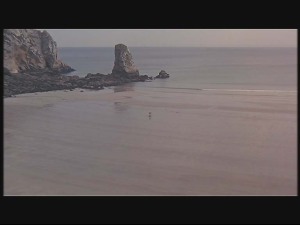 Alone on the Beach

Next, we see the car.  A mustang.  Moving fast and accompanied by what can only be described as a funeral dirge.  The piece is Vier Ernste Gesänge by Brahms, sung by the post-War contralto Kathleen Ferrier.  A singer noted for the particularly dark timber of her voice, a timber reportedly due to a birth-defect.

Chabrol cuts back and forth between the child and the car.  We see the child moving up the beach and the car eating up the road and immediately a sense of tension is created.  These two bodies, even though they don’t know it yet, are on a collision course.  As the scene progresses, it becomes more and more tense.  Shots from the inside of the car show the changing countryside and we expect the child to suddenly spring into view but we do not know when. 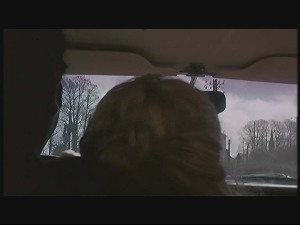 The view from Inside the Car

The cutting back and forth is accompanied by the music fading in and out, as though it is playing on the car’s radio.  As with the absent parents on the beach, this is another act of foreshadowing that serves to ramp up the tension.  The dirge is not for those already dead, but for those that are about to die.  Chabrol lays down further morbid imagery as the village is filled with old churches, local shops called “The Pope” and a tolling bell.  The absurd Gothicism of it all is almost unbearable but it is precisely the heavy-handedness of the imagery serves to increase the tension. 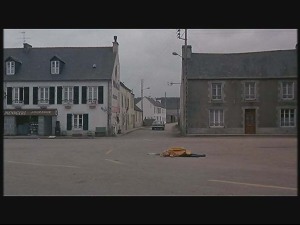 When the car finally hits the child it is dramatically downplayed.  There is no slow-motion.  No screaming child.  No death-rattle as the child closes its eyes for the last time.  It is impersonal… just another bump in the road.  The only emotional reaction comes from the woman in the car and even then the driver mutters “Ta Gueule!”… “Shut it!”.

We then move into a fixed shot.  It could have been the last thing the child saw.  The camera points up towards the grey sky, the old church peeks into shot on the lower left-hand side.  The camera does not move but people move in and out of shot.  By not moving the camera, Chabrol is making it clear that he does not want us to focus upon the locals’ reaction.  He wants us to focus upon the final thing the child saw.  That is the object of the scene.  That last minute of life. 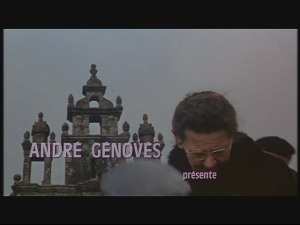 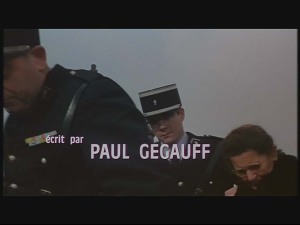 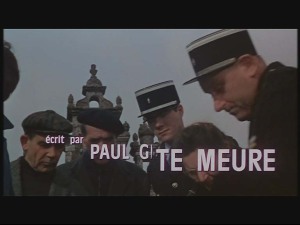 Eventually, with surprising slowness, the child’s father comes into shot, he picks up the child and howls his anguish and sadness.  Suddenly the emotional impact of what has just happened hits us.  By downplaying the moment of the child’s death and focussing our attention upon what happened immediately after, Chabrol has kept all of that built up tension in a holding pattern.  Suddenly, with the arrival of the father, that tension is released.  The father is a simulacrum of the audience’s sense of tension, his howl of anguish could almost be fuelled by the breath of our collective exhalation.  And because the father is the audience’s simulacrum, he is instantly sympathetic even though we know nothing about him other than the fact that he shares our shock and horror and what has just happened. 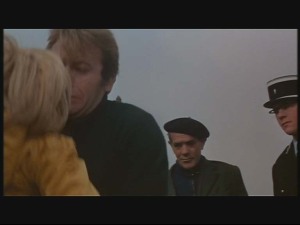 Jean Cocteau once said that for some people, style is a way of saying something simple in a very complicated way.  For others, it is a way of saying something very complicated in a simple way.  Given the ease with which Chabrol is capable of making us emotionally invest not only in the child’s death but also the father’s struggle, it strikes me that it is the second of Cocteau’s remarks that is closer to the truth.  Dialogue, character and plot ; in cinematic terms, all of these are just long-winded ways of communicating what a great director can say with visuals alone.