Falsely accused of murdering her boss, Lisa (Diane Kruger) is sent off to prison.  As the appeals process dries up, Lisa drifts into a dark depression and attempts suicide.  Realising that he is losing a wife and his son a mother, Julien (Vincent Lindon) realises that his current existence is untenable and devotes everything he has to planning and executing an escape attempt that will allow the family to be re-united, albeit for a life on the lamb.  Framed initially as a family drama in which Julien has to deal with the repercussions of an imprisoned wife, Anything For Her then mutates into an introspective crime drama as a teacher decides to reinvent himself as a criminal mastermind.  The critical reaction to the film has tended to snag upon how unbelievable it is that a man in such a position would decide to break his wife out of prison, but this is to miss the point.  Anything For Her (Pour Elle) is an interstitial work that exists on the fringes of the traditional drama and the crime genre.  If it fails as a film (and I think ultimately that it does) it is not because of its crime elements or its interstitiality, it is because of the fundamental weakness of its dramatic elements. 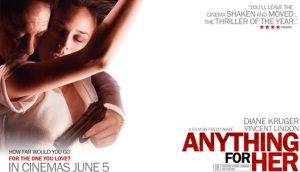 To the extent that Anything for Her is a crime film, it works incredibly smoothly.  After deciding to spring his wife from prison, Julien makes contact with an author who wrote a book about life on the lamb.  This scene is pure noir from the smoke-filled atmosphere of the betting shop to the mottled complexion and snazzy suit of the old con (Olivier Marchal) :  The suit speaking of a man who carries himself with pride.  The complexion speaking of a man who has been worn down to the nub by a cruel world.  There is also a sense of fore-shadowing here.  In order to free his wife, this is the man that Julien must become.  Of course, the con admits, he was never caught.  He gave himself in.  Also impressive is the film’s sense of space.  Julien and Lisa’s home is a modest but warm flat, as is the home of Julien’s parents.  These small rooms completely different to the angular concrete fortress that Lisa now finds herself in.  The film’s final third also shows Cavaye to have some skill as a thriller director as the couple’s escape attempt hangs in the balance to the very last; each correct decision is countered by astonishing intuitive guess work by the detective tracking them.  Each correct guess by the detective is in turn countered by a lucky break for the couple.  The progression of scenes is simple but the pacing is immaculate, the ideas good and the ultimate outcome always in doubt.

Ideally, the film’s dramatic elements would focus upon two areas.  Firstly, it would detail exactly why it is that Julien feels that he cannot go on and why his reaction to this is to break his wife out of jail as opposed to any of the other courses of action that a man in his position might take (e.g. turning his back on his wife and starting a new life or starting a political campaign to get the case re-opened).  Secondly, Julien’s course of action decided upon, it would detail the psychological changes a teacher would have to go through in order to become the criminal he needs to be.  Anything For Her fails on both accounts because its characterisation and dramatic currency are overly generic.

For example, We are introduced to Lisa and Julien as a very loving couple.  No more than any other couple you would think, but loving none the less.  When Lisa is taken away, the film relies upon those early scenes to do a lot of heavy lifting.  Why does Julien not try to make a new life for himself?  because he loves Lisa.  Why does he obsessively visit her every week?  because he loves Lisa.  Because the sentiments are so generic, we really learn very little about either Julien or Lisa.  Similarly, when Lisa becomes suicidal, no real explanation is provided.  We never see her being bullied.  We never get the impression that the prison is particularly cruel.  It is just that Lisa loves Julien and Oscar but cannot be with them.  And yet she want to commit suicide?  In effect, Lisa feels more like a macguffin.  Her suicide attempts existing only to force Julien into a rash course of action.  For a film that frames itself as a drama, such an instrumental approach to characterisation feels shallow and simplistic.

The same lack of depth applies to Julien’s transformation into a criminal.  The film repeatedly tells us that not everyone can be a criminal and even those people who are criminals tend to struggle with living on the lamb.  And yet Julien takes to it relatively easily.  Instead of explanations, the film will insert an image of Oscar sleeping or of Lisa weeping.  Because Julien loves Oscar and Lisa he must do something incredibly dangerous, costly and transgressive.  The only time when Anything for Her shows a willingness to engage with the complexities of human emotion is when it is on safer genre ground in memorable set pieces such as Julien’s tense robbery of a drug dealer and his disastrous attempts at finding illegal ID papers, but once the tension recedes and the film returns to the business of drama, none of the feelings engendered by these disturbing events are ever explored.  Julien remains a closed box throughout the film.

Anything For Her does not fail because it is unbelievable that a man might try to break the woman he loves out of prison.  It fails because Julien and Lisa are fundamentally unbelievable and under-written characters.  With such lack of depth, Julien could have simply tried to hire a better lawyer and the results would have been disappointingly unbelievable.