It is difficult enough to try and capture the meaning of a book or a film, but how about attempting to distill the essence of a particular time or a particular place?  How about an entire city?  Travel writing is an attempt to do exactly this.  To take the experience of a particular place at a particular time and distill it down into the collection of sounds and symbols that make up the written word.  Thought of in these terms, the task seems onerous. After all… books are creatures of words.  Even films are beings of language once you bear in mind their scripts, their budget meetings and the attempts by directors to tell actors and technicians alike exactly what they want from a particular scene.  To write about the meaning of words is one thing but to write about something bigger than language is another.  Something like the city of London.

Patrick Keiller’s London is a combination of documentary film and extended essay.  Its un-named narrator (voiced by Paul Scofield) tells of his cross-London walks and expeditions in the company of a quixotic academic known only as Robinson.  Robinson has a very particular vision of London.  A vision he desperately wants to be true, and if it cannot be true then it must be about to come true.  But as the pair cross and re-cross the city of London along with its suburbs, financial districts, parks and run-down estates, it soon becomes clear that London will not conform to any single vision and that this refusal to conform is the very essence of the Mother of All Cities. 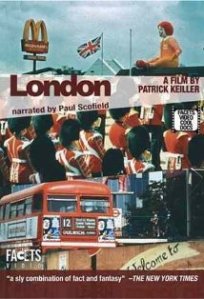 London seems to start at a time of turmoil.  But honestly, is there any other kind of time?  Made in the run-up to the 1992 General Election, the film begins by painting a picture of a city that is slowly shaking itself to pieces under pressures both external and internal.  Robinson comments that London is a city ruled by a sub-urban government who use crime, pollution and decaying infrastructure to punish Londoners for preferring the life of the big city to the life of the shires.  The IRA bombing campaign taking place at the same time seems to echo this sense that London is a city that is somehow profoundly broken or, to put it more organically, unwell. 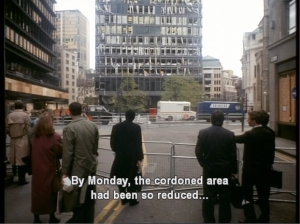 As an academic working in the field of literature, Robinson’s attempts to come to grips with the spirit of the city are profoundly literary in character.  Indeed, Robinson expresses a profound kinship with romantic writers such as Rimbaud and Baudelaire whose writings are quoted (sometimes at surprising length) throughout the film.  Romanticism was an artistic movement that was both generated by and opposed to the perceived disenchantment of the world caused by the Enlightenment and the procession of scientific ideas and bureaucratic modes of governance that followed in its wake.  As a Romantic studying London, Robinson initially sees his task as one of re-enchantment prompting him to flirt with a number of fantastical notions including talking fence-posts, spontaneously appearing streets, sacred bus routes, floating magicians and academic time travel.  H.G. Wells, Conan Doyle, Edgar Allen Poe, conspiracy theories and spy stories are all recognised and warmly embraced as fellow travellers.  At one point, Robinson announces that his task is to re-invent the city of London as though the 19th Century had never happened, stripping the city free from its reaction against the French revolution. 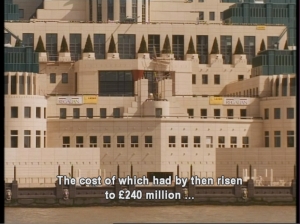 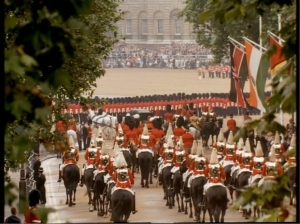 Quite what kind of city this might yield is not initially made clear but Robinson’s ideals prompt him and the narrator to begin flirting with rhetorics of colonisation as they try to paint London as the victim of some external cultural force such as the tory government (sub-urban), the royal family (militaristic and prone to taking up lots of space in central london) and financial institutions (their building sites indistinguishable from terrorist bomb damage) but regardless of where they look or how hard they search, Robinson and his friendly narrator find it impossible to find any trace of a real and romantic London trapped beneath an establishment yoke. 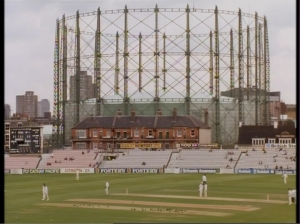 Finally, a breakthrough is made when Robinson reverses his notional take.  London is not a city where communities or artists flourish in Ikea cafes amidst the brutality of commerce and the isolation of damp grey streets and deserted parking lots.  London is a city for the lonely.  As Alexander Herzen puts it in his memoirs My Past and Thoughts (1868) :

There is no town in the world which is more adapted for training one away from people and training one into solitude than London.  The manner of life, the distances, the climate, the very multitude of the population in which personality vanishes.  All this, together with the absence of continental diversions, conduces to the same effect.  One who knows how to live alone has nothing to fear from the tedium of London.  The life here — like the air here — is bad for the weak, for the frail, for one who seeks a prop outside himself, for one who seeks welcome, sympathy, attention.  The moral lungs here must be as strong as the physical lungs, whose task it is to separate oxygen from the smoky fog.  The masses are saved by battling for their daily bread, the commercial classes by their absorption in heaping up wealth and all, by the bustle of business.  But nervous and romantic temperaments, fond of living among people, fond of intellectual sloth and of idly luxuriating in emotion are bored to death here, and fall into despair.  Wandering lonely about London, I lived through a great deal.  In the evening, when my son had gone to bed, I usually went out for a walk.  I scarcely ever went to see anyone.  I read the newspapers and stared in taverns at the alien race and lingered on the bridges that cross the Thames.  I used to sit and look, and my soul would grow quieter and more peaceful.  And so for all this, I came to love this fearful ant heap where every night, 100,000 men known not where they will lay their heads and the police often find women and children dead of hunger beside hotels where one cannot eat for less than £2.

London’s indemic sense of existential isolation is perfectly demonstrated by the impotence of the attempts by organised labour to lobby parliament and prevent the freshly re-elected Major government from closing yet more coal mines.  People gather in London.  They even express solidarity.  And yet, when the day is over, they return home to be alone.  The solidarity fades with the setting sun and the night brings only darkness and solitude.  As Keiller puts it :

For Londoners, London is obscured.  Too thinly spread, too private for anyone to know.  Its social life invisible, its government abolished.  Its institutions at the discretion of either monarchy or state.  Or the City where, at the historic centre, there is nothing but a civic void, which fills and empties daily with armies of clerks and dealers, mostly citizens of other towns.  The true identity of London, he said, is in its absence.  As a city, it no longer exists.  In this alone, it is truly modern.  London was the first metropolis to disappear.

The meaning of London is that, much like the world, it is a cavernous space empty of all meaning.  But the size of this space and the emptiness of it means that it can contain many things.  One can build in it.  Every citizen of London is utterly alone and yet, if they are willing to accept this, they can be free.  Free to see wizards and talking fence posts.  Free to see Catholic conspiracies and militaristic Royal oppression.  Free to see a fat and indolent rural conservative party sitting in Westminster like some bloated third world dictator, the bling of their military regalia glinting with the reflected glow of their bleached white teeth.  To be a Londoner is to stare into the void every single day.  To be a successful Londoner is to recognise that void and build one’s own meanings into it.  London is not a city that welcomes the socially minded.  It is a city for and by the merrily isolated and hermeneutically inclined. 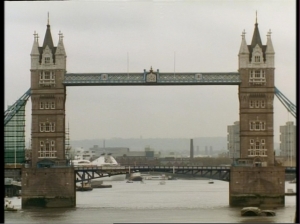 The London you see 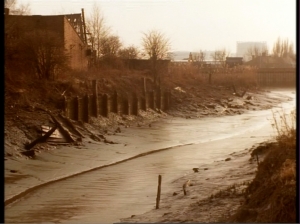 The London you seldom see 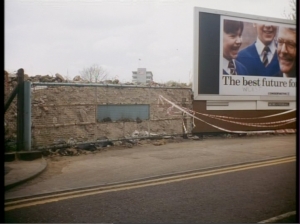 The London the Conservative party would like to see

London is an oddly poetic film visually speaking.  Keiller frames Scofield’s drily humorous and occasionally surreal narration with shots of London and its surroundings.  Street corners.  Markets.  Empty lots.  But again and again he keeps returning to shots of the surface of the Thames.  Water flowing.  Water mottled by raindrops.  Grey-brown stillness given shape by chaotic natural phenomena that are both utterly unpredictable, utterly directionless and eerily beautiful.  That is the essence of London. 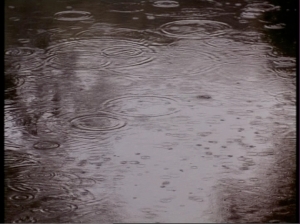 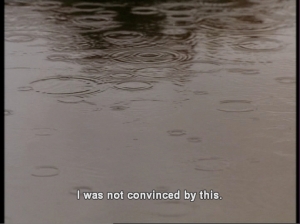 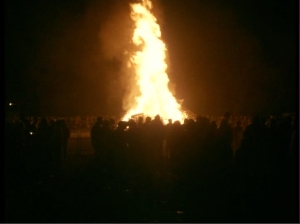