Back in 2006 an odd little programme snuck out on BBC Four.  The programme was called A Pervert’s Guide to Cinema and it featured nothing but the hirsute and lisping Slovenian philosopher Slavoj Žižek talking animatedly about his favourite films.  The director Sophie Fiennes did not impose any limitations upon Žižek’s ramblings: She did not ask him questions.  She did not impose themes.  She did not even demand that the films Žižek dealt with be ordered chronologically or in any kind of order that might render his analyses more accessible to a lay audience.  She simply let him get on with it.  Her sole input seemingly being at the level of mis-en-scene, ensuring that when Žižek spoke of Hitchcock’s The Birds (1963) he did so sitting in a motorboat crossing a harbour, or that when he spoke of Francis Ford Coppola’s The Conversation (1974), he did so from the bathroom and balcony of the same hotel that appeared in the film.

In the four years since A Pervert’s Guide To Cinema first aired, it has come to be seen not as a documentary about film or a series of cleverly shot televised lectures and more as an experiment in documentary film-making.  The experiment involved making a documentary about the arts without seeking to explain either the act of creation or the fruit of that process.  By allowing Žižek to chat about his favourite films Fiennes was distancing herself from the obsession with biography and context that dominates cinematic depiction of the arts.  A Pervert’s Guide to Cinema was not a film about Žižek or a film about films, instead it was a cinematic appercu of the act of artistic creation itself.

In 1992, Anselm Kiefer took over a disused silk factory in the departement of Barjac in Southern France.  Over a period of nearly ten years, Kiefer transformed the industrial ruins first into a gigantic studio space and then into a living and breathing work of art in its own right.  An immense installation known as a Gesamtkunstwerk.  This installation comprises an underground maze, an amphitheatre, vast paintings and a series of towers.  The Gesamtkunstwerk fuses the logos of industrialisation with the mythos of Biblical and Jewish imagery to create what can be interpreted as a commentary upon the Holocaust.  However, anything as crude as an interpretation sits uncomfortably on the images that Fiennes provides us with, particularly in the hauntingly scored and exquisitely shot wordless walking tour sequences that bookend the film.  These are not images that are supposed to make sense to us, they are simply there.  The act of interpretation is a vulgar after-thought.  An unwanted interloper.  A pathetic scrabbling for truth against the sheer scale and weirdness of Kiefer’s vision.  A scale so pulverisingly huge that it may as well take in the entire universe.

Portrait of the Artist

The unwanted nature of interpretation is beautifully established in a scene in which Kiefer is interviewed by a German art critic.  The critic, clearly intimidated, offers up a series of hypotheses as to what Kiefer’s art may be about only for Kiefer to respond with a series of bizarre and rambling tirades seemingly designed not only to put the critic in his place but also to render his own artistic output as terrifyingly inaccessible as possible.  When confronted with a fact, Kiefer simply denies it.  When confronted with a precise idea, Kiefer expertly evades it.  When confronted by a woolly conjecture, Kiefer twists it into incoherent pseudo-philosophical nonsense.  The installation is not there to be decoded, it is there to be experienced and this is what Fiennes allows us to do. 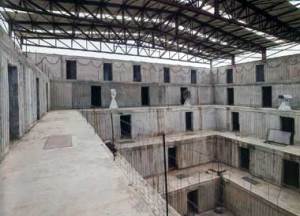 By refusing to provide us with any context or critical insights, Fiennes effectively cloaks Kiefer’s creative processes in a compelling aura of mystery.  At one point we see him breaking glass and carefully selecting a shard of glass to place in the pocket of a child’s dress that he has glued to a massive canvas and daubed with kabbalistic symbols.  At another point we see him mocking up a model of the vast towers he assembles at the end of the film and his selection of materials and shapes seems to be guided by no comprehensible mechanism.  There is no message here.  There is no aesthetic formula.  There is only creation.

Were one to happen upon the now abandoned studio in Barjac one might be tempted to assume that all of these acts of creation were somehow the result of entropy or random vandalism.  The towers would be nothing but the bones of some once larger construction.  The amphitheatre the remnants of a testing laboratory and the paintings and sculptures a hybrid of decaying corporate art and objects stacked for transport and then left to rust.  Indeed, Barjac gives off the same vibe of second-hand humanity as many of the photos from Urban Exploration websites : All of these objects once meant something and served a purpose but now they are just disconcerting and puzzling junk. 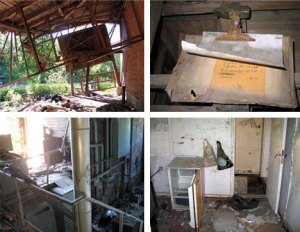 To watch Over Your Cities Grass Will Grow is to be thrown into the mindset of a pre-scientific thinker.  We look at Barjac and while we can detect some agency at work in the chaos of tortured semiotics, we can only speculate as to what the motivation of that agent might have been.  Fiennes casts Kiefer as the psychotic sibling to the tyrant of the Old Testament — an utterly inscrutable creature of immense creative power who remains utterly unaccountable to the minds of mortals.  One cannot understand.  One cannot explain.  One can only experience.