You don’t understand me.  Nobody does.

When the dust has settled, the books have been closed and the time has come to write the intellectual history of the later stages of the twentieth Century, Historians will speak of two separate schools of thought.  Born on opposite sides of the world and yet joined at the hip.

From America, we have the cult of the individual, born of political ideology, carefully nurtured by a fledgling advertising industry and sanctified by a generation of psychologists, therapists, counsellors and psychoanalysts.  This school of thought stresses the importance and the potential of the individual in the face of endless pressure from the faceless masses.  Masses, of course, composed of equally heroic individuals.  In such a climate an act of individualisation, no matter how insignificant or trifling, is heroic.  What brand of coffee do you buy?  Are you a Mac or a PC?  Did you take in the BFI’s Ozu retrospective instead of going to see Avatar?  Under this world-view, the individual is not merely a building block of a larger society, he is an irreducible force.  A spiritual, political, moral and commercial monad.

From Europe, we have the phenomenology of self.  The Second World War swept away all certainties, even those of the Enlightenment.  There was a need to return to source.  To build again.  Where better to start than Descartes’ maxim?  The ultimate philosophical slogan : I think therefore I am.  We cannot trust old certainties, all that we know is that we are and that we think.  But where the Enlightenment used this as foundation stone for the construction of a new world of knowledge, the post-War philosophers took it as a boundary.  A limit.  An end.  And so emerged a need to fetishise the cogito.  To stress the importance of the subjective not only to philosophy but to our conceptions of self.  Under this school of thought, we are imprisoned within the walls of our own subjectivies.  Not only alone but utterly distant from those around us.  Our experiences and feelings suddenly so different to people of the same class, the same up-bringing and the same education that we might as well be speaking a different language.  Other people are utterly alien.  As Sophia Coppola’s Lost in Translation demonstrates, we can now sit in a crowded Japanese bar and be utterly alone.

So you see… nobody understands me.  Or you.  Not really.

Tom Ford’s mesmerising debut A Single Man – an adaptation of a 1964 novel by Christopher Isherwood – is an examination of this school of thought.  Its title refers not only to the marital status of its protagonist, but also to the pervasive idea that our psychological states are somehow unique and that this uniqueness separates us from other people.  The reality, of course, could not be further from the truth.

George (Colin Firth) is drowning.  He is a middle-aged gay British college professor living in California and he has recently lost his partner to a car accident.  He tells us that waking up every day is painful.  We know this because we see his dreams.  Dreams in which he gets to kiss his dead lover.  A final good-bye denied him by his lover’s family who refused to allow George to attend the funeral despite the couple having been together for sixteen years.  George tells us that it takes a while for him to become George.  Every morning he wakes up, dresses carefully, reads while sitting on the loo and has breakfast.  Disruption to this regime causes him great displeasure.  He is held together by this routine.  This routine is about to end.  We know this because we see George unlocking a drawer and pulling out a gun.  Like Chekhov’s eponymous firearm, we know that the gun will be central to the film.  The second we see it, we know that George is living on borrowed time.  Ford drives this point home by showing us clocks, assailing us with loud ticking noises and allowing us to overhear snippets of the news in which the Cuban missile crisis is discussed in worried tones. 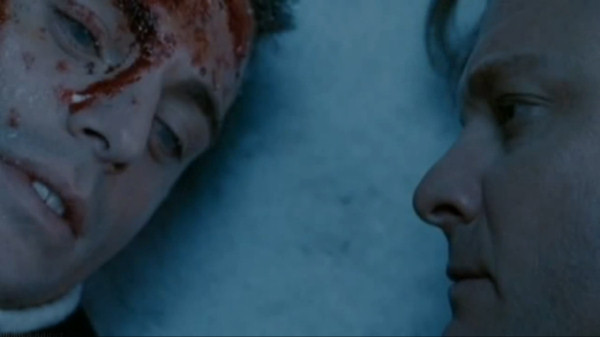 Being a creature of habit and routine, George is planning an orderly death.  He writes letters to his loved ones, sorts out his life insurance, cleans out his desk and takes out some cash so that he can leave something to his house-keeper.  He even agrees to have a final dinner with Charley (Julianne Moore), a former party girl and lover who is now easing gracefully into an old age defined by gin and past glories.  But George’s last day does not go as expected…

Ford weaves an intriguing if somewhat overly literal visual web.  The early scenes establishing George’s emotional state are interspersed with images of him literally drowning.  When the moment of realisation eventually comes, we see him breaching the surface and sucking in a much-needed lung-full of air.  George’s status as a homosexual makes him both visible to bigots and invisible to the lazily prejudiced and so we see him living in a house composed of glass and wooden beams.  From some angles he is naked, from others he disappears.  Ford’s visual literalism is most obvious in the moments in which a Single Man’s colour palette shifts from washed out greys and browns to vibrant blues and reds.  When George is miserable, the colours are dull.  When George has an experience that reminds him of the good things in life, the colours bloom like hot house flowers.  Pretty male students suddenly have eerily blue eyes and dazzling pink lips.  Cigarettes shared with handsome hustlers herald parking lots cloaked in weird oranges and purples.  A pretty little girl inquiring about George’s welfare sees her turquoise dress turn almost neon while her hair is the colour of cheap gold and her cheeks that of bruised plums.

These moments of warmth just keep coming.  On the day in which George has decided to kill himself, people start throwing themselves at him.  Everywhere he looks, there are opportunities for happiness, for growth, for new beginnings.  In fact, it is almost as though the world is conspiring against George’s death as every meeting he has provides him with a life lesson.  Gradually coaxing him back from the brink to a much happier place.  After a while, the life-changing experiences come so thick and fast that George’s resolute refusal to experience his bourgeois ‘moment of clarity’ is actual frustrating.  As the impossibly beautiful Kenny (Nicholas Hoult) throws himself repeatedly at George I could not help but grown “Oh for fuck’s sake kiss him!”.  The sense of frustration that dominates A Single Man’s final act is a reflection of how familiar George’s problems are to us as cinema goers.  The film’s emotional arc is not so much etched into every scene as it is spray-painted in gigantic neon letters, and therein lies the film’s true genius. 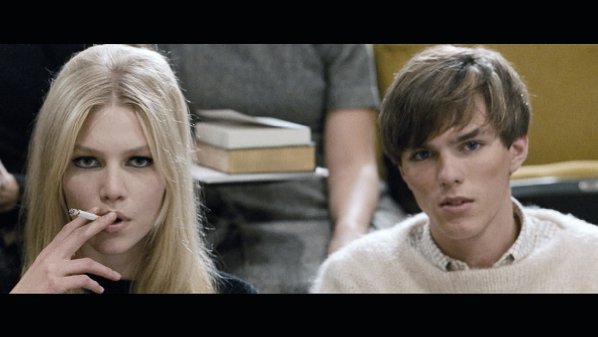 The Beauty of Youth and “The Future”

The film paints George as a basically sympathetic character.  He’s witty.  He’s wise.  He’s a member of a minority at a time when said minority lived its life cowering behind closed doors.  He’s even portrayed by the eminently likeable Colin Firth.  Ford’s script is undeniably affectionate and the series of life-changing experiences George has give the film an amazing sense of warmth.  But beneath the warmth lies a beautiful coldness.  A surgical contempt for its central character.

When George goes to dinner with Charley the pair get drunk and Charley puts her foot in it, betraying her prejudice by suggesting that George’s gay relationship had somehow been unreal.  George immediately flies off the handle and confronts Charley over her sense of self-pity.  He calls her a drama queen.  He belittles her demand that the world pander to her.  He points out how fortunate she really is.  Is George talking to Charley or to himself?  Who is the real drama queen here?  As regrettable as it is to lose a partner, it is a loss that people experience every day and they go on.  There is nothing unique in George’s melancholy.

When George shares a cigarette with a beautiful hustler, he comments upon the colours of the LA skyline.  The hustler sniffs and points out that the reason for the colours is the smog in the air.  Sometimes beautiful colours are caused by unhealthy things.  Again, is this about the skyline or about George?  all day long, George has been having little moments of warm epiphany in which colours seem impossibly vibrant.  Are these little moments unique or are they merely the sentimental technicolorisation of the world?  Beauty and warmth are there is the world for all to see.  They are not there just for George.

When George takes Kenny home, the pair discuss philosophy and Kenny points out how trapped and alone he feels.  He even gives a neat little speech encapsulating the European school of thought I mentioned in my introduction.  But Kenny is just a student.  His words are not the wisdom of a life well lived, they are store-bought words from store-bought books.  Anyone can come to these realisations.  They are not special.  They are not wise.  They are not unique even though they are the final lynchpin of George’s desire to commit suicide.

Beneath the warm hallmark glow, A Single Man is quite brutal in its depiction of George as a foolish old man who has more to live for than most people.  We can all feel alone and misunderstood sometimes but the reality is that these feelings are so ubiquitous to the human condition that they are self-refuting.  We are all alone and misunderstood and as a result we are open books to each other.  A Single Man’s ending is a reminder of the fact that we are not the gods of our own little universes.  Life does not depend upon ‘moments of clarity’.