One of the joys of discovering other cultures is realising, in a somewhat Whiggish manner, where they stand on the public debates that fill the public sphere of one’s own country.  What are their attitudes towards gay marriage?  Do they still assume that everyone will get married and have kids?  Do they have a similar intolerance for racism?  More often than not, particularly in the West, this is simply a matter of chronology : Some places are ahead of ‘the times’ while others are ‘behind’ them.  However, leave the gilded circle of what was once Christendom and you find cultures with attitudes so different to ours that they actually shed some light on the buried assumptions of our own debates.

One such culture is that of Thailand.  Thailand’s attitude towards gay rights is genuinely fascinating.  Since the military coup of 2006, Thai government has been edging closer to using a third gender for administrative purposes.  A third gender designed to accommodate the Kathoey, a caste of Thai society that we tend to refer to either simplistically as transwomen or, with the teeth grinding that accompanies potential political incorrectness, ladyboys.  In truth, “Kathoey” is a much broader category than male-to-female transsexual.  Originally, it was coined to describe intersexuals but since the mid 20th Century onwards, it has come to designate everything from post-operative transsexuals to effeminate gay men.  This category of person has existed for a long time in Thailand and, thanks to Buddha’s teaching of tolerance, they are not mocked or physically attacked in the way that TG people can be in the West.  However, they are also victims of terrible discrimination and frequently find themselves working in the ‘entertainment’ industry because people refuse to hire them for other jobs.  Even if they are university graduates.  I mention the Kathoeys as, for a long time, the Kathoeys served to mask the existence of Thai homosexuality.  In Thai culture, sexuality is defined largely in terms of gender and the idea of two masculine men having sex or a relationship simply did not figure.  It was not a common mode of identity.  Indeed, in the late 70s there were only ten gay entertainment venues in the Patpong area of Bangkok.  A decade later, there were over a hundred such places spread out across the country.  In a sense, homosexuality – as we in the west understand the word – only really appeared in Thailand in the 1970s and since then it has attracted more than its fair share of ill-treatment from officials who are more than happy to crack down on a new mode of being.

It is against this rather alien and seemingly conflicting set of cultural attitudes that Apichatpong Weerasethakul makes films such as Tropical Malady (a.k.a. Sud Pralad), a lusciously atmospheric film comprising a a beautifully chaste love story and a fable in which one of the young men turns into a tiger.

One of the most striking things about Tropical Malady is the playfulness of Apichatpong Weerasethakul.  In general, when one talks of playful directors one in fact means wilful perversity of the kind demonstrated by such habitual audience baiters as Michael Haneke and Lars Von Trier.  Weerasethakul, however, embodies a different kind of playfulness.  The kind of playfulness that comes from complete technical control and a desire to display it.  Weerasethakul is a director who positively oozes creative confidence.  We first encounter this in the opening sequence.  A flawless exercise in faux documentary stylings in which a group of patrolling soldiers comes across a body.  Chattering away to each other, the group cheerfully pose for photos with the corpse (doubtless for their MySpace pages) and then set out for the local village.  As the group disappear into the jungle, music begins to play and the camera slowly moves forward.  The clash of styles is subtle and yet powerful.  It is almost as though, having allowed us to settle down into a realistic film, Weerasethakul suddenly decides to pull the rug out from below us.  All is not as it appears…

Travelling from the outside in, or the inside out?

We soon learn that the soldiers had been sent out to investigate a series of tiger attacks around a village in the jungle.  While bunking with a local family, soldier Keng (Bonlop Lomnoi) takes a shine to the son of the family, a somewhat directionless youth named Tong (Sakda Kaewbuadee).  When Tong goes into the city to look for work (he dresses as a soldier in the hope that it will allow him to get his foot in the door) he runs into Keng and the pair strike up a friendship.

Weerasethakul presents modern Thailand as a deeply romantic and sensual place.  When the soldiers pose with the corpse they talk of sending the picture to their girlfriends.  As they walk back to the village, they flirt with the female radio operator.  When Keng and Tong run into each other in town, Tong is reacting somewhat ambivalently to a very pretty girl who is flirting with him on the bus.  Against such brazen sensuality, Tong and Keng’s relationship comes across as incredibly demure.  Keng gives Tong a Clash tape and teaches him to drive a truck and takes him out places but Tong is quite a remote figure.  As the film progresses, Keng starts to push Tong harder and harder, but Tong remains strangely evasive.  In one intensely erotic scene, Keng touches Tong’s knee in the cinema and Tong reacts by playfully crossing his legs, preventing Keng from removing his hand.  Tong seems so innocent that he is almost childlike.  He remains distant from Keng and yet Keng keeps returning.

If this were a western film one would speak of the pair being separated by a closet door : Keng refuses to open the closet and Tong refuses to exit it and yet the two clearly feel some kind of connection, a connection poorly hidden beneath broad smiles and innocent pleasantries.  In fact, Tong’s behaviour is so eccentric that it appears to only be explicable if viewed through a lens of self-denial or delusion.  Even when Keng grabs Tong’s hand in order to smell his fingers after urination, Tong responds not by kissing him or playing along with the advance, but by licking his hands like some kind of pet.  Is it all a game for him?

The film then changes gear.  We are told of a Thai folk tale in which a powerful shaman was said to live in the forest and assume the shapes of the animals.  This sets up Keng being sent into the forest near Tong’s home in order to hunt down the man-eating tiger who killed the man at the beginning of the film.

Not doing too well

Keng’s time in the jungle weighs heavily on his mind.  Cut off from base by a faulty radio he wanders around looking for the tiger only to realise that, in fact, the tiger may well be stalking him.  Before long, he starts to lose his mind, he hears the monkeys speaking to him and warning him of the tiger who is both hungry and lonely.  Indeed, initially we do not see the tiger but we do see a naked and upset Tong.  The suggestion is that Tong is the tiger, both literally and symbolically.  This strange and beautiful fable takes up half of the film’s running time and is almost devoid of dialogue.  Its role is to explain the strangeness of the film’s opening half.  To explain Tong’s strange behaviour.  As though some truths are so huge or ancient that they can only be expressed through the telling of stories. 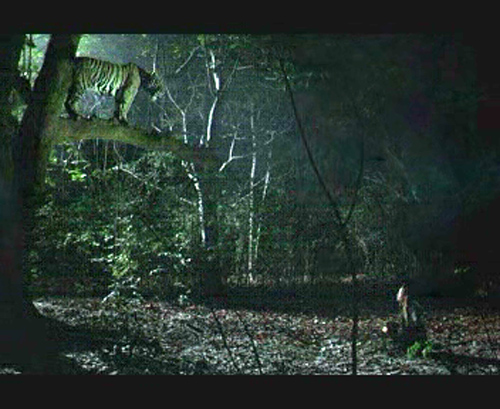 A simple reading would be that Tong and Keng are in love but that, because he is a shape-shifter, Tong refuses to return Keng’s affections.  His child-like innocence is both evasive and a result of the savagery of his alternate state.  His nature is divided, split into two.  However, while this fantastical reading fits Tropical Malady’s narrative, it is rather literal minded.  Tong appears to turn into a tiger because he does turn into a Tiger.  Such a simple-minded reading strikes me as deeply unsatisfactory.  Weerasethakul is a playful director whose careful invocation of myths and legends from his native Thailand scream out for a deeper and more socially aware interpretation.  So here is mine… 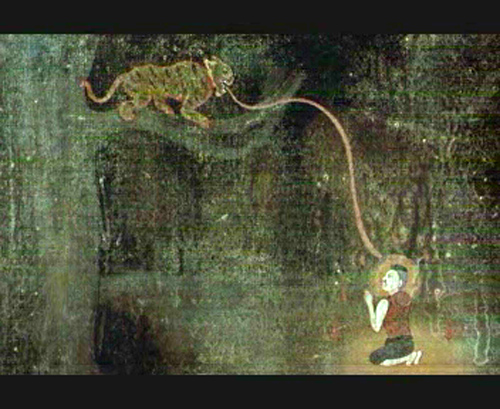 As gay men, Tong and Keng exist on the margins of Thai society.  Tong lives in the forest and Keng works in the forest as a soldier.  Keng is better integrated into the mainstream of Thai culture because he is a soldier.  A traditionally masculine role.  Indeed, when Tong applies for jobs he does so dressed in a military uniform, as though superstitiously hoping to ward off the kind of discrimination against which GLBT Thais still have precious little protection.  Keng’s pursuit of Tong appears like a one-sided hunt.  He does all of the running while Tong remains aloof.  However, as with the soldier who realises that he is actually the one being hunted, Tong is actually seducing Keng without him knowing it.  His coquettish charms and childlike behaviour not only woo Keng, they hopelessly inflame him.  Here is a proud and handsome man reduced to sniffing Tong’s fingers on the grounds he had just been holding his cock.  Much like the shamans of myth, Tong is a transgressive figure.  His values are not those of the Thai mainstream.  Despite being penniless ignorant farmers, his parents are completely accepting of Tong’s homosexuality.  They not only welcome Keng, they ask him to move in and help with the farm.  They treat him as a prospective son-in-law.  When the soldier finally meets the tiger, the tiger shares himself with the soldier.  We assumed that it was Keng who was the more experienced and the more worldly, but in reality, it is Tong who knows his own world and Keng who must learn its true nature.

Tropical Malady is an intensely beautiful film.  Apichatpong Weerasethakul is a technically superb director with an absolute mastery for tone and atmosphere but his true skill lies in his mis-en-scene.  Simply put, I cannot remember the last time I saw a film as well blocked as this one.  The cinematic fumble is as exquisitely choreographed as a fight scene, the limbs of the two characters snake in and out of each other like the trees and vines that dominate the visuals of the film’s second half.  Meanwhile, the film, already light on dialogue, could be viewed with the sound and sub-titles off, so perfectly observed and infinitely nuanced is the body language fizzing between Lomnoi and Kaewbuadee.

This is yet another GLBT film that puts the shirtless face-sucking of the gay indie film scene well and truly in its place.  It is a genuine work of art.