In my recent piece about Sauvaire’s Johnny Mad Dog (2008) I discussed the difficulty of attaining genuine cinematic realism.  But this makes a number of largely unwarranted assumptions about realism as a concept.

It assumes that there is a difference between something being factually correct and something being realistic.  Johnny Mad Dog might well express true stories about what it is like to be a child-soldier but this does not necessarily mean that it is ‘realistic’.  In fact, in my piece, I chide Sauvaire for allowing an editorial tendency to creep into the film.  I reasoned that because the world does not contain neat little truths, any attempt to present a cinematic audience with neat truths is unrealistic.  This suggests that realism is an entirely different formal quality than factual accuracy.  It assumes that ‘realism’ also carries with it certain aesthetic demands and formal demands.  This is, to put it bluntly, an idiosyncratic view.  It presents realism as an aesthetic and moral ideal that can be aspired to but almost never achieved :  Art, being artificial, is necessarily in some sense false.

For this piece, I have decided to look at the issue of realism from an entirely different perspective.  To present it not as an ideal but rather as an affectation, a stylistic quirk.  A quality that has only a tangential relationship with factual truth and almost no relationship whatsoever with the moral imperative to speak the truth and present the world as it really is.

What better place to start then, than with propaganda?  Art that is conceived precisely not as a means of telling the truth, but rather as a means of convincing people that a false vision of the world is in fact correct.  One way in which propaganda can be made more believable is if it chimes in some sense with the world-view of the people it is aimed at.  Propaganda films are works that are false but have that ring of truth.  They rely upon that ring of truth to be effective.

One of the best examples of this kind of film-making (along with 1942’s In Which We Serve by Lean and Coward) is Alberto Cavalcanti’s Went The Day Well? An absurdly fantastical every-day tale of valiant little Englanders banding together to fight off a cohort of brutish Nazi paratroopers dressed as British soldiers.

Let us get this straight right from the beginning.  Went The Day Well? is not a realistic film.  Its central plot is designed to flatter and to inspire the people who watched the film.  It romanticises not only village life but also the British class system, presenting both as idylls of happiness entirely devoid of anger, misery, envy or grief.  It presents the British people as saintly heroes before the main plot even begins. 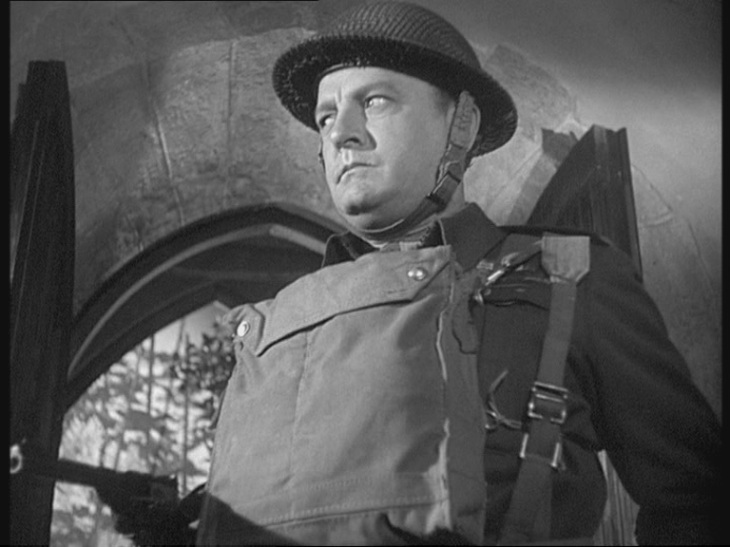 Its depiction of Germans is similarly fantastical as Basil Sydney displays a relaxed and easy-going manner while pretending to be Major Hammond only for him to transform into a swivel-eyed tyrant the second he reverts to his true nature as Kommandant Orlter.  “Silence!” he bellows, “Qviet you Fools!” he shouts, puffing out his chest.  Similarly, David Farrar is a handsome gent whilst posing as Lt. Maxwell but, upon becoming Lt. Jung, he soon becomes a swaggering sadist who gleefully announces that five children will be shot at dawn.  In fact, Farrar and Sydney’s performances as Germans are only slightly less absurd than that concocted by Ian Lavender for the episode of Dad’s Army in which the gang find themselves trapped in German uniforms.

However, while Went The Day Well? is clearly a fantastical film, it tries very hard to be realistic.  This is obvious from the opening scene…

The first thing you notice is the zooming in on a country road sign.  This is an attempt at using the iconography of everyday British existence to make the setting appear more real than it is.  This is not just some fictional town, the film appears to be saying, it is a real town.  It could be your town! 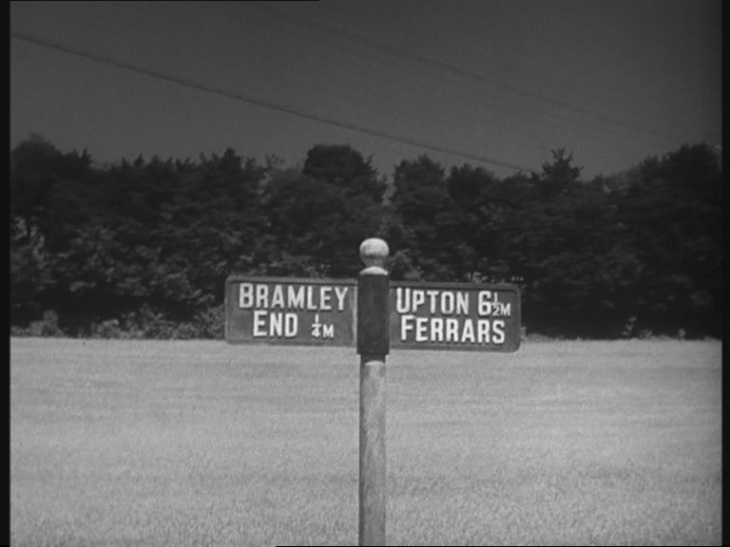 We then move along a country lane towards the town and, when we arrive in town we encounter a local who speaks directly into the camera.  The desired effect is clearly that we might have gone for a drive only to come across this little village with a big secret.  A secret, the local tells us, which only came out after the war.

A British Country-Dweller… from THE FUTURE!

This is a fascinating piece of script writing as Went The Day Well? was released in 1942 as a piece of war-time propaganda.  This suggests that the local is addressing us from some point in the future… a point at which Hitler had been defeated and Britain is victorious and at piece.  As a conceit this is a profoundly strange one, doubly so as it is never actually explained.  The film seems to be saying that the future is before the audience and it is inevitable that Britain will be triumphant and, at some point, the hardships and the secrets will cease.  In a film with such a strange set of ontological commitments and such a curtailed attitude towards truth, such messages from the future are accepted almost without question.
The film’s attitude towards realism is, ironically enough, perfectly encapsulated by a director who was operating in Germany during the Nazi years.  As G. W. Pabst said in an interview with Revue de Cinema after the war :

“Already in my first films I chose ‘realistic’ themes in order to show that I was a stylist.  Realism is a method;  It isn’t an end, it’s a means.”

What Pabst appears to be saying is that realism is primarily as stylistic quality.  If one wants to present ‘the real world’, one is making a choice about the style of one’s films, not their content.  This certainly fits with what I was groping towards in my piece about Johnny Mad Dog, what Pabst is adding is that the idea that realism is some kind of philosophical absolute is actually not a necessary part of the equation when it comes to achieving cinematic realism.  Whether one is trying to tell the truth because the truth must out or whether one is trying to make a film look realistic in order to peddle politically useful lies, the methods and the creative processes are identical.