For his fifth feature film, Maurice Pialat returned to northern France to take a second look at the disaffected youth that inspired him to make his first full-length film L’Enfance Nue (1968).  A spiritual successor to that film, Graduate First initially comes across as a work that is almost free form.  A work that takes its pseudo-documentary, cinema verite stylings to their logical conclusion by refusing to place a coherent narrative onto the lives of Pialat’s characters.  However, as with Nous Ne Vieillirons Pas Ensemble (1972), Passe Ton Bac D’Abord is a film that draws upon a deep, narrative structure that suggests that, while the lives of these young people may seem chaotic and random, these are the kinds of lives that people have always lived.

The film revolves around a group of working class kids.  Aged around 19, they are all in the final year of the French school system and are all – with varying degrees of commitment – hoping to achieve their baccalaureate.  We first encounter the group in gym class.  A teacher is explaining to the girls how to play handball before telling them to form up into groups, at which point the kids scatter likes seeds into the wind, forcing the teacher to tell one of the girls to go back to her group.  We then move to the local café where the same chaotic social ordering is also taking place.  Bernard (Bernard Tronczak) is dating one girl but has been spending his time seducing another.  Patrick (Patrick Lepcynski) complains bitterly about the quality of the local girls, singling out Elisabeth (Sabine Haudepin) for being “a little whore”.  Elisabeth is asking another boy to buy her a drink, while he heads to the bar she goes over and says hello to Patrick.  Needless to say it is Patrick and Elisabeth who are picked out by the headlights of Elisabeth’s father’s car while fucking in the bushes.

Patrick and the "little whore"

Maybe being a "little whore" is a good thing...

The lives of these young people appear ferociously chaotic ; They do not care about school, they do not care about work, they have no principles and they have no interest in even the modicum of stability that comes with sleeping with one regular person.  Their relationships and alliances are fluid and seemingly driven entirely by passing whims.  I say ferociously chaotic as these are not the chip-off-the-old-block tearaways that you find in films such as Francois Truffaut’s Quattre Cents Coups (1959).  The kids in Passe Ton Bad D’Abord do not dream of running away to be film directors, they dream of running away to Paris and living off the dole.  Indeed, the only class we see any of the kids interacting with is a philosophy class.  They are not rejecting school as a stuffy and oppressive milieu, they are rejecting abstract thoughts and bourgeois values as a whole, including teenaged rebellion.  Later in the film, Bernard discusses music with a middle class girl he meets on the beach.  He mentions that the group went to a night-club the previous evening and the girl reacts by saying that she prefers punk to disco.  Bernard is thrown by this.  Clearly he goes to night clubs in order to dance and get off with girls, the idea of music being some form of rebellion is completely beyond him.  The kids in Pialat’s film are not romantic rebels, they are drop outs.

However, amidst all of this nihilistic expediency, some alliances prove to be longer lasting.  Elisabeth, the most promiscuous of all the girls, eventually happens upon Philippe (Philippe Marlaud), a boy she likes enough to take home to meet her parents.  Elisabeth’s parents take to Philippe far more than Elisabeth does and they effectively make him a part of the family.  Initially, Elisabeth is pleased and rewards her mother with a smile and a kiss.  However, this is not true love. 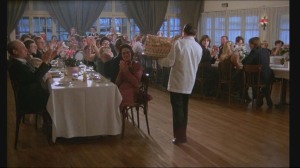 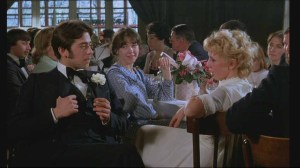 About half-way through the film, Pialat transports us to a provincial wedding.  In films such as Jean-Charles Tacchella’s Cousin, Cousine (1975), weddings are used as a means of pulling together the community and allowing them to bond over drink, good times and candid anecdotes.  However, Pialat uses his wedding to different ends.  Rather than renewing friendships, the wedding serves as a means of breaking them down.  Bernard admits to Patrick that he loves all of the local girls and hates it when any of them goes out with another man.  He then demonstrates his sexual possessiveness by trying to seduce first the bride (by taking off her garter and simply grabbing her) and then Elisabeth.  Needless to say, both girls respond to Bernard’s overtures and two seemingly stable relationships are compromised in the process.  And yet Pialat is eager to make it known that this is not unusual.  At one point some of the kids talk to an elderly couple and the old man admits that there had been many many other women since he married his wife.  He then adds, a little too quickly, that he did not love any of them.

The wedding dealt with, Pialat revisits the relationship between Elisabeth and her mother.  Where before, the mother’s acceptance of Philippe brought the pair together, here it drives them apart as the mother over-reacts wildly to her daughter’s flirtation with Bernard.  Clearly the ersatz-son had become the ersatz-lover as a member of the older generation was living out her fantasies through her children.  Indeed, this is one of the film’s wider themes.  We see it not only in the relationship between Philippe and Elisabeth’s mother but also in the comical attempts of a local café owner to seduce a teenager and the philosophy teacher’s lustful interest in Elizabeth ; Everyone wants a taste of the possibilities of youth and yet the young themselves seem to have very few possibilities open to them. 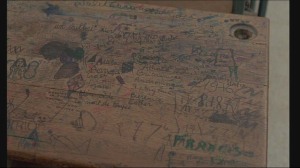 In the final act, the film’s cyclical structure reveals itself more clearly.  The film opens with images of graffiti-covered desks while a philosophy teacher delivers a speech about how it bothers him that people arrive in his philosophy class with fixed ideas.  The film closes with a number of the same kids sitting in that same philosophy class with the wedding sequence sitting precisely at the film’s half-way mark.  For all of their evasiveness, the kids have not escaped the system, merely wasted a year before returning to it.  And yet, Pialat refuses to allow his film to fall into a pro-education object lesson, as within seconds of the teacher finishing his speech, a now-pregnant Elisabeth is rolling her eyes and talking about how much school bores her.  The implication is two-fold : 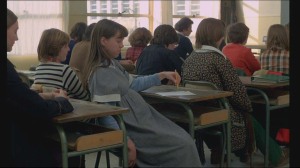 Firstly, the lives of these kids are not special.  Each new year produces another set of teenagers struggling unsuccessfully to find a place in the world.  The graffiti on the desks is layered and comes to resemble hieroglyphics which, when combined with the old couple at the wedding and the wistful backwards-looking parents, sends the message that life has always been thus.  Life is random and yet dictated by deep structural forces.

Secondly, it is all to tempting to examine life through a theoretical lens.  To see it as a kind of bildungsroman in which lessons are learned and decisions made.  However, real life is not a process of individual self-actualisation or spiritual ascent.  There is no learning curve or best way to find one-self.  There is only the gigantic labyrinth of blind chance and passing fancy.  What order there is to existence comes from entropy, it is the same order that comes to rocks caught in the tides, eventually they are all worn down and turned into sand. 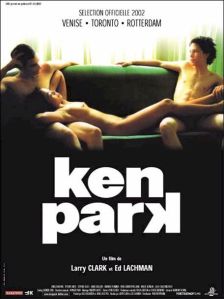 Pialat’s a-theoretical vision of life is beautifully complemented by the stark and yet strangely geometrical cinematography of Pierre-William Glenn and Jean-Paul Janssen.  It has also proved to be hugely influential.  Aside from more lightweight films such as Olivier Assayas’ Cold Water (1994) and Menhaj Huda’s Kidulthood (2006), the nihilism of Pialat’s vision of teenaged life can also be seen in much of Larry Clark’s output including films such as Kids (1995), Bully (2001) and Ken Park (2002).  However, a far more interesting comparison to think about is with a genre that might well have provoked Pialat in the first place. 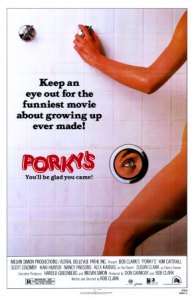 “Passe Ton Bac D’Abord” is an interesting title.  It has a ring of parental authority to it that is almost completely absent from the actual film.  The only time a similar thought is uttered in the film is when Elisabeth is caught fucking in the garden by her father and even then it is a reproach filled with fatalism.  Indeed, the title itself could almost be read as light-hearted, a spirit present in the cartoonish nature of the posters.  Like most other countries, France has a long history of what can only be called sexual farces.  Comedies such as the Porky’s and American Pie series that focus on a bunch of horny teenagers getting off with each other.  One of the giants of the French sexual farce genre was former porn director Max Pecas who, from the early 80s onwards, produced a trilogy of films along these lines set in Saint Tropez.  The difference between these kinds of sexual farces and Passe Ton Bac D’Abord is not one of subject matter but rather of tone.  In Porkies, the priapic teenagers are played for laughs, their shenanigans taking place in a 1950s world in which there are no consequences.  However, in Pialat’s film, there are consequences for teenaged hedonism and it is the same set of consequences that apply to each new generation, forever squandering potential, creating misery and forcing people into the unhappy relationships that make-up every day life.  Pialat’s attitude to this idealised adolescence is reminiscent of Fellini’s Casanova (1976), a film that de-romanticised the great seducer, reducing him to a shallow imbecile forever chasing the closest orgasm until he finds himself as an old man desperately trying to get it up with an automaton.